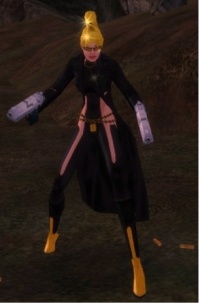 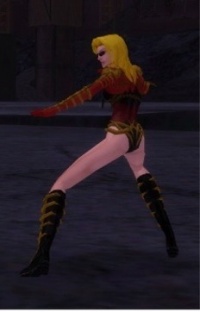 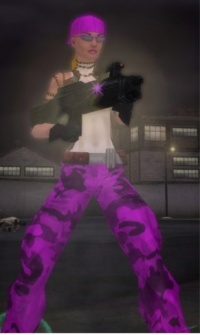 Autumn is a young woman, recently adopted by the scientist known as Cerenkov. She has been making a name for herself in the Isles as a dancer, bartender, and mainly a killer for hire. She is a proficient marksman with all of her weaponry. Dancing has honed her body, allowing her to react swiftly, enhancing her reflexes with fine muscle control. Using the flow of her dancing, she can make her body into a deadly weapon.

She goes by several aliases among the Isles.

Under her Leaves of Autumn alias, she is frequently seen in black trench coat and black lycra body suit. She carries her 2 Browning Hi-Powers, as well as her Revolver, Knives, Derringers, and poison accessories. She also is seen with several bodyguards at her back for when she bites off a bit more than she can chew.

As Flames of Autumn, she wears a lycra ballet suit strapped down with gold metal spines, skulls, and chains. The outfit leaves her legs free to move unhindered while fighting, dancing away from gunshots, baseball bats, and other tools of destruction. She also carries her derringers in her boots, as well as hidden knives.

Flowers of Autumn is the alias she uses while running around in army gear. Pink camo pants, white t-shirt, stilleto combat boots, tactical belt and shoulder holsters make up her outfit, carrying her various forms of weaponry along with a shoulder strapped assault rifle.

Under all her guises, she carries a wicked Axe that slays the souls of undead beings.

Autumn co-owns and manages a bar and grill, In the Loop, alongside her mother, Cerenkov.

Autumn is a hot headed, blond girl who hates being talked down to. Often, her size and physical attractiveness makes people underestimate her, and that pisses her off as well as pleases her. It makes her seem like less of a threat to most people, which is advantagious most of the time. However, in the times that need intimidation, it pisses her off to no end that she isn't taken seriously until she actually puts a bullet into someone. Which she is all too happy to do.

She's a self described gun freak, collecting whatever weapons she can get ahold of. Especially if it requires gun oil for upkeep. She loves violence, and loves dancing, which gives her a volatile grace. When she walks, it's graceful, like energy contained. Just waiting to explode out at the first person to look at her the wrong way.

Being a natural born human, Autumn has no powers whatsoever. Instead, she has learned how to fire pistols since the age of 6, use her body as a deadly weapon while learning to control her muscles while dancing since the age of 4. She is a natural marksman, and a deadly fighter in hand to hand.

Reflexes fined tuned through dancing allow her to sidestep bullet fire and hand to hand combat while a proficiency in various and delivary systems grant her some strong defensive capabilities.

Being a vanilla human, Autumn's weaknesses and limitations are rather obvious. Mind control powers are her bane, and she very often will shoot someone who she might even just suspect is using mental abilities to control her. Having superior reflexes than most normal humans is no help against the super speeders that can move faster than she can blink. It doesn't stop her from trying, though. 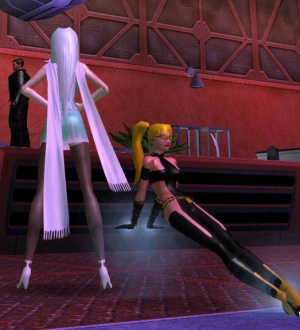