After hitting 50 on our heroes, CC and I decided to roll up villains together. We invited Jinks and JT to create villains with us in order to make the greatest villain group to ever roam the Isles.
Originally created solely for RPing with the Breakouts, Bioshift has become one of my favorite characters. He's a blast to play in any situation, be it RP, PvE, or PvP.
The Brutal
Bioshift
Weapon of Mass Destruction 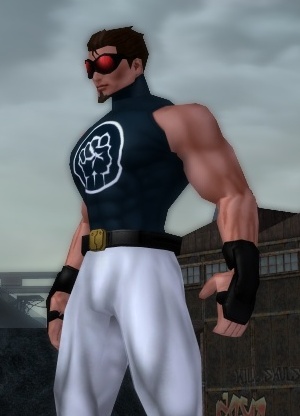 Some people are born with a silver spoon in their mouth. Everything always seems to go their way and they never have to work for anything. Derek Prewitt was never one of those people. Born to an already broken family, Derek lived with his mother. They were never very well off, despite his mother working double shifts at the hospital. Their situation led Derek into a life of petty crime. It started off with minor crimes like pick-pocketing and purse snatching, but soon led to larger felonies like breaking and entering. The money he gained from his escapades was used to buy food and other necessities. His mother never asked where he got the money, and he never told her.

Derek knew that a life of crime was not what his mother had planned for him, so when he graduated, he enrolled at the local community college. Derek was never the smartest kid in school, but in college, it became apparent that the white collar life was not for him. He dropped out of college and went to find a job down at the docks near his house. It was at the docks that he slowly started to fall back into his life of crime.

What are you in for?

Getting sent to the Zig turned out to be a lucky break for Derek. It was here that he met the men that would become his teammates in the group known as the Breakouts. With their help, Derek broke free of the Ziggurat and escaped to the Rogue Isles. He and his teammates have plans to make a name for themselves in the Isles and ultimately, Paragon City.

Halfway (Mason Maddox): The lunatic known as Halfway and the man known as Mason Maddox are a mystery to Derek. Although clearly one person, their personalities are different enough that they could be from different planets. While Halfway is bloodthirsty and a great addition to the team, Mason is more held back. While Derek has become fast friends with Mason, he thinks that Halfway is a greater asset to the team.
STATUS: Deceased

Webspider (Kenneth Rockwell): The leader of the group as well as co-founder. Kenneth is a natural leader, too bad Arachnos didn't see this potential. Derek sees Arachnos' loss as his gain. He's sure that Kenneth has his own hidden agenda, but he hasn't figured out what it is. Until he does, he's happy enough working with the man as long as the money keeps rolling. Derek calls him Kenny.
STATUS: MIA

Hideout (Clancy Callahan): A thief with the ability to render himself invisible. Clancy is a scout of sorts for the group, often running ahead to assess the plan of action. He's only interested in the money, usually putting him at odds with Derek and Mason who love to investigate their conspiracy theories. Derek loves to piss him off by calling him 'the Clanceman' and alerting their foes to his whereabouts while he's invisible.
STATUS: Unknown

Unfortunately, all good things must eventually come to an end. With the disappearance of Webspider, the Breakouts began to drift apart. The three remaining members eventually went their separate ways and Derek was left alone and without a purpose. He began hiring himself out as a bodyguard and mercenary. He eventually caught the eye of businessman and politician, Sebastian Kain, who approached him with an offer.

Kain was building an army, and he wanted Derek to be a part of it. Wary at first, Derek eventually agreed to join Kain's new era after realizing that it would give him money and power, two things he was in desperate need of with the disbandment of the Breakouts.

Shortly after the Breakouts disbanded, Derek met the super powered thief Airbound when they both tried robbing the same bank. Derek fought his way to the vault, only to find that Airbound had already sneaked into the vault room and was in the process of bagging the money. Knowing they only had a short amount of time before super powered forces arrived to arrest both of them, they decided to team up and escape together. After their successful escape, they decided to split the loot 50/50. They were about to go their separate ways when Derek pointed out how well they worked together. He also pointed out that they would be able make a lot more money if they pooled their skills and resources. Intrigued, Airbound agreed to run a few more heists with him. Soon they had hit half the banks in the Isles and had recruited several others to join the team. News reports began referring to them as the Bankbreakers as they made their way into Paragon City.

There are several words to describe Derek. Brash, arrogant, and impulsive. He acts out for attention and his biggest fear is that no one will acknowledge him.

Ultimately, Derek is a very lonely person. He grew up with just his mother and very few friends and because of this he has never been very close with anyone. To compensate for this, he is extremely loyal to his teammates, and even more so to the ones he considers his friends. He will go to great lengths to make sure they are happy, even at his own expense. This may also extend from a desire to not be like his father, who left his mother when she became pregnant.

Ever since he discovered his powers, Derek has been firm believer in "might makes right" and "brawn over brains." Derek has adopted a policy of "hit first, ask questions later" and will usually act without thinking, much to the chagrin of his teammates. This usually forces them to enter the fray a little early in order to assist him. It also makes him very bad at sneaking around.

Skills to pay the bills

Brawling: Without his immense strength to fall back on, Derek has learned how to fight more efficiently, as well as how to fight dirty.

Nanite Armor: The spinal graft that saved Derek's life is full of nanites that he can command with his mind to form an armored carapace around his body that protects him from conventional weaponry.

Superior Strength: Derek's strength is still classified as superhuman, but it used to be directly tied to his muscle mass. Therefore, the bigger he got, the stronger he got.

Body Shifting: Derek had the unique ability to change his height, weight, and muscle mass. With enough concentration, he could even change his body's density, making him literally invulnerable to most conventional attacks. The technology that is now fused to his spine prevents him from shifting.

The Serum: During his time with ERA, Derek became addicted to a serum that could boost his strength to unheard of levels. It was extremely addictive, but thanks to Dr. Metzger, he has been cured of its effects.