"there must be a balance, i am part of that balance even if i must be the darker part of it" -BlueRevenant

BlueRevenant grew up a lonely life, he had a hard time making friends must people seemed to ignore the young man; he spent most of his time studying magic, lost in his loneliness he tried to make a spell that would unite the human race together so he never be alone again "think of it, the internet in your head, no one would ever be alone again" He failed, his actions were pure but he only did it out of loneliness. He only united himself with the raw power of dark magic, the failure lost him his eyes and secluded him from people forever. Feeling this dark magic it was the only path left to him he used it and mixed it with his own magics. Following the path fate gave him he became BlueRevenant.

while in the weak state of knowing little of how to use his powers the Legacy Chain had blue arrested and thrown in the Zig, he was put in isolation and where they hoped he rot with his powers, but he broke out with a good number of other villains. After breaking out of the Zig he started his training under a vampire known to him as Kain. He learned to master his powers and use his old spells in combat; even mastering teleporting. But the life of a vampire was too long for a mortal such as Blue, so he left this master. At the same time Rikti started attacking cites around the area, Blue helped battle the threat.

Rev joined The Supreme Society where he met many new people for the first time. At the time Blue was sleeping outside. When Eiko-chan found out she built him a bed in the base which later grew into his own room; with that Rev gained his first major friend, as such he's very protective of Eiko and lets her get away with things he won't let others. Shock-Front who shares a fate similar too his has also become a friend. with his hatred for mindless killing and the feeling of pity towards his foes has set him at odds group mate Hymnal almost attacking him at one point, thankfully Eiko calmed him down. 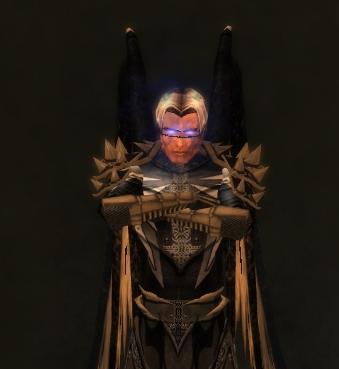 seeing talent in Rev, Ghost Widow asked him to prove himself to her, he passed every test she set for him, seeing a chance to further his training in the magic arts he started letting Ghost Widow assist in his training. With her help BlueRevenant is now learning to use his dark magic to control souls other then his own

BlueRevenant is a master mage who knows a lage number of spells focused on magic barriers and teleporting; but a few other tricks as well. Because of his union with dark magic he can cast dark spells without even thinking, as well as creating undead servants by fusing the parts of his soul the dark power holds into the body of the dead, if one dies he can reuse the soul and put it in another body.

With the loss of his eyes he sees exclusively through magic, as such he can see in a 360 degree view as well as being able to see the magic presence on a person, and even some mild forms of hide

BlueRevenant is a sad soul, as such he feels pity for most people he fights and kills. He knows what he is doing is wrong but thinks it needs to be done to keep a balance in magic.

Blue's soul is lost to the Dark Magic; as such he greatly fears his death knowing his spirt will not move on.

He feels alone in the world at all times, and may be losing his mind to it.

Keeps a close eye on Nemesis Red, feeling there's a demon inside him that may cause much damage if it where to take full control. He sees Tim's soul as lost, and wishes to let Red and Tim keep living like they are without outside interference

Inspired by many sad anime villains