Are you looking for something that we don't have? Are you not satisfied with any of our products, but are still looking? Then take a look at what Nightingale Technologies has to offer for you! Their focus is on Robotics, and they won't fail you! -Evan Rengada, CEO of Centari

What is The Centari Corporation?

The Centari Corporation is a Paragon Founded business that has spread world wide, maintaining key offices in Germany, US, Russia, Japan, China, Africa, and their main office located in Aeon City, Cap au Diable, Etoile Islands. We provide a range of services and products such as, and not limited to, Robotics, Bionics, Weaponry, Defense Systems, Computers, and a Spectrum of Household and Domestic appliances. The Centari Corporation is run by it's CEO, Evan Rengada; run along with a select board committee.

Centari provides Robotics for various roles. They are made of a Steel Alloy with a 5% Impervium Mix, for stability. All robotics are run off of an Android Version of WaveOS, an extremely stable Operating System, flexible to cover almost all Electronics. 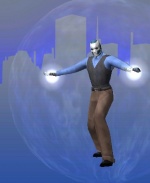 The CU-075 has Pseudo Nerve Endings installed to aid in Child Care and Simple Household Chores. This particular Unit is wearing clothes to simulate Human Example.

The Zero Series is a series of robotics designed to do simple tasks, such as, and not limited to, Office Work, Cleaning, Construction, Child Care, Driving, and all Household tasks.

Often known as Centari Bots, these androids are build with a non-heuristic processor and AI, with a Zero Chance for them to become "Self-Aware", a rumored state of Machines. They are equipped with basic weapons for Civil Defense. For Military Defense, or properly licensed customers, the CU-100-500 Series is upgraded to Advanced Basic Weaponry, such as Turrets, Flamethrowers, Electric Generators, and Simple Plasma Cannons.

These machines are state of the art. Most are equipped with Advanced Weapons compared to the Centari Bots, such as Complex Plasma Cannons, Ion Cannons, Missiles, and Impervium Melee Combat Weapons. Select Models are able to protect themselves from more attacks than the Centari Bots. They are capable of such by generating Kinetic Fields, installed with Regenetive Materials, or programmed and built with Meta-human Reflex capabilities. The best known model for this series is the CU-790, able to summon and command 100-500 series robots.

It is said leaders are born, we have proven that wrong. Programmed with Semi-Heuristic Processors, they are able to analyze the battle field and lead troops into battle, with minimal chances of becoming Self Aware, equipped with Fail-Safety Mechanics, inaccessible from the Unit's control. These units are equipped with State or the Art weapons, and are even capable of generating advanced Kinetic Shields, Plasma Shields, Super Meta-Human Reflexes, and Involuntary-Teleport Resistant Materials. These machines do not fall well or quicky in the battle field and are estimated to last 6 years of pure fighting, no breaks.

Under current development, these deadly units will stalk the air in enemy zones with deadly turrets attacked on both side of the aerial predator. Equipped with many different Visual Senors, it can seek and hunt targets land units cannot. The current CUAS that is completed it controlled by Human Control - however, our main Self-Functional CUAS will be ready in near 2011!

Under current development, these deadly aquatic machines will be able to scout the vast oceans and secure ocean areas in times of war. Equipped with Deep Sea Turrets and Torpedoes, these machines can destroy enemy vessels with ease. We currently have a Submarine Version of a CUAD, under Human Control - however, our main Self-Functional CUAD will be ready in near 2011!

The CMachine is a series of Computing Hardware. Hundreds of models exist, varying from Gaming Systems, Office Systems, Super Computer Systems, and much more. Made for the WaveOS from Centari, they are compatible with every known OS to man. CMachines are used in very Centari Office world wide. They are also cheaper than traditional computers, and more ecofriendly. Their Hard Drvies (HDD) are not made with magnetic materials, ensuring a Zero Chance of data loss due to Magnets.

Wave OS is a new Operating system of it's kind. Installed on computers that are made for WaveOS, Boot Up Time is virtually gone. The OS itself uses virtually no RAM. It naturally has a Firewall with it, WavePool. It is popular among the Rogue Islands, Germany, and Japan for gamers, due to minimal Graphic Errors and spare RAM for a Lag-Free Play! WaveOS is also an excellent choice for Offices World Wide, as communication is near instant, and Internet Popular Viruses do not affect WaveOs Networks in the slightest. WaveOS has many varients that allow it to be installed onto Powered Armor, Andriods, Super Computers, and even DVD Players.

WavePool is a new firewall, first of it's kind. Traditional Viruses just need to get past one wall, and it has access to all of your files. WavePool fixes that problem by adding a firewall to your overall System, then each individual file on your system. If one file is infected, it is easily found and isolated. This leaves viruses to the known world defeated to a WavePool Secured computer. when buying a CMachine with WaveOS, WavePool comes with it free of charge. WavePool is compatiable with all OS's, and requires less RAM than traditional Firewalls that only offer one layer of protection. WavePool also is available on the Mapple iPod, on any Gen, with a simple app!

The current Bionic Catalog is too long to place upon this mirror site. If you name it, it's most likely we have it!

Centari makes excellent household appliances that outdo in performance than most leading brands, and outlast them by far. Designed and Built with careful precision, our appliances use less energy and uses energy smarter than most appliances from leading brands, period. These products vary in spectrum as well, and are not limited to: Dishwashers, Laundry Machines/Dryers, Televisions, Blu-Ray/DVD Players, MP3 Players (Our famous WaveMuse), Exercise Equipment, Coffee Makers, Central Heating, Lights, and even transportation (ie Cars, Boats, Motocycles, Bikes, etc.)

Noteworthy in the Rogue Isles, and many places else in the world, The Centari Corporation runs a Mercenary Centre. Here, people are hired to do tasks that involve acting as a local police, bounty hunters, and even Militia Hired Hands. they can even be hired to run errands that you don't want to do! Payment Rates vary per area and the Task Difficulty also changes Cost Factor. People who are hired are run through a thorough background check, and are enforced under strict non-lethal regulations. People who work for the Mercenary Corps can be various Magick Users, Divine Representatives, Martial Artists, Weapon Masters, Technological Advanced Mercenaries, and more.

The Centari is proud to affiliate ourselves with the following grand customers and partners!

This rank can only be held by one person, and who better than the very own CEO of The Centari Corporation, Evan Rengada?

This rank can only be held by those of great importance to Centari. They have a say on how the Company goes and how they go about it. Board Members are nominated either by the CEO or a group of Board Members,

Those who have put a lot into the progression of Centari, receive this ranking. They have the power to command people of Director Ranks, and often lead whole divisions in Centari.

People who have proven themselves within Centari can obtain the rank of Director. A Director has almost the same power as a Trustee, just a little less. Obtaining a Director rank is the highest, non corporate rank achievable. Directors are in charge of whole divisions, whom also often work with Co-Directors.

A supervisor has shown talent to manage and conduct whole teams with ease and precision. They are given responsibility over small teams within a division. Supervisors often lead with Co-Supervisors.

A fresh member within the Centari Family! When any one person is hired, they are an Employee, unless certain and often rare special conditions are met. They are lead under Managers and Directors, and have rare contact with Corporate Ranks, in comparison to the rest.

As a member of Centari, you must show respect to everyone, even if you don't like the person IC or OOC, please at least show some decency of respect. This also applies to people not in Centari, the Centari Corporation is an IC Business, and cannot(and will not) survive if our employees and leaders are rude to "Possible Customers" or "Future Employees". This also means no OOC Drama, we have seen how OOC Drama can tear apart VGs or end them, and we enforce a Zero Tolerance Rule of OOC Drama.

Obviously, on a RP Server, there will be text fights to settle issues that can't/won't be solved in the Arena. We ask if you partake in text-fighting, you do so that does not involve: random attacks, harassment, or bullying. We also ask you to not God Mode. It is rude and completely unfair. We also ask you to be aware of Responding Posts, so you don't miss a response. Do not knowingly ignore attacks from an aggressor, will it not only bring down your reputation as a Role Player, but as well as the reputation of The Centari Corporation!

If you are entrusted with a secret, whether it be a VG Secret, RP Secret, or even a Personal Secret, we demand you keep it to yourself or in the walls of Centari, depending on the severity of secret. Any RP Secrets that are leaked into the public will not be tolerated. We work hard on our Arcs, too hard for them to be flashed around. Do not tell even Coalition Members RP Secrets unless directed to by Centari Officials.

Pages in category "The Centari Corporation"