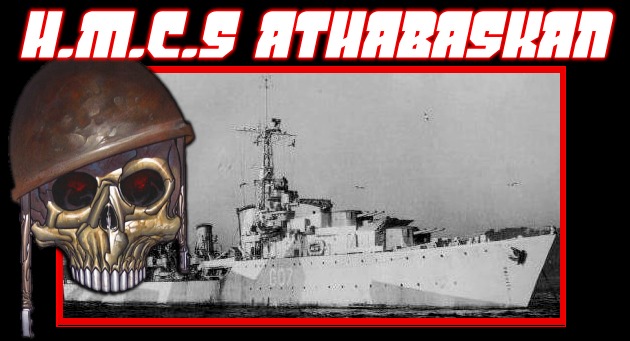 'On all the oceans where whitecaps flow,

There are no crosses, row on row;

But those who sleep beneath the sea,

sleep in peace...your country is free'

Colonel Grim here...I got a tale to tell you, so pour yourself a glass of your favorite beverage, and let me tell you what I gotta say.

The HMCS Athabaskan was a Tribal Class Destroyer. She and her sister ship (the Haida) were trim, responsive and quick to the helm. They were a new breed of warship for the allies; fast but with enough weapons to fight her way out of trouble.

They could hunt the submarines plaguing the Atlantic, those submarined stopped food, medical supplies and other vital material from reaching England.

The ships were hunters - and they fought valiantly.

The Athabaskan seemed cursed from the start. Unlike her sister the Haida; she broke down - and had problems. They said the crew all took ill at one point; but still they fought, sweating in 100 degree fevers and fighting for freedom.

She sunk on April 29th after a German destroyer hit her with a torpedo. At least that's what the 'official' story says. I know the truth; I know how and why she really went down; but it's one of those secrets the "democratic" governments of today don't want you to ever find out about.

The Athabaskan sunk fast, and there were over 100 men lost, including the Captain John Stubbs. Most of them died burning in flames, or stuck in the boiler rooms crushed by the weight of the sea. They knew the secret, they knew why they were going down - and they knew their tale would never be told...

Restless spirits now dwell in the rotted carcass of the Athabaskan. She was a tribal class destroyer with fairly heavy guns for a ship her size.

The lost sailors of that lost ship now wander the waters where she sank, consumed with a secret about her sinking; a secret they refuse to tell – and a secret that fuels their undead energy in the after-life.

I was approached by Captain John Stubbs, just one ghost talking to another – and he claims his long-dead crew still hunger for service; still hunger to “right some wrong” that they refuse to speak of. They’ve asked to join my Ghost Patrol – and in return offer their ship: the HMCS Athabaskan for their service.

She’s a ghost ship now – and we’d need to excavate her living remains from the bottom of the channel, to enact the spell to make the Ghost Ship appear in material form. Iroquois can handle the arcane part – and a mercenary crew can handle the excavation.

It would put an undead Ghost Ship at our command – a ship we can use to travel the seas; explore the world and defend our nation.

It can only operate at night however – and remains haunted – possibly cursed; but Stubbs assures me the curse only affects the undead crew.

My question to the team is: do I go ahead with the excavation do we want a Ghost Destroyer from WWII at our command?

Do we want to unravel the riddle of the Athabaskan? Do we want to take on the cursed? Take on the damned and follow them on their road to retribution and closure?

Is the Athabakan worthy of Alpha Squad, can the dead redeem the living and bring justice back to this cherished world?

They say dead men tell no tales - the fools who said that never met Ghost Patrol.