Alpha Squad's primary mission is to serve and protect the mysterious nation of Cobiness. This country, located in the Arctic Circle near Baffin Island, is gathering science and magic to form a united defense against the Rikti and Arachnos.

This group has heavy doses of "science fiction" and "fantasy" blended together, and takes much of its inspiration from Jack Kirby's "New Gods", or Marvel's "Guardians of the Galaxy". It also pays homage to Wolfman's "Crisis on Infinite Earths".

We are a role play group, that plays mostly on the weekend (Saturday and Sundays 6-10PM PST approx). We are geared towards players and alts that can't play everyday, but do want to spend a few hours a week role playing on weekends.

We also have a Guild Portal Site for more information on events.

If you are interested in joining our cause send a tell to @Ravyna in game, or leave a message on the discussion tab of this page!

NOTE: This space provides the very latest RP events related to the group. We catalog these events by creating "issues" of an Alpha Squad comic. (Last Update: December 17, 2009)

Ragnaut, Vor Bodil, Alastrina Psyche and Nebula Man delve deep into the sewers of the Rogue Isles to find the location of the new secret base of Medusa. Rikti drones attack them them when they arrive on Rogue Isle.

After the battle, Mars Five finds a bypass to his psychological dampeners and demands he immediately be promoted to leader of Alpha Squad. He has to be subdued by Vor Bodil who imprisons him. During the scuffle, Cobra Fist manages to escape from Alpha Base.

This means, Doctor North comes back from an inter-planetary excursion to find a dangerous prisoner has escaped, his Chief Science Officer has been imprisoned and his team unable to find the new headquarters of Floral Madness.

((This section documents many of the events we have roleplayed as a team since the formation of the super-group on March 1, 2009))

On March 1, 2009, the newly independent country of Cobiness declared a unique and revolutionary defense strategy for their country.

They vowed not to invest in a standing army or any conventional weaponry. They instead dedicated their entire defense budget to the acquisition of meta-humans (super heroes). To coordinate the plan they turned to their U.N. Ambassador (Doctor North) to formulate the plan.

Doctor North appointed his friend Cobra Fist to manage the day to day operations of the group. Cobra Fist began by secretly building an underground base underneath the arctic tundra of Cobiness. 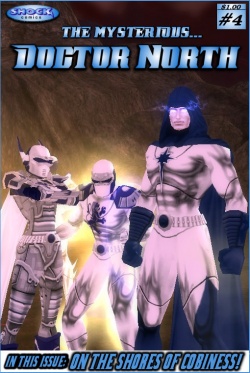 While the nation of Cobiness remains democratic, they are also wary of their valuable technology and limited resources for adequate defense, and thus they justify empowering superheroes to bypass as much bureaucracy as possible to thwart evil and fight for justice.

On February 24, 2009, Doctor North rescinded his American citizenship to become the ambassador for the fledgling nation of Cobiness. His role as ambassador to the United Nations for this new nation now affords him diplomatic immunity.

The details are sketchy but the Paragon Times provided the following news release:

Doctor North had been working feverishly to prevent the detonation of the Psychic Amplification Explosive Device (PAED). The Paragon Times had been reporting this incident, since the first small sample of this device exploded in Brickstown just a week or so ago...

The invasion was later repelled due to the hard work of such heroes as Ragnaut, Alastrina Psyche, General Bloodrain and Doctor North.

The PAED scare was averted, and Alpha Squad no longer considers the Supreme Society much of a threat after the crisis was averted. 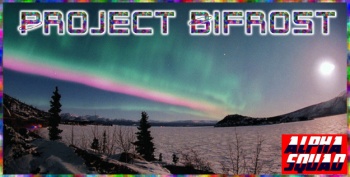 After the PAED scare and the defeat of the Supreme Society, Alpha Squad initiated the Project Bifrost project. This was a top-secret project masterminded by Doctor North and Mars Five to summon heroes from all over the Milky Way, using a sophisticated satellite.

Press release on the satellite's launch can be found here...

You can also read more about Project Bifrost here.

A TRAITOR AMONG US 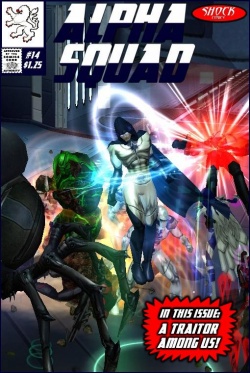 She claimed the organization was being watched by the CIA, KGB and Interpol - and even Freedom Corps, fearing the advanced technology and alien allies that Alpha Squad were gathering.

Several low-level members of Alpha Squad, (Rockk, General Bloodrain, Coma-Girl and Azalea Iris), were dispatched to see what Janice knew at one of the satellite offices of the Paragon Times.

They discovered that Arachnos had taken over the entire building and had rigged time bombs to blow up the building. Alpha Squad deactivated the bombs and arrested the Arachnos agents (led apparently by the nefarious Red Widow). The event however, signaled that Janice's evidence was highly valuable, and that Arachnos was somehow linked to the traitor within Alpha Squad.

The story continues is issues of Mars Five, Azalea Iris, Pi Tau and Cobra Fist and was one of the most comprehensive story arcs in Alpha Squad history.

After several battles, calamities and the near-death of Azalea Iris; Mars Five sets up a trap for Ghost Widow and Floral Madness. He hacks one their spy satellites to make it look like the mysterious double-agent had left a message there with security codes to Alpha Base. Floral and Ghost take the bait, but find that key members of Alpha Squad are waiting for them. In the end, an epic battle involving Doctor North, Pi Tau, Vor Bodil, Azalea Iris, Rockk, Coma-Girl and General Bloodrain reveal that it was Cobra Fist who had turned on Alpha Squad.

Cobra Fist and the agents of Arachnos are defeated and Cobra Fist is placed in a high-security prison inside Alpha Base.

The aftermath of the "Traitor Among Us" cross-over story arc, led to Ghost Widow ordering an entire legion of troops onto the shores of Cobiness. A massive battle ensues, where Alpha Squad learned the purpose of the legion of troops was not to take over Cobiness but rather trick Alpha Squad into activating dimensional traps, that transported them to Ghost Widow's tower.

The crew are able to escape Ghost Widow's tower, due to the help of Chaos Red. He is able to infiltrate the tower and he hacks into the security system to open the cell doors holding Alpha Squad. Now free from their cells, Alpha Squad are able to fight their way out of Ghost Widow's Tower. During the fighting, Vor-Bodil is seriously wounded.

Free from Ghost Widow's tower, Alpha Squad find themselves stranded on Rogue Isles. So they ask for Chaos Red's help again. He leads them to a series of caves and sewers underneath Rogue Isles, that are run by giant humanoid snakes. They learn to their amazement, that a large faction of these snakes worship Cobra Fist as a god. They find a teleporter Cobra Fist was using to transport himself from Cobiness to Mercy Island. They are able to activate it and get home.

SAVE AZALEA IRIS
File:Alphasquad17.jpg
Issue 17 of Alpha Squad deals with the fact that Azalea Iris has been poisoned. It begins with a trip to Azalea's homeland called the Emerald Forest. The story continues in issue #7 of Rockk who learns the forest is apparently his homeland as well.

Alpha Squad returns after their escape from the Rogue Isles to learn that Azalea Iris has been poisoned by their prisoner Cobra Fist and is dying. They decide they must travel to Azalea Iris' homeland to seek a cure.

There, they meet with an ancient druid named Celeste, who agrees to help them. Along the way they are ambushed by Bush Trolls, (who now own the forest and consider Rockk as their lifelong enemy). They defeat King Troll and escape with a potion made by Celeste to cure Azalea Iris.

On the way back to Earth from the Emerald Forest, the Circle of Thorns grab a trace on the particle beam used to transport the group, a beam established by an Avatar of Isis. They use the trace to bring several evil creatures from the Emerald Forest to Earth, and use it to steal the potion that will save Azalea Iris.

On October 6, 2009, Alpha Squad tricks their prisoner Cobra Fist into revealing the location of his secret base. They travel to the base and defeat the fledgling coalition that has formed against them. Alpha Squad destroy the base utterly and the victory costs Cobra Fist and Floral Madness millions and is a huge setback for their plans. (NOTE: Documented in Issue 18).

However, Floral Madness rescues some of the more prominent recruits in the base and promises she'll return even more powerful than before. While Cobra Fist remains imprisoned in Alpha Squad's base, Floral Madness vows Alpha Squad have not heard the last of MEDUSA!

With MEDUSA temporarily set back, Alpha Squad focuses on the plight of one of their members: the enigmatic Doctor Zar. Zar derives from another time-space dimension where Earth is ruled by apes, and humans still live in caves. However, his dimension (called Earth-Delta) is invaded by the evil Rikti and his Simian race becomes subject to mass genocide and vicious scientific experimentation.

Zar issues a plea to Alpha Squad to help save his home planet (Earth from another dimension often referred to as Earth-Delta). To help Doctor Zar, Alpha Squad penetrate a Rikti Base to capture a portable Transit Beam which will reliably transport Alpha Squad back-and-forth from Earth-Prime to Earth-Delta.

The battle with the Rikti is particularly harsh but Alpha Squad is successful, setting up next week's adventure where Alpha Squad travel directly to Earth-Delta and aid the Simian Resistance Movement, led by Doctor Zar.(NOTE: Documented in Issue 19).

The mission is a massive success, due largely to the hard work of: Doctor Zar, Vor Bodil, Alastrina Psyche, Nora Culrive, Ragnaut and Nebula Man.

Doctor Zar agrees to stay behind on Earth-Delta to help strengthen the Resistance Movement and continue the war against the Rikti from his home planet. The rest of Alpha Squad returns to base, triumphant and victorious. (Issue 20).

Ragnaut, Vor Bodil, Alastrina Psyche and Nebula Man delve deep into the sewers of the Rogue Isles to find the location of the new secret base of Medusa. Rikti drones attack them them when they arrive on Rogue Isle.

After the battle, Mars Five finds a bypass to his psychological dampeners and demands he immediately be promoted to leader of Alpha Squad. He has to be subdued by Vor Bodil who imprisons him. During the scuffle, Cobra Fist manages to escape from Alpha Base.

This means, Doctor North comes back from an inter-planetary excursion to find a dangerous prisoner has escaped, his Chief Science Officer has been imprisoned and his team unable to find the new headquarters of Floral Madness.