Ikpirajuk, Cobiness - A bizarre and mysterious satellite was launched into high orbit today by a renegade nation, funded by unknown sources. In response to the launch the United Nations ratified a resolution condemning the new nation of Cobiness for their unauthorized rocket launch.

The resolution which passed overwhelmingly (only Norway and Cobiness voted against the resolution, with one abstention), criticized the new rogue-nation for their rapid development of new technologies without consulting other nations on their dangers. Cobiness has received an avalanche of wealth from unknown sources and has developed at a rapid pace. This has many military experts worried, especially considering the nation’s relatively weak defenses. 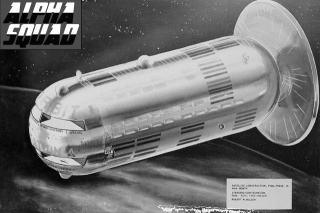 An organization called the Supreme Society launched an invasion of the country just last week, and while they withdrew quickly they were able to penetrate the nation’s weak defenses and kidnap their leading citizen, the famous super-hero: Doctor North. Paragon Times reported a few days ago, that some super-heroes are contending that Doctor North is now dead, these reports are unconfirmed.

Despite the lack of security, and the dangerous and mysterious nature of their technology, Cobiness went ahead with their Friday the 13th launch of their new solid-fuel rocket into high orbit of the Earth. A spokesperson, for Alpha Squad (the new security agency of Cobiness) offered this brief and official statement:

“At 6:00 AM Eastern Time, on Friday March 13, 2009; Cobiness successfully launched a peaceful satellite into high orbit. We wish to stress our satellite dubbed Polaris-1 has no military application and will be used for scientific purposes only. There were no major incidents during the launch, and Alpha Squad security measures were deemed a success.”

The Canadian Space Agency has reported that the satellite is at a higher orbit than most communication satellites, and noted that "the device appears to be pointed outward to space, rather than inward to Earth".

However the Minster of Defense for Canada issued a cautionary statement in today’s parliamentary session, and said quote, “…there is evidence the satellite is equipped with weaponry of an unknown and arcane nature.”

The Canadian government has severed all diplomatic ties with Cobiness, and even accused the nation of the murder of one of their CSS agents code named: Dominion of Canada. The two nations have been at odds, since a separatist movement began in the nation in 2000, culminating into the independence of a tiny arctic peninsula at the tip of Baffin Island, now called Cobiness.

The United States maintains diplomatic relations with Cobiness, but they did vote to condemn the nation on today’s UN resolution.

The US Government has made no other official statement on the satellite launch. Pentagon officials refused comment.