Dominic Canden was born the eldest son of a Jamaican immigrant (Thomas Canden) and a French-Canadian lawyer (Marie Leblanc), in Rigaud, Quebec, (just off the shores of the Lake of Two Mountains).

His mixed racial background led to early problems in Quebec (that can sometimes have rather racist attitudes). The fact his father spoke only English and was black, while his mother was a full-blooded Quebecois and the daughter of a prominent politician for the Parti-Quebecois (a separatist party), compounded his acceptance at school and amongst his peers.

As a result, Dominic was failing school, and probably would have led an obscure and miserable life if it were not for the keen eye of Montreal Expos pitcher, Bill Lee. At a baseball camp in Oka, Quebec, Bill Lee (who attended the camp one afternoon to sign autographs for the kids), spotted the keen arm of Dominic Canden and encouraged Domi and his coaches to develop his talent.

Dominic was on the fast track to a professional baseball career since his strong and accurate arm was first spotted by Bill Lee. He attended numerous baseball camps, and even stayed at a foster home in Puerto Rico during the harsh Canadian winters, so that he could continue to play baseball in winter time. At the age of sixteen, he was signed by the Montreal Expos, a historic signing, (no other player so young had been offered a contract before).

In the early 2002, the Montreal Expos were falling on difficult financial times and Major League Baseball was considering moving the franchise. Canadian morale was low, after the devastating Rikti War, which revealed Canada’s inability to defend its own country without the aid of American super-heroes. This malaise and anger at Canada’s inability to defend itself and relying on American icons to beat back the Rikti invasion force, led to the Canadian government taking keen interest in Dominic.

They felt a strong performance from a Canadian-born pitcher for the Expos that would keep the franchise in Montreal and also help boost Canadian morale, and reduce separatist sympathies in Quebec. They convinced Dominic to take specially formulated Human-Growth-Hormone, to increase the strength of his pitching arm.

The results were spectacular.

In his rookie season at just 19 years of age, Dominic Canden won 22 games for Montreal and with Cliff Floyd, Bartolo Colon, Vladimir Guerrero and Jose Vidro, the Expos clinched the NL East title and were set to play the Anaheim Angels for the World Series. Dominic was an instant star, and was nicknamed “Dominion of Canada” or sometimes just “Dominion” and morale in Montreal and interest in the Expos surged.

The night before the 2002 World Series between the Expos and Angels, Dominic Canden was examined MLB Doctors. He was found to have additional bone structure extending from his shoulder blades, and “a strange feathery growth” emerging from his back. He was deemed to be a “super” by MLB, (baseball had previously banned all mutants and super heroes from competing in the major leagues in the interest of competitive balance).

Dominic was banned from baseball for life, for failing to register himself as a “super”.

The disgrace went further when it was further revealed that the Canadian government itself had supplied Dominic with the human growth hormone, and that the strange hormone supplied to Dominic was what had caused the strange aberration on his back.

The Expos lost the World Series and in a few years the Expos moved the Washington, DC.

The Canadian government offered a new job for Dominic Canden, as a security office for C.S.I.S. (the Canadian version of the CIA). At first his job involved low-level missions, (such as providing escorts for cabinet ministers and securing conference rooms before large government symposiums).

However, a strange thing began to happen, the strange aberration on his back continued to grow, and by 2005, Dominic had developed a set of “eagle wings” on his back (although they were still not full grown). In addition, Dominic’s arm strength continued to increase at an alarming rate. The growth hormone he had taken back in 2002 was continuing to alter and grow his body.

Given how Canada had been disgraced by a lack of super heroes to defend themselves against the Rikti invasion and given the fact Dominic had developed wings and could now lift a small Toyota over his head, the Canadian government selected Dominic Canden to enter their super hero training program.

Dominic Canden was inaugurated as “Canada’s first official super hero” on June 3, 2006. Although numerous other Canadian super heroes had existed previous to Dominic, he was the first that was officially heralded by the federal government of Canada, and the first to have his original identity revealed. He took the nickname first given to him as an Expos pitcher: “Dominion of Canada” or just “Dominion” for short.

The fact the former star-pitcher for the Expos was now an official super hero delighted the Canadian public, and overnight, “Dominion” paraphernalia was everywhere, comic books, action figures, cartoons and trading cards flooded the Canadian public with proceeds allegedly going to the Rikti War defense effort (in anticipation of the Rikti one day returning to invade).

"True North" a weapon which uses a compact gravitational field to crush the atoms within the mace until only electron repulsion keeps the mace from collapsing.
In October of 2006, Dominic’s strength was continuing to grow, so much so, that the Canadian government crafted a special “Morning Star” weapon for Dominic. It was crafted by clever use of compact strong gravitational force, which continually crushes the atoms in the weapon, until only electron repulsion keeps the mace from collapsing. This makes the weapon so incredibly dense, that it weighs several tons. The weapon was dubbed “True North” and given to Dominic on the day of a Quebec referendum on sovereignty. The public relations invent stirred national pride, and many Quebec separatists were angry over the timing of the stunt. The referendum went on to stunning defeat and Quebec remained a part of Canada.

At first, Dominic was only able to barely life the weapon, however in January of 2007 was able to finally wield “True North” as a weapon, (although not with a great deal of speed). He used the weapon on a subgroup of the Hellions gang that had outfitted themselves in Toronto, Canada. The event was suspiciously caught on film, and broadcast on the “National” that very same night, with Peter Mansbridge interviewing Dominic in front of the entire country.

During the January interview by Peter Mansbrige on CBC, Dominic dropped some shocking news. He revealed the gang he had defeated had been planted by the Canadian government. In addition, he believed the Canadian government had known the Human-Growth-Hormone given to him back in 2002 was going to produce him into a super hero.

“They used me, for political reasons. To defeat separatism and to create an instant super-hero to fight the anger that Canada had no super heroes of its own to defend against the Rikti,” Dominic revealed. “I am just a propaganda tool for Canadian federalism, heck I can’t even fly. My wings don’t work they are not strong enough to support my body weight. All the flying stunts you’ve seen me do were fake, using green-screen and a special effects studio”.

Dominic also revealed that much of the merchandising money for his toys, games and other merchandise were lining the pockets of Prime Minister Stephen Harper and many of his cabinet ministers.

The news that the Canadian government deliberately sabotaged the World Series to create a super hero and that the government was lying to their own people about Dominic’s abilities stunned the nation and overnight the country was thrown into a divisive scandal. 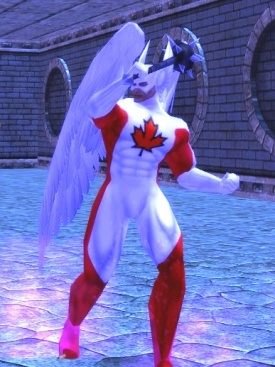 The Canadian government used ‘Dominion of Canada’ for several publicity stunts, largely designed to fan national patriotism and sell an awful lot of merchandise.
For a brief time in early 2007 Dominic was arrested by the RCMP. The government contended that many of Dominic’s accusations were false and he was accused of traitorous behavior and even of consorting and collaborating with the Arachnos organization. At this time the “True North” morning star weapon was seized and returned to Canadian authorities.

During his imprisonment, a super hero by the name of Doctor North came to Dominic’s aid and support. In addition other governments also rallied to Dominic’s cause. The Jamaican government for example, used the fact Dominic’s father was born in Kingston, to extend an offer for Dominic to become “Jamaica Man”, and move to Jamaica. On top of that, the French separatists that Dominic had helped defeat the year before, offered him a role as a super hero called “Fleurs de Lys” and would celebrate the fact his mother was a sixth generation Quebecois.

North convinced Dominic to stick to his current persona and when Dominic’s trial was thrown out of court (due to a brilliant defense orchestrated by Doctor North and his mother Marie Leblanc), Dominic left Canada to develop a life on his own terms.

Doctor North convinced Freedom Corps to take Dominion of Canada into their S.E.R.A.P.H. organization so that he could develop into a legitimate super hero. Strangely, shortly after this agreement was reached Doctor North disappeared and has not been seen again. Freedom Corps believes that two villainous agents named Loca and Chaos Red are to blame.[1]

On October 1, 2007 Dominion was badly wounded in a battle in "The Hollows" against a villain by the name of Electric Eel. Eel's electrical power actually made Dominion's heart stop before he was instantly teleported to a hospital via a device installed to monitor his vital status. [2]

The damage to his heart from the electrical shocks of Eel were severe, and many feared Dominion would not survive them. Radical surgery was required and a defibulator was now necessary to monitor and aid Dominion's weakened heart. Many advocated Dominion retire from a super-hero career because of the injury but he refused. With amazing recuperative powers, Dominion returned just seven days later, located Electric Eeel and defeated him.[3]

DEATH OF DOMINION OF CANADA

At midnight on the third day of the third month of 2009 (3/3/9), Dominion of Canada was murdered under mysterious circumstances.

Shortly after he led a protest outside the United Nations, protesting the inclusion of Cobiness into the General Assembly and demanding Canada be repatriated, Dominion of Canada was murdered.

Other details of the death are not yet available.

Lacking education beyond high school (and even that was scattered during his baseball career), Dominion has a crude sense of humor and an under-developed sense of self-esteem.

Dominion tends to spew the typical one-liner and sarcastic epithets of your average North American young man. He is eager to prove himself and will lend himself to any mission, even if the opponent is clearly beyond his abilities.

Dominion however is honest and likes to work hard. He is proud of his Jamaican heritage, and while also proud of his Quebecois heritage, he can only speak a smattering of french.

Dominion has massive strength, and can lift two metric tons above his head. This allows him to wield, the ultra-heavy "True North" morning-star mace. A weapon that can crush his opponents with devastating kinetic energy. Dominic is not yet very skilled with this weapon however.

Dominion's constitution has also manifested to super-human levels. He can resist large amount of physical pain and kinetic energy, with little to no damage to his bones or skin. The reasons for Dominion's extremely robust endurance and defensive capabilities are still unknown. 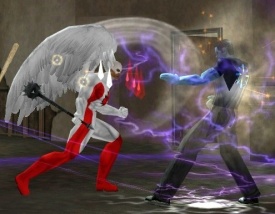 Dominion was mortally wounded in a battle against Electric Eel, requiring radical surgery to save his life.