You see me now a veteran of a thousand psychic wars
I've been living on the edge so long
Where the winds of limbo roar
And I'm young enough to look at
And far too old to see
All the scars are on the inside
I'm not sure if there's anything left of me
- Blue Oyster Cult, "Veteran of the Psychic Wars"

Dame Demolition is an extreme case of what can happen when someone puts their all into a job, gets injured, and then hung out to dry. A roboticist and AI expert whose legs and one arm were amputated by an accident on a Crey "Black Ops" project, she was denied benefits to have the limbs replaced. So, she elected to replace them on her own, and turned to high-tech breaking-and-entering to finance her research, materials, and ultimately her return to the world of the able-bodied. In her mind, she's 'collecting on a debt', and if Crey wants to brand her a criminal due to her retaliatory actions, so be it.

Lucy was at one time your quintessential geek. Extremely intelligent, yet socially a bit lost.

However, when one loses one's limbs in an accident, and then one is told that the procedures to fit replacement limbs aren't covered on one's health coverage OR Workman's Compensation policy... well, one tends to get a little angry.

Since quitting her job at Crey, she's become extremely driven, some would say obsessed. All she wants is to visit the same pain and loss on the company, as was visited on her.

The pain she's had to endure to rebuild her limbs has forged her into a cold and dispassionate killer. While a small portion of her psyche yearns for companionship, she knows she'll probably never find anyone who either understands her need for vengeance, or would see her as anything but 'disfigured'. She can't stand pity, and sexual desire based on her disfigurement (amputee fetishism a la "Boxing Helena") is worse.

She looks upon Freakshow with singular disgust, as although they are also cyborgs, their rationale (as well as their workmanship) is to her crude and unfocused. "Shade-tree mechs" is her term; they're playing with cybernetics, whereas she is an artisan and a professional. Their use of the painkiller drug "Excelsior" as a recreational high and as a means to avoid cybernetic part rejection is to her an abhorrent kludge. As such, when she's been propositioned by these anarchists, she usually responds by simply shooting them until they stop twitching, or she has her robots 'repossess' what they can of their cybernetic parts, usually by brute force, and without benefit of anaesthetic.

The Arachnos designs she looks on as refined, yet horrific, and the research she's done into the Weaver methods of integration make her blood run cold. So again, she usually does her best to reduce Arachnos cyborgs to component parts, mainly to put them out of their misery.

Crey's more 'subtle' designs, mainly with the Infiltrator and Vigilant programs, are to her more aesthetically pleasing, but again, she knows all too well what the procedures entail (and how much they cost, usually permanently indenturing the 'recipient' to Crey, to offset the 'budget outlays'.)

Lucy doesn't LIKE being part machine. She looks at this state as something thrust upon her by Fate, not something to be taken advantage of (although she's the first to admit she's 'more' than she was as a mousy and shy robotics engineer). Those that advocate cybernetics as a means to 'become better' usually get a look of utter disdain (if not outright hostility). However those that have turned to cybernetics to replace something lost, or to save their lives, she looks upon as brothers and sisters.

On an intimate level, Lucy is conflicted. She had two abortive relationships before the accident, both with co-workers that turned out to be less than satisfying, each lasting less than a couple of weeks. Post-accident, her disability has thrown a large spanner in any thoughts about a relationship (see the "pity" entry above). She craves companionship, but not for the wrong reasons... she wants someone who recognizes who she is as a person, without keying to her cyborg nature either as a fetish or as her being 'less than human'.

Lucy has always been attracted to both male and female genders; she has no issues identifying herself as 'bisexual' if asked.

Lucy was struggling to make ends meet with small theft jobs when she was approached by a tall dark-skinned woman, carrying strong Indian features. Introducing herself as "Samira", the woman said that, if Lucy was amenable, there was a criminal cartel that could use her talents. After careful deliberation (and some rather persuasive attention from Samira), Lucy joined the group, and quickly was promoted to Shogun.

However, with the Crimson Dawn's dissolution, she's now freelancing.

She has also been working with Katarina Zemanova, a 'replicant' succubus, as well as the enigmatic kunoichi Jonin Princess.

No. These are not the heroic good-goody-two-shoes girls.

Lucy is a cyborg - as a result of losing three out of four limbs in a 'work-related accident' she has built replacement limbs for herself. These limbs are integrated with her skeletal, muscular, circulatory, glandular, and nervous systems, and in addition to giving her normal mobility, also confer several benefits. Added to this is her professional skills as a robotics engineer, although her 'bots don't follow the usual 'three laws' designs or constraints.

Her primary profession is as a roboticist; put simply, Lucy builds robots. Of course, she's no longer building robots that serve drinks or disarm bombs or do anything else so self-sacrificing. Her robots are her personal army, and when each has been outfitted with a full offensive payload, they become an extremely formidable force.

All of Lucy's robots have heavy-duty leg actuators and suspensions; they are capable of multi-story leaps[1].

They are also completely incapable of stealthy approaches, on any terrain whatsoever. They sound like a herd of jackhammers low on lubricant when they're at full speed.

Lucy has fairly decent control over her bots, but is the first to admit that their AI needs work. To get around this, she's instituted a real-time telemetry system[2] that allows her to monitor, adjust, and override the onboard AI at any time. The downfall to this system is range - beyond about a hundred feet, signal attenuation and interference starts to degrade the data. However, within that range, the TRTS system will confer a slight bonus to accuracy and attack effectiveness for all robots under her command.

At extreme ranges, when the telemetry uplink degrades into complete uselessness, the robot(s) will automatically lift off and redeploy to Lucy's current location.

Along with the telemetrics system, Lucy has written a subroutine called A.S.P.[3] When her bots have been placed into A.S.P. mode, they institute a protocol wherein they attempt to heuristically anticipate any incoming attacks, and move to block them as best they can. This doesn't protect Lucy completely, but any attack that hits her will have its damage divided up at a 2:1 ratio (for three points of damage, Lucy will take two, and her bots will each take one.)

Lucy has also devised several insidious devices to augment her robotic minions, or cause distress to her foes. 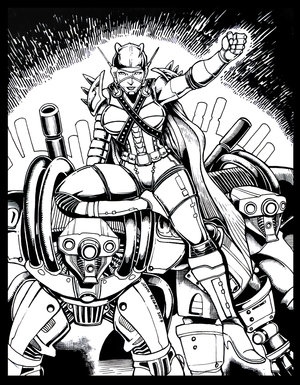 For times when Lucy is caught without her robot entourage, or to augment their already-formidable firepower, she carries a laser pulse rifle.

Lucy's prosthetic legs incorporate an anti-gravity flight system, which allows her full combat mobility in 3 dimensions. Her armored suit incorporates boot jets to add to her speed and mobility, but the main system is fully functional even when all armor and supplemental systems are removed.

She's also installed rockets and antigravity systems in her robots, although their weight and lack of control surfaces makes them a bit slow.

Lucy has had many hours to devise improvements in the software that commands her mechanical minions. Her T.A.R. software suite[8] has proven to be particularly useful, in that it can also provide real-time tactical data to her comrades as well as her troops. This allows everyone she is allied with to take advantage of any weaknesses detected by the combat targeting system in her helmet.

Scirocco has taught Lucy how to invoke a shield of sorts, a network of charged Mu lightning that shields her from some attacks. At first, it interfered with her cybernetics, but she has managed to solve that problem, although now she must deal with added energy consumption.

A variant of the armor, this cantrip allows Lucy to encase several foes within 'cages' of Mu lightning, immobilizing them.

Lucy has also learned how to cast this very powerful spell, which will trap a single foe in lightning, sapping their endurance.

Lucy is extremely skilled with computer logic systems, neural net programming, nanotech culturing and programming, mechanical engineering, CAD design, precision machining, and microelectronics. She's also had to become expert in human anatomy, as the long and painful process of fitting her own cybernetics has required her to do.

Three out of four of Lucy's limbs are mechanical. Were she to suffer an EMP attack, or her machine parts were otherwise disabled, she would be rendered helpless except for her left arm.

Lucy's background/origin, in her own words.

Up until recently Lucy has only fought in local battles in the Isles, waging guerrilla warfare against the Rikti whenever they show up in her vicinity. However, Vanguard has seen fit to supply her with ammunition and parts to fully arm her robots, in exchange for carrying out Vanguard assignments. The kicker wasn't so much going after aliens... the War Zone was home to a lot of Crey factories and research facilities, and having access to it all has her practically salivating.

The thought of being able to blow any Crey agents she finds to oblivion is, of course, a bonus.

History in the Re-Making

Lucy was accosted in the street by a simple man wearing an archaic waistcoat of brown and gold, with an odd squared-off infinity symbol as a lapel pin. Identifying himself only as "Mender Jakob", he pressed a device into her hand said a few words[12], and walked off. She's discovered the nature of the device, which she calls a "temporal garage-door-opener". She has used it to personally ensure the success of her own breakout from prison, by planting a bandoleer of web grenades and her 'spare' pulse rifle in a weapons locker, and then calmly killing enough of the guards and Longbow troops to ensure that the Arachnos attack and prison riot couldn't be easily quelled.

Lucy was offered the opportunity to speak to one of Recluse's lieutenants, and she chose Scirocco, as his sense of 'ethics' seemed to be close to her own. She's learned that having a sense of ethics can be dangerous, as already Arbiter Daos has pulled her aside and told her to watch Scirocco closely for any signs of rebellion or seditious behavior.

Lucy discovered a shadowy group calling itself the Midnight Club. As part of the initiation, she discovered, researched, and ultimately foiled a plot that would have enabled the Rikti to appropriate magickal energies for their own ends.

She then discovered the Midnighter's greatest artifact - a Crystal of Fire and Ice that was tuned to an ancient Roman city-state! She traveled there, and was soon caught up in a civil war - one that would have effects far forward to her own time, and beyond[13].

Lucy attempted to jam three EMP-warhead missiles that would have otherwise detonated within the Grandville Web, and took one pretty much point-blank. The resulting electromagnetic pulse wiped her systems and fused her cybernetics, leaving her a paraplegic. She's currently stranded in the Ouroboros Enclave, with no ability to get 'home'.

Have you heard something juicy about Lucretia de Loccia? Add it here!