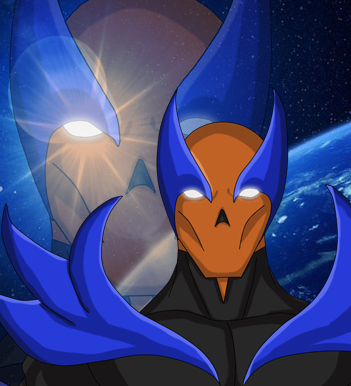 Emperor Xanatos' title comes from his short-term reign as Emperor of the Praetorian nation of Devaria. While he was a ruthless and evil emperor, establishing his iron fisted dictatorship not long after his arrival on the human planet, his nation was virtually devoid of crime. His people prospered. The economy soared. All was well. For decades he ruled as a true Emperor.

...until he learned that there was another like him: Primal Earth Xanatos.

At first Emperor Xanatos was overjoyed to hear that there was someone else like him, albeit from a parallel dimension. He did not know that Galarius had created two avatars, one for each dimension. He felt genuine excitement for the first time in years at the prospect of unifying the avatars's empires, establishing trade routes between dimensions, comparing military strategies.

This dream, however, was shattered when he encountered primal earth Xanatos face-to-face. He was no emperor, no ruler, no sovereign. He was a hero. The revelation infuriated Emperor Xanatos. This man, this "heroic" Xanatos. He had the power of the gods, yet he let the people of Primal Earth treat him like a servant. A carer. An equal.

Emperor Xanatos began many incursions into Primal Earth, against the wishes of Tyrant, to attempt to trap or kill his primal counterpart. None of them succeeded, although he did carve a path of destruction into the superhero community of Paragon City. Personally killing many members of The Defenders of Paragon. (Most notably The Phantom Visage and The Port.) Emperor Xanatos became obsessed with his primal earth double. He would sacrifice anything to bring him down. It was all he could think about.

And so it came to pass that Devaria was overrun by the Praetorian Hamidon. Without their emperor to protect them, the people of Devaria were hopeless. It took the Hamidon one week to completely devour Devaria. A place which later became known as "The Lost Empire".

His empire destroyed, and his relations with Tyrant and the Praetorians strained at best, Emperor Xanatos became a madman. Completely enraged, he blamed Xanatos, his primal counterpart, for the destruction of his nation. Revenge became Emperor Xanatos' sole motivator, and he joined a team of metavillains known as the Sadistic Seven. The seven were some of the deadliest and most influential villains of the era. The master mentalist Mindswipe and the career criminal Mr. Mud were the two driving forces of the seven, and their goal was largely to accrue as much money as they could via a series of elaborate schemes. Emperor Xanatos, however, had other goals in mind.

With the Sadistic Seven established as viable threats against the security of Paragon City, Emperor Xanatos decided to take things a step further. He wanted to assault Paragon City with nuclear weapons. The rest of the Seven realised that this was too much, even for them, to go along with. The (now) Six aligned themselves with the various heroes that opposed Emperor Xanatos (most notably The Defenders of Paragon.) and managed to stop the mad praetorian's plans before they reached fruition.

After his defeat in 2007 Emperor Xanatos became strangely silent. Some theorised he died at the hands of an overzealous hero. Some thought he had returned to Praetoria, eager to fight back against the Hamidon threat. But those true followers of the Emperor know the truth: He was watching. He was waiting.

Emperor Xanatos did ultimately return to Paragon in 2012 during "The Battle for the Multiverse". He was one of the few villains who fought on the side of Rularuu the Ravager against the combined forces of Earth's Heroes, Villains, Vigilantes, and Rogues. Many believe Emperor Xanatos was somehow responsible for the invasion. Though none, as yet, have been able to prove this theory.

He remains at large.