From the back, this young, extremely feminine lad wears the garb of royalty; A beautiful, purple gemmed gown trails at his feet, although tattered to bits. His wavy blonde locks fall around his shoulders, which you can only imagine would frame his round, perfect baby face. With a playful spin on his toes, the boy would turn, revealing a horrific reality. Dirt and black slime clump in his blonde bangs, falling messily over what remains of his face. The flesh around his eyes, upper cheeks and temples are missing completely, revealing the skull behind it. His left cheek and half of his lips are also missing, yet aside from those damages, the rest of his face looks perfect, with skin as black as midnight. The only flesh that remains of his face is his jaw, right cheek, right half of his lips and forehead. Along with pointed elven ears, his onyx black skin suggests perhaps he was not human in life.

This self-proclaimed 'Prince' flashes a skeleton grin, a decayed, dark green tongue dancing behind his teeth, showing through the hole in his cheek like a sick talent show. Once lively eyes have shriveled out long ago, replaced with only a faint purple glow. A light purple collar is tightly enclosed around his neck, lacking clasps or welding. Above that mysterious collar is a stitched up gash on the left side of his neck.


The front of his royal gown has been sliced down the middle, evidenced by the jagged cut along the center of his chest. His sides, however, are nothing but ribs, most internal organs removed. An old, thick black belt hangs off his right shoulder, across his chest to the left side of his body, securing his unbeating, black heart in place. Ugly stitches reconnect the boy's right arm at the elbow, while the bones of his wrist, phalanges of his index and pinky finger are displayed for the audience. Below the elbow of his left arm is almost completely bone, with only a few inches of flesh around his wrist like a gore bracelet. His left leg seems to be the least damaged of all, stitched back together at the thigh and ankle. The bones of his right knee is presented and patches of flesh have been stitched back on.


However, these damages can't keep him from skipping and dancing!

Childish, cocky, pitiful and sociopathic are only few words that can describe this undead boy.


With venom for blood, it's no surprise his words are just as sinister. Klaus is unphased by the pain he envokes on others, even considering it a game as he picks on the innocent and injures his 'friends'. Even taking advantage of others when the opportunity rises. Being raised in the violent city of the Underdark, his actions are methods of having fun, and are normal in his mind. As to be expected from a pitiful child, his bark is bigger than his bite, and he cannot hold his own when threatened or taunted. He depends greatly on those around him, but when the time comes, they may not be there for him.
After all, the world would be better off without him. 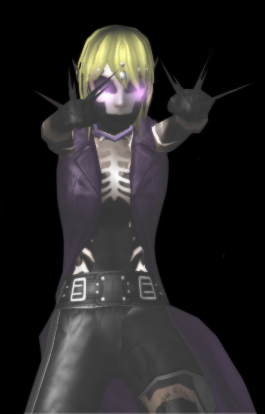