Kichi began training when she was old enough to walk. Begining with a simple sword carved out of wood, to training with an actual katana when she was ten, then moving on to martial arts at age fourteen. And once her fire powers settled into her body at age sixteen, she began the training all over again. But with the weapons on fire.Her father and grandfather, and the fathers before them, were all warriors.

Kichi father, Isao, swore that once he had his own children, he would turn them into the world's biggest weapons. Starting off with Kichi's older brother, Muto. Who is all about force. Because Muto was male, Isao had great hopes that his wife would bare more males. That it was fate. However, once his wife had two girls, he was crushed. But decided to keep the training going. Then the twins were born. A male and female. It gave him more hope, and the twins are still training to this day to be as good of fighters as their older siblings.The family began to make their own business. But we'll get into that soon enough. For unknown reasons, they had all seperated. But their warrior blood could not be denyed. Each set off in search of one's self.. and also, to learn more fighting techniques.

To keep up with all the new fighting styles in the world, Kichi began to keep a journal of all the things she saw as she traveled the world. Martial arts, sword-play, wrestling (even sumo wrestling), boxing and many more. She wrote down which degree the body should turn for a certain attack, to drawings of the movements.

For many years Kichi's style in fighting has changed due to this. People were gaining super human powers left and right and that's hard to keep up with if you're built to be a fighter. 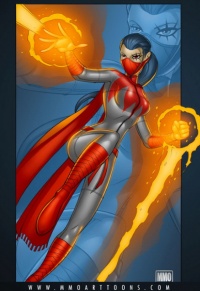 Not only was the warrior gene passed down by

Kichi's father side of the family, but a mutation was as well. Of fire. But to them, its much more than a mutation. To them, it's just natural. They cherish it. Heck, some of them worship it at times. Fire is everything to them. Their love, their hope, their dreams, their life. And if such a thing is taken away.. well. They try not to think on that bit.

If a target Kichi knows would be too much to take on if she were to be close, she'd simply stay as far as possible away and slowly steal his/her heat and energy away, then throwing it back in bigger bursts of fire. Once seeing it's clear enough to move closer, she does so, stealing more energy from the person and sending out enough to quickly heal the wounds of the allies around her and herself as well. Kichi can also toss energy to her allies, speeding them up quickly. But tries not to mention it. Because people get addicted. Its like crack. True story. (lol kinetics/SB)

Kichi not only obsesses over many combat styles, techniques and trainings. But more with just how a body can move. Pushing it to it's limits. She trains hard, keeping fit, eating healthy. With that, she trains in techniques and styles such as:

Isao had always been a rebel. He wasn't able to help it. An anger problem, and a hatred for most things. It's said he acts in a way because his mother and older sister were murdered in front of him at age seven. His father had shown up too late to stop the murderers from killing them, but had saved Isao just in time. Isao had vowed to work to become a samurai like his father, but better. He would never allow anyone to lay a hand on his family.

Maylin was brought up proper and came from a wealthy family. She would wear the finest of clothing, and some of the most beautiful jewelry in China. Women were jealous of her and men lusted after her. Despite this, she always kept a good heart and mind. She always seeked knowledge and wished to be a teacher. But she was arranged to be married to help with the family's business. She also studied in many magics, unknown to her family. She had learned it from the maid, who grew up in a family who used it. One day, the stress took Maylin over. She spoke with the maid and traded some of her finest clothes for less-impressive clothing and received a magical item, and went off. She wandered streets and ran into Isao. Who was there on business with his father. They instantly clicked and spent many hours together each day, until at night she snuck back into her home unnoticed. Well, she thought it was. A friend of her father's found out and she was to be inside the house at all times. They did not want her to fall in love with a Japanese man. It didn't keep either of them apart and eventually, they had run away together to Japan and were married. She had left everything behind, but that one magical item given to her.

Isao and Maylin built a home in Shikoku and soon enough, Maylin had given birth to a boy. Muto. Isao was more than excited to have a son. He was ready to begin training right away. Then Maylin was pregnant again.

May 16th, 1887 their first daughter, Kioko, was born. Isao wasn't sure what to make of the new daughter, being a man's man and all. He wished to name her Kichi, but Maylin liked Kioko better. They discussed it until they decided to name her both. However, she was more called Kioko than Kichi. But her father only adressed her as Kichi.Two years later, Meia was born. Then the twins, Senichi and Sakiko. Maylin and Isao were overwelmed with the children and had Isao's father move in with them to help.

Years passed and the lovely fairytale of the forbidden romance began to fade. More and more, Isao grew bitter and angerier. He'd yell at the children, at his father, at Maylin. He began to gamble away all their money and get into many fights. Maylin confronted him on it. And reality of the ending of their fairytale love struck, as he killed her in their arguement. The grandfather had been away, and yet again missed something he could have stopped. For that one moment, Maylin grew a great hatred for Isao. She had cursed him and his family with her last breath. Muto who was now 24, Kioko 19, Meia 17, and the twins 8 years old were watching the entire time. 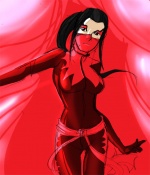 (Coming soon. And all the rest is coming soon too. Friends, etc etc. I'm slow, whatever. HUSH. :()