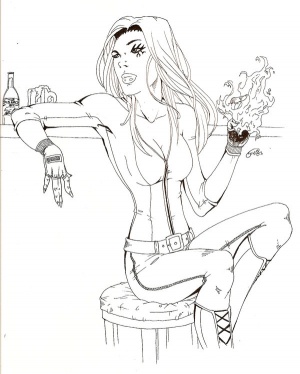 Starting off young, Meia was always the sassy and rebellious child, not afraid to take some risks. As she grew older and eventually headed to the Isles, she learned to hide her emotional side in her actions. While some believe she simply doesn't care about the world around her, in reality she masks her feelings in order to save herself. In Japan, Meia was looked down upon due to her unacceptable lifestyle, but is now known for her radiant beauty.

On February 23, 1889 Isao and Maylin witnessed the birth of their third child, a particularly difficult baby girl named Mikayo, now known as Meia. The daughter remained dissident through her childhood, and frequently argued with her older sister, Kioko or Kichi while respecting their brother Muto. Despite their fighting, the sisters became inseparable as Kichi felt obliged to keep an eye on Meia. A particularly notable incident involving a certain fishing trip drew the sisters even closer. After the twins, Sakiko and Senichi, were born, Meia became close to her new sister, Sakiko as well as her grandfather who moved in with them. As Meia trained to better control her fire powers, she became more rebellious and uncontrollable, except to her grandfather and Muto.

Unfortunately the seemingly pleasant life style Meia once lead had to fall apart as Isao became hateful. He spent days away from their home, neglecting his family, gambling and drinking. When he was home Isao yelled constantly and abused his children. Maylin finally became fed up with Isao's intolerant ways and got into a horrible argument with him. The fight ended in Maylin's death, but she managed to mutter a curse in her last words, changing the family's life forever. Isao, his father, and his children became completely immortal, unable to die or age as the years passed by. 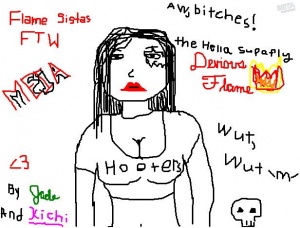 (( I thank Kichi and the Skype sketch pad for this amazing drawing. ))

Kichi- Having lived with Kichi all her life, Meia has become close to and sometimes even trusts her sister, while still constantly fighting with her. Kichi disapproves of Meia's reckless lifestyle, leading to endless arguments.

Lightsurge- Elle and Meia have become very close friends with similar interests: sex and alcohol. The only dilemma has been Elle's tendency to hit on Meia, despite Meia's many refusals to date Elle.

Chill Yeti- Although Meia did indeed sleep with Blake, as everyone knows due to Blake's abnormally large mouth, she deeply regrets this drunken mistake and now absolutely despises Blake.

Mick Hawkeye- Meia dated Mick for a short time but became very close to him. Although they don't talk much anymore, Meia still considers Mick a friend.

Trevor Pillman- Meia became very close to Trevor quite a while ago but now he dislikes her due to her tendency to hit on him in front of his girlfriends, namely Mel.

Sungazer- Meia hardly knows Sun, although he proposed to Kichi so she's not sure how to feel about him.

Ghost Scream- While for a while Meia and Fallon were fine with each other, to the point of almost being friends, Meia ruined that by hitting on Fallon's husband. Fallon now wants to kill Meia.

Graffiti Samurai- Meia met Graff and five minutes later was engaged to him. If it hadn't been for the fact that Meia slept with Blake and Graff disapproved, they may have gone through with it. 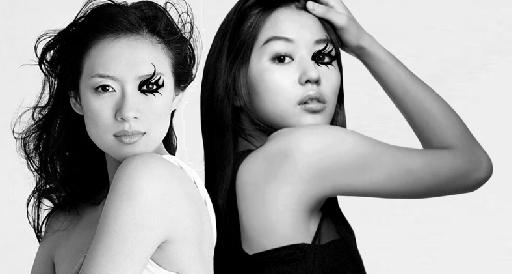