Jump to: navigation, search
Who Am I?
VirtueVerse Tools
Ask A Question
Complete Pages
Works in Progress
Other Characters
My Groups
Answered Questions Holy crap they put me in charge?

I was approached by Kadekawa & the Admin early in 2010 about VirtueVerse's need for a new home. After a bit of discussion and some nefarious plotting we set about the task of getting VirtueVerse and UnionVerse moved to my server. So now, I find myself in the role of VirtueVerse site co-owner and administrator.

I've tried to be productive with my new role and provide new tools and goodies for everyone to use. I also employ an open door policy so I'm always open to hear your requests or ideas, and to help out where I can. I hope everyone is enjoying the site, the changes, and the various updates that have been made. With that said however, it can take me some time to reply at times, so please have patience if you're request isn't immediately responded too!

ColorBox - A template to allow users to easily add a colored box around their page content.
HS - A utility template created to support the ColorBox template. HS allows you to easily style text without knowing CSS, primarily for headers. 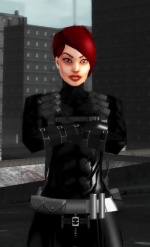 Cherry is often describe as brash, assertive and too smart for her own good. A demolitions expert who earned her stripes with the Air Force as a combat engineer for RED HORSE and her wings as the first female member of the airborne RED HORSE squadron. Cherry has lived through the Rikti wars and is one of the surviving members of her squad from the first war. 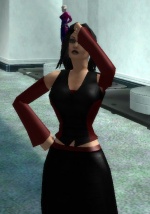 An almost villain on the path of redemption, the anti-hero, and vigilante. Ava is dark, moody, and overall jaded. She is also highly intelligent, and logical to a fault. Her life hasn't been easy, and its made her the person she is today. From surviving the first Rikti war and the loss of everything dear to her, to finding out her mother was an evil mad woman and finding love and happiness. 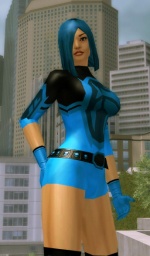 Everyone's favorite laser sword wielding, socialist hawt chick that kicks ass in booty shorts when she's not modeling. Actually no favorite is wrong, people really dislike her. But that's what happens when you're genetically engineered to be better then your ineffective and wasteful ancestor species. After all its not Azure's fault sapiens don't like to hear the truth. 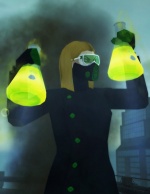 As a lab assistant Angela Marks had a fairly benign existence prior to her run in with a group of radical animal rights activists. Unfortunately for the activists the room they placed the annoyed lab assistant into was a test chamber permeated with chemical 2-4-5 Trioxin. Fortunately for Angela the chemical had an unexpected effect on human subjects, death followed by unlife. Brillant, if socially unadjusted she held large promise in the field of chemical research until her untimely demise. She's now applied herself in unlife to sustaining her own condition and various types of mad and demented forms of scientific research and mercenary actions to support her research. Including joining recently with Phanto and The Blacklist, though her motives are currently unknown. 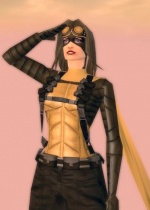 A veteran of World War I and World War II flung into the future while attempting to stop Nemesis, Kinetic finds herself in a strange world, constantly at odds with the changes and a past she can't seem to regain. She's the sole remaining survivor of the WW1 & WW2 super team the Daring Aces.

Evil will never die, it only gets stronger. The desire to control the world is not one of a just man. Phanto spreads chaos, while Exadeus preaches salvation. The Grand-Duke demands dominion, while Mr. Shade pursues extinction. All these men battle for control, for fear, for pleasure, but Havok seeks to fight and protect.

An LLC formed by Ava and registered in the Etoile Islands (Rogue Isles). Archon X provides genomic and genetic related services to both companies and individuals. Ava is currently the sole official member of the company.

An extra-governmental intelligence and security organization formed to meet the rising storm of exceptional threats beyond the usual scope of normal law enforcement and military forces. SCORPIO is dedicated to protecting the nations and peoples of Earth from terrorists and all technologically-advanced, extraterrestrial, psionic, superhuman, occult, paranormal and supernatural menaces, and often assists in apprehending threats to national security and world peace.