For as long as anyone knows, or has been told, Madame Dirge, originally known on the streets as Jackie Shiv, has been an orphan. Originally living on the streets of Mercy as one of its homeless dregs she did almost anything to get herself the money needed to survive in a harsh place of the Rogue Islands. According to what little information there is on her life at this point, she was eventually able to get a hold of a tome of magic that had been left behind by a sect from the Circle of Thorns that detailed information concerning an art of magic called Necromancy, which would explain Dirge's powers in the present day. Information that is recorded how ever, documents that Dirge in her early days as what could only be described as being a Super Villain were spent doing small time smuggling jobs and bank robberies in the company of zombies and other forms of undead creatures that were obviously under her power. It didn't take her long how ever to start moving up in the criminal world thanks to her magic as she eventually became a smuggler with minor ties to the Marcone Family which she used as a way to get goods she could ship out and in from the Rogue Islands to make herself money.

Eventually how ever, the Marcone Family began to think she was becoming too confident and dangerous in her abilities and sought to wipe her out. This attempt how ever, was short lived as the people they sent after Dirge were never heard from again, mysteriously vanishing, while Dirge merely continued her smuggling operation, at this point having the contacts necessary that she severed her ties with the Marcone Family and went independent. Soon making a reputation for herself in the underworld as an accomplished smuggler and dangerous magician. Some of her most recent exploits of note being the work she did in undermining the most recent plans of Port Oaks very own Mr. Bocor. An act that ultimately got her a sizable sum of money and established her place of dominance over the powerful voodoo mystic. It had also been rumored in the past that Dirge had also in the past been appointed a member of the Midnight Squad, though there is little evidence to confirm this rumor, let alone solid theories as to why she'd get involved with such a group at all.

Madame Dirge is a very cold individual who would no sooner shoot someone in the head than say hello to them. Normally she won't bother speaking to someone unless they either speak to her first, or she believes they'd be useful to her in some way. On the occasions when she actually chooses to be social though, she could prove very pleasant at times... She even can make for a good drinking partner when the mood takes her. 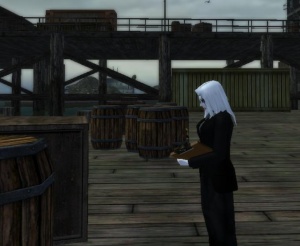 Though Dirge knows a great deal of different people, there are few that she personally regards as being worth mentioning... Yet.

This section is reserved for anyone to leave opinions, comments, reactions, or rumors about Madame Dirge.