Moxie is pragmatic, cheery and not completely trustworthy when dealing with business; But a loyal friend and modestly apt tinker.

Typical of her race she has propensity for causing explosions and supernatural ability to survive them. She is a blacksmith and tool& dye engineer specializing steam , and arcane operated gadgets and tech. But not above appropriating parts faling off of a truck or using unsafe discards.As a member of the horde she has honed her usual skills of knife fighting and traps, to add use of shield and larger arms. And of course few Goblins survive to adulthood without learning the handling of lammables and explosives.

Goblins are hardy and agile. Their quick reflexes give them excellent skills in operationg machinery and aircraft, not just the maintaining of.

Varied warbots to protect her person and a mecha armor suit she had arrived in, but has since been upgraded!

Moxy was goblin born in the region of Desolace on the continent of Kalimdor on her homeworld which had been arrogantly named by a younger race as Azeroth. A world with many wondrous technologies in magic and industry, it was not advanced in the digital-electronic discoveries. Steeped in high ley line strength it's strongest force was magic. No known "super" powers except Magic based. Primarily: Animism (based in in singular nature elementalism or ancestors) and its broader practice: Totemism (the world at large and ley lines), Arcane (ley lines, Demon summoning, Necromancy, Alchemy) and Divine (given from a powerful deity/entity). Science and technology are at the stage of infant industrial level. Hers was a native race and like several native races, enhanced by an arcane environmental influence. It was also one of the few native races that was not anthropomorphic versions of native beasts or magically constructed. Not quite as populous as the faster breeding Titan exported race, the Vykrul (especially it's descended deevolution mutation; Humans) nor the more recent the non-native extraplanetary races like orcs. Goblins were raised above a more brutish origin by way of a spectacular native mineral, Kajamite. But it's method of raising their intelligence left gaps that had ...."creative" fill-ins. Their evolutionary branch partner, the hobgoblin, were not as lucky to be enhanced, but made up in brute size and strength. Goblin society was created around the bartering of Kajamite which developed into a opportunistic, mercenary form of capitalism. Goblin Society revolved around profitable ventures and invention of viable technologies. Their social system was based on profiteering to the point the leaders were Merchant Princes that gained top position by using all means to be the top business model/family model called a "Cartel" and top player within it. It also made them quite metropolitan by way of accepting as a "race" anything they could barter, swindle or deal with no matter the mode of speech or form. They often have in servitude the fallen tribes of the world's former Apex race, the Trolls. Unsuccessful Goblins (or their children) ended up as mercenaries in many cases, since their main society was neutral, rarely making alliances. The one Prince that dared to do so cost the nation at whole and was ousted by way of assassination in no time. Cartels are semi-autonomous and could make alliances with certain factions or races if they wished. Their industrialist unions often sold weapons of war and destruction to either party of a conflict, sometimes both; which gathered their race a reputation for being traitors or untrustworthy. Especially when an outsider witnessed politics that subterfuge, assassination and cronieism were all consider methods for advancement, in addition to being the answer man of their cartel. It is true Goblins are opportunistic, they don't believe in saving some mook from their own stupidity. But contracts for quality arms were also followed and provisioned faithfully. Goblins especially excel in demolition because of their disturbing racial proclivity of being pyromaniacs.... Everything is better if faster, especially with a rocket strapped to it. Goblins are very loyal to their inner circle but for all others? anything goes. All is fair in Love , War & Business and a sucker is born every second. Time IS money! They rarely have evil intent but can do irresponsible thing son such large scale, they are often viewed evil. Whether trading beasts of burden in far reaches of frontier or selling snake oil in the bigger cities.(___this space watch) They are new in use of Arcane powers and it will be interesting indeed. This brings is to Moxy:

Not much to tell of. very typical of goblin society. Mother was a tinker of great proficiency. her father was a wanna be profiteer. He was never very good so ended up being a trading post profiteer on the caravan trail between, the Cenarian Wildlands and Nigel's Point. One day a goblin and a couple of orcs from the Horde recruited her with their talk of other places and money to be made. The Horde is a coalition of non alliance races that banded together with the remnant of the original Orc Horde for the protection of numbers against the larger and unpredictable human population.

Brief: the Orc Horde of Gul'dan was mighty force of orc warriors infused with fel magic (demonic plane magic) and recruited by an evil multidimensional, interplanetary invasion force called the Burning Legion. Orcs were considered perfect canon fodder once they were corrupted away from their societies nomadic animist society of ancestor worshipers and elemental shamans. A brutal homeworld with all manner of ferocious beasts of tremendous size, even predator plants made then fierce and intimidating minions. This action ultimately led to tragic result of their entire planet being destroyed by magical forces in a battle to close the dimensional gate that the Legion had opened into Azeroth. The fragmented remains even now float in a netherspace area between planes connecting Azeroth and doomed Draenor and are stage for some remaining battles.

Daily Grind and the Portal blues

Moxy’s career in the horde was a living. She was early on put in a special ops team as their demolition expert and armorer. It was a day to day grind with some adventurous events for counterpoint. |And so her life simply rode that track in mind-numbing stagnation until the doomed mission. 2 Primal earth years earlier, her team was on a mission to scout opportunity and possibly task out the assassination of a high profile political figure of the opposing faction. Their travel was using a dubious method created by a mad gnomish warlock who claimed to be a wizard greater than Medivh. The trip behind the lines of hostile territory was without any major incident though they mixed some..which for Moxy, meant she got her tauren companion's height and hooves and coloration. Disconcerting but the mission was til doable since they wore glamouries for disguises anyway. BUT the trip home...

The warlock had too much dwarven stout at the pub local and let information slip (as well as was not at his optimal for casting). AS events unfolded while he was trying to reopen the portal after they contacted him by gnomecorder to request extraction; enemy agents that had been spying in the tavern came and destroyed the gate just as they were stepping through!

When the portal snapped in both ends it looked like the end... a terrible end drifting in the nether until faded away! But there was a tingling... |unbeknownst to the party, in another dimension 4 layers away, a huge science and magic based portal was being destroyed by warring factions at the very moment it had been spun up in charge for use. The backlash cause a vacuum to suck the party into that world... 7 of the party of 13 were dumped together in the street of Praetorian Neutropolis. The Weaker magic of that world left their party greatly at disadvantage. They were subdued and captured quicker than they would like to admit. The PPD and then mysterious Elite Security Agents and Anomaly Researcher Burtrow from the C-corp had them under intense study and quarantine for nearly a year. They were release on recognizance to become citizens thru services. They were also given devices to track if they tried to gather, for the probation dictated they not contact each other until full citizenship was earned. Last that she could glean from sources the ones taking this world hardest was the Blood elves, Taurens and Trolls. Probably because the ancestor and earth bond they were cut from as well as the less natural world and politics.. The Sin'dorei was affected by the lack of heavy arcane and mana availability. The politics were in their element and traveling dimensionality and planar pathing was not new to them. Not even the concept of space travel. She would find them eventually but was not overly concerned. The Warchief actually fought to the point of being killed in his attacks were not magic based and he was making up for the party's sudden weakness. 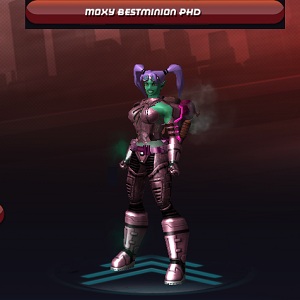 Life in Praetoria and Departure

Moxy's family did not carry the name Bestminion through a couple generation for nothing. Praetorian hierarchy was quite useable for Moxy. Capitalism they called it. The recent 9 months she lived free in Praetoria were mostly under tutelage but it was great working for the top dog in the food chain. But them she realized there was no upward mobility and what mooks there were had been fleeced dry by the big guy long ago. Her shady deals with Resistance member put her in a pickle one week. And left her with a pivotal choice, would she step (>shudder<) though yet another portal to another world still or stay and try to explain her way back in to grace. She knew that favorite to second best friend, the tauren girl Lishka had evidently gone resistance during a prisoner raid & smuggled over out of captivity and never even had to work for praetorian regime or even Resistance. Her other closer friend, a mellow Sin'dorei of the Light touched Sunwell, Ari also was defection that very same week. despite having advanced in rank pretty high up . Mox really wants to know what offer could get a political animal that loved clean cities like Ari leave the comforts for another unknown. So all her only connections to her former life and personal friends were gone through the rabbit hole. It wasn't like she was attached to this place. Add that with the Cole character in charge there was not a lot of room for upward mobility in his design of hierarchy.. She searches to unite with her lost scout squad members, primarily her gurlz; Aristomache Sunrune Ari, Corpus Christie Cris, & Ptegleska Softcoat Leshka.