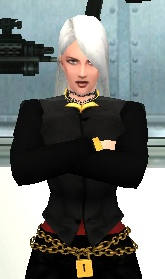 Nehvan is a no-nonsense, devil-my-care, itchy trigger finger, sarcastic, tell-it-like-it-is type of gal. She may come off as a b*tch sometimes, but in actuality she’s a good person with her heart in the right place – she’s definitely far from perfect though and she knows it. If you need someone in your corner she’s the gal to ask or hire rather.

She doesn’t know how she got to Paragon, much less the “why” though she does recall seeing some CoT before passing out again, most likely after wrecking the place considering it was a mess when she woke next. Since that day she’s been trying to make lemonade out of the lemons life has handed to her. One thing she finds particularly odd is the fact that there are a LOT more demons that are “Good” which rubs her a bit the wrong way. Certainly doesn’t mean she trusts them. She’s never been fond of cultists or Demons, namely because of her father and his line of work, but that doesn’t mean she’s not willing to be proven wrong – it will just take a great deal of convincing. Nehvan is incredibly attractive and has a rather otherworldly appearance rivaled by that of the Fae. She doesn’t look a day over 26.

In the Beginning, There was Nehvan 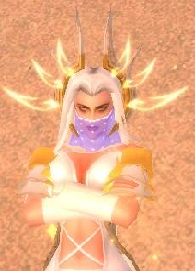 The Goddess Sirus
Nehvan grew up on an Earth very similar to the one people refer to as "Primal Earth". Only real difference is that the Demons run rampant without any real "Checks & Balances". Her father, considered a "Fallen Angel", pretended to be human and became a Demon Hunter as though a form of repentance for some sin he felt he had committed. Sirus, an ancient primordial Goddess, was trying to regain a foothold on that planet, but it was difficult seeing as how the people seemed to feel that the Gods had abandoned them. Upon seeing the Fallen Angel and what he was trying accomplish she felt a pull that simply could not be ignored. She took on a mortal guise and approached the Fallen Angel. Of course - he knew already what she was but it didn't matter. He was just as intensely enthralled if not in-love with her as she was with him. Thus was the beginning of a deeply heated romance that produced a child named Nehvan. Sirus raised her daughter till she was old enough to be weaned off of her and handed the responsibilities of raising Nehvan to her father. Sirus desired to stay but would have to finish raising her daughter from afar as her duties as a Goddess came first. Nehvan’s father knew that and with a heavy heart raised his daughter with all the love they had shared together.

At 16 while out on a team mission with her father, Nehvan was nearly caught in a trap laid by a target they had been following. Her father managed to rescue her but in the process, it is believed he lost his life. Nehvan did not see him again after. Since then she has dedicated her life to the same line of work her father did hunting demons, recovering relics, going after cults that are harmful – the usual. All in a days work.

Nehvan's physiology is much different from most humans. It shows up normal on most scanners and that's a subconscious self-defense mechanism since the woman assumes she IS normal physically for the large part, just like everyone else. Her skin is soft and smooth like silk but in reality it is tough as NAILS to pierce or cut. She has two hearts and four sets of lungs. The extra organs really come in handy when something vital is pierced, which allows the body to reject what has damaged it and repair itself. Her bone structure is also much denser, but it won't be noticeable due to her defense mechanism which makes her feel rather light. In general however, it's just difficult to kill her based on her heritage alone but also NOT impossible. 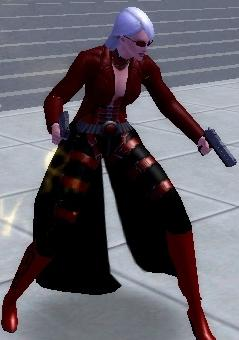 Nehvan has affectionately named her custom, engraved D-eagles, Trust and Faith. Each one is inscribed with a different quote, "No rest for the wicked" and "A star unto the night". She often refers to them as "The Girls". What? You thought she meant her boobs? Get your MINDS out of the GUTTER! Her sword that not many see her often use unless absolutely necessary is "Hope". All of Nehvan's weapons give off some kind of supernatural aura. The majority of the time her guns are either holstered to her lower back at the belt line, beneath the trench coat or to the thighs. When out in the field her sword is holstered to her back - or she pulls it out of her own personal hammer space. Most of her jewelry gives off magical, supernatural, or divine auras as well.

Nehvan has had a run in and brief history with the God of War, Ares. It is believed that there is a distinct possibility she may very well be the Incarnate of War, but she is of a much more Lawful, decisive, kindly, Warlord disposition. It is also said the Goddess Athena has shown great interest in the woman and more often than not offers her guidance and protection to her. 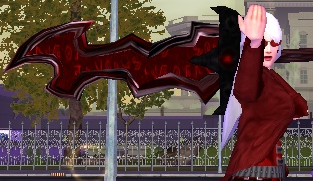 In Her Own Words

“You know – I really don’t care to do this interview right now. I got better things to do, people to save, artifacts to recover, cults to break up, demons to hand their O-rings to – you know how it is. So if you don’t mind. My trigger finger is itchin' for a fight and I’ve got work to do. Thanks.”