The Croshaw Project was an undertaking by Crey Industries which had the goal of providing advanced medical care to Paragon City's noble protectors. The well-meaning heroes who would benefit from the project took Croshaw's life-saving care for granted - unaware, of course, of how such aid was made possible.


Red 12-13 was one of the cloned meta-humans comprising batch 0916. Hardly unique amongst her genetically-engineered brethren, she too would have served as a superhuman organ bank when some unknown "good guy" needed her body.


However, late in their development, something caused the members of batch 0916 to mutate, leaving them incompatible with other meta-humans. Dubbed "the Barren", they were to be destroyed immediately - however, a fortuitously-timed attack on the project's headquarters left Red and her kin free to roam the streets until they found purpose.


For Red, that purpose was hatred - of those who created her, and the naive heroes who let it happen.

Red Barren - "Red" to the rare people she doesn't hate - is a Super Strength/Invulnerability Brute played by Fox Lee. She was Fox's first CoX character ever, and possibly the one she's most attached to[1]. Red was actually SS/Stone in her first build, way back during Fox's Valentines Day trial of the game. She was also a Natural origin[2]. She was rebuilt when Fox got a proper account, resulting in a far more appropriate build, a proper background, and a minimized 'Hips' slider. She was later transferred to Virtue, along with Refrain, in preparation for i11.

Red is a classic rebel, with the furious drive for freedom that comes from being born into effective slavery. She's extremely hateful and angry, but it's kind of fair enough - all she wants is to be left alone, but no matter where she goes, people insist on trying to control her. She's very bitter about the concept of "heroes", of course, and considers those who work "blue-side" to be naive and short-sighted in their idealism. She's mostly defensive in her interactions with them, however - if her nature could be reduced to one word, it would be "territorial". She operates on the simple tenet that as long as you stay the hell away from what's hers and don't try to tell her what to do, she won't start any shit with you.

Red is as simple in her methods as she is in her motivations; she is a blunt trauma weapon fuelled by a deep-seated rage, and has no patience for finesse or subtlety[3]. As such, Red avoids most contacts in favour doing newspaper jobs, though she's usually willing to throw in with other Riot Gear members when they take on more important missions. She's definitely anti-Arachnos as much as she is anti-Freedom Phalanx - they're all a bunch of trumped-up fascist jackasses, as far as she's concerned. One day when she's got the clearance, she's determined to go after both Statesman and Recluse.

Also, Red has virtually no sense of humour, as most people learn soon after meeting her. She's developing a bit of one, the more time she spends with Riot Gear, but generally she doesn't tolerate other people attempting to get clever with her. She's particularly short-tempered with people who talk too much, or in circles, or use humour to postpone "getting to the point".

Red's history is short and brutal - much like her whole life - and mostly covered by her biography above. Created as an organ bank - possibly cloned from some other hero or villain - Red mutated and was to be destroyed before a surprise attack gave her and her fellows a chance to escape. After a spat of aimless wandering and rage-fuelled violence landed her in the Zig, she took advantage of another assault - this time by Arachnos - to make her own escape. Red spent some time alone before a chance meeting with D-38, which eventually led to the founding of Riot Gear - a mutually beneficial business agreement where he provided thinking and she provided violence. Well... more violence.

Red is a founding member of mercenary group Riot Gear. In fact, for lack of proper home, Red in fact lives in the warehouse that serves as Riot Gear's base. Not that she would want to live elsewhere - Red's personal space extends to several miles from her own body (which is large enough to start with).

Red's only real affiliations are within the group, primarily with its "grand accountant" D-38 - whom she warily views in a sort of "little brother" fashion, complete with wanting to beat his head in on occasion. She also frequently associates with Vinnie Ogg, the Gear's resident cat burglar and jewel collector, though this relationship is almost entirely mercenary and again, somewhat wary. It's quite possible that she enjoys keeping him on his toes.

Red actually seems to have had a degree of affection for two of the Gear's former members - an operative named Ben Briggs (and his small mercenary band), who viewed Red much like a big brother/sister figure, and the Lion of Minos, an barely-human anthropomorph who found himself a tolerated presence in Red's storeroom/junkyard due to his animalistic nature. Neither are currently present in her life, however.

In terms of sexuality, Red is probably a lesbian if she's anything at all. She generally comes across to her teammates as asexual and sexless - let it never be said that Red is womanly - but it's very little-known fact that she did once have a crush on a young hero girl she found it necessary to team with in Pocket D (not a metaphor). It's possible she now has eyes for Riot Gear's resident geek girl, Kit-Bash, given how quiet she was when she first saw the girl in a suit. Kit should probably hope that this is not so.

In the more recent parts of her career, Red fell in with Vanguard after being recruited by Borea, a similarly anti-nonsense woman. Through her work for Borea, she soon - somewhat accidentally - she became a fully-fledged member. This might seem odd, given Vanguard's somewhat heroic position in the world, but Red considers them apart from other "hero" groups because of their realistic outlook and common sense, and identifies with what she calls their "Stay Off Muh Lawn" mentality. The fact that they give her an entire warzone to run around in, and encourage her to beat the crap out of anything that gets in her way, can only help.

She is, however, eternally frustrated with a certain Vanguard Operative named "Carl", a serial PoW whom she has had to rescue more times than she can count. 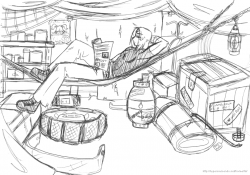 Red has the usual complement of powers for her archetypes - she's prodigiously strong and unreasonably tough, hard to control or contain, and prone to fits of violent rage. She also has extraordinary pain tolerance, even for a brutish thug like herself - it's not that she doesn't feel it, but she has a tremendously high pain threshold, and is able to use the pain she does feel to fuel her rage and her strength.

Also, as a giant metahuman organ bank, she has at least three or four of most important items. This has some interesting repercussions relating to metabolism and such - mostly it makes her very resistant to disease and poisons, generates a tremendous amount of energy, and makes her very sensitive to most sensations (hearing, scent, etc.). Possibly Red's stubborn bloody-mindedness could be considered as an asset, but she has little in the way of talents that don't relate to either causing or enduring serious physical harm.

Red's simplicity, short temper, rage issues and relative lack of intellect have already been covered. Her other major shortcoming is her heightened senses; while these can be an advantage in some situations, they are often a hindrance also. Specifically, touch is included amongst them, meaning that when Red is in pain, she's in an tremendous amount of pain.

Red's eyes seem to be the exception to her broadly powerful senses. Possibly as a result of the mutation, Red's sight is murky and poor; she isn't blind, but she's at a disadvantage if her sight is the only sense she can rely on. Say rather, her eye - Red's right eye is completely absent, after she lost it in an early fight in the Zig. Her body rejected any replacements (see below), and whilst it can recover from almost any injury, it can't recreate entire organs on its own.

Also, Like many other creatures with genetically-enhanced metabolic rates, Red needs to consume a huge amount of food to fuel herself, even more than her huge body would normally suggest.

Red was originally made so her organs would be compatible with as many various meta-humans as possible; developing a universally compatible body was the whole point of the Croshaw Project. However, this has been essentially reversed by Red's mutation - in fact, her organs have become bizarrely hostile to other bodies. Her cells - even those which aren't normally responsible for immune system functions - seem to violently attack any foreign introductions, making it extremely difficult for her to receive advanced medical care or to aid others in such a fashion. She's secretly rather proud of them.