Colin Hutchence (Solis) was Cyphre's (global handle: @Cyphre) first character in the Virtue Universe/Server, designed as an experiment to test out a fire blaster. Long story short, he ended-up being a lot of fun to play, and escaped deletion doom. Colin never had much direction in RP, being played as a non-main solo character with a less than fully fleshed-out background, until he joined the PPDMHD, becoming it's leader. 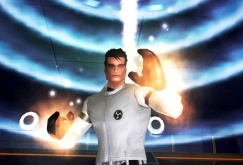 Colin has been associated with four organizations in his relatively short life... he was a Lead Scorcher in The Outcasts in his youth. After reforming himself, he joined the Paragon Police Department and worked as an undercover officer and later as a squad leader in the PPDMHD (Paragon Police Department Meta-Human Division), where he flourished until that division was closed. He then lead StormForce alongside field leader The Hornet. 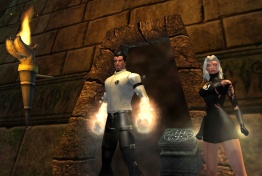 Hutchence is the strong silent type... shrewd, focused and observant. He believes strongly in law and order, but doesn't hesitate to cross the line into grey areas when needed. He also has a very dry sense of humor and is a bit of a film buff. Though most of the issues surrounding his upbringing as a mutant have been resolved, he would rather not talk about his past, whether the subject is his parents, his ex-girlfriends or his time as a criminal. Those subjects tend to make him brood, a trait he finds annoying in himself and others. He is a perfectionist and a futurist, interested in potentialities, and those who serve with him often find themselves inspired to become better at what they do. It is obvious to anyone who has seen him at work that the man has totally mastered his ever-growing pyrokinetic abilities to summon, control and wield fire. Colin himself seems amazed at how powerful he has become.

(Paragon Police Department Meta-Human Division) After having recovered from his wounds from the "Jackson Avenue Disaster" and several months of court-appointed psychological treatment and assessment, Colin was asked to join and lead a team in a specialized unit of "meta" or "super" powered officers trained to perform dangerous operations outside the parameters of normal SWAT team work and often alongside their SWAT counterparts. These operations can include serving high-risk arrest warrants to meta-powered criminals, performing hostage rescue and/or armed intervention from extraterrestrial/magical/meta threats, preventing terrorist (regular and meta) attacks, and engaging super-heavily-armed or meta-powered criminals.

Eventually, the PPDMHD lost it's political usefullness and lost it's funding. It was then dismantled and all officers assigned to other units.

With the PPDMHD shutting down, and not wanting to return to undercover work, Hutchence was left directionless until a man known only as "Dire Jackal" recruited him to join and co-lead StormForce ... a strikeforce of meta-powered agents. In addition to normal supergroup work in Paragon City, the team is sent on covert missions to combat dictators, evil organizations, and crime lords. On occasion, StormForce has also been known to conduct unsanctioned, private missions on behalf of its members. Featuring a group of super-specialists with enough money and power to do anything it takes to achieve their ends. With incredible resources at their disposal and some very smart, powerful heroes in their ranks, StormForce works from the shadows, unknown, unsuspected, to change their world for the better.