During the cold war, Jadewire was first initiated as Super Group to battle the villain called "The Red Scare" and his superpowered communist plots. After many conflicts over the years, with loses on both sides, Jadewire discovered the villain's secret base. Jadewire made quick on the information and set out to strike at the heart of the evil organization. Here, the final and fatal fight between the villain "The Red Scare" and the first leader of the Jadewire came to head in a titanic battle.

The fatal blow came not from either the nameless hero or "The Red Scare," but from the betrayal of the villain's own mad scientist henchman. As to two super powered beings fought, the mad scientist informs them he shall destroy them all with his latest doom's day device, taking over the organization and destroying its strongest opponent in the process.

In a last heroic act, the nameless leader damaged the device while battling the "The Red Scare," keeping the villain busy while the rest of the Jadewire escapes. The explosion soon after destroyed the base and most of the island. It is here the lost hero and "The Red Scare" perish.

It is soon after that Jadewire Super Base closed itself down and its members retired, perhaps heart broken from the tragic victory.

After years of inactivity, the Jadewire Computer Mysteriously reactivites, sending out a call to Heroes. A group of leaders heard the call and took the initiative to rebuild the wire.

This began with three individuals: Dusk Chameleon, Aural Feedback, and Spectrette. Dusk Chameleon, due to a series of unfortunate events, was voted out the wire rather early.

Thimble took his place, putting much effort into his new position. Though small in stature, his work was great. Soon after the wire took flight, growing rapidly with new numbers on the daily basis. Jadewire became a network of heroes, spreading across the streets like circuits on a motherboard. Low Security Heroes quickly become High Security Heroes, their skills and power raising rapidly with horde of villians arrested. But there was a sudden blackout on what was an other wise a smooth operation machine.

One of the Wires greatest leaders, Aural Feedback sacrificed herself to save the people she has grown so fondly of. In act of protecting the secrets of Jadewire, she had her mind wiped before falling into the hands of the Arachnos Orginzation. As to her fate, it is a mystery unsolved despite the efforts to unravel it.

The pair, Thimble and Stella Morte, went MIA shortly after. It did not stop there. The ghostly Spectrette also mysteriously disappeared. But before Spectrette departed, she chose Dark Zephir, and K.C. Krystal to become the new Jadewire Captains, for their passion and leadership they brought to the Jadewire. 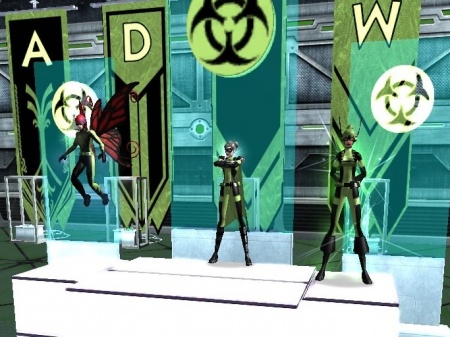 Currently, the Jadewire thrives more than it has ever. New members worthy of the training who survive the rigorous interviews are added on a regular basis. Though threats come from every direction, the new leaders fight with all their strength to see to it that every form of opposition is conquered. They, to date, have come out successful every time. Dark Zephir and fellow Captains Hellion Hiryu, and Horrag have vowed to do whatever it takes to keep the Wire alive no matter the cost. 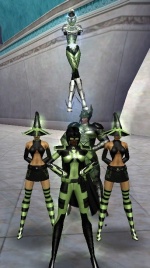 The Jadewire is far from alone in the city of Paragon. Partnered with some other heroes in the city, this coalition is at the forefront of the fight with the evil citizens who aim to harm and destroy everything these heroes have worked to protect.

The Jadewire
- The Jadewire is a peacekeeping group the advocates the use of hero work to instill justice, and is a place where heroes are able to form up with others whom have the same goal in mind. The Jadewire has a long history of protecting Paragon City and will do all it can to keep up the fight and protect Paragon's citizens.

The Jade Knights
- This former subdivision of the Jadewire consists of some of the most formidable warriors in the entire city. Created as a strike force to readily take care of any immediate threats, the Knights are the military branch of the Alliance and is lead by Hiryu Kushinada.

The Crimson Academy
- The Crimson Academy is geared toward bringing up new heroes and teaching them all the tools they will need to become honored heroes in the city. Led by Kitty Chow, the Academy is a great ally to the rest of the coalition and is the beginning for a great number of future heroes.

The Jadewire today currently contains a great many members, most of them are listed below. The ranking of members is in the order or Lead Captain, Captain, Specialist, Wireman, Operative, and Agent. The Captains are always watching for reasons to advance members, and with that in mind, the members of the Jadewire are some of the hardest working heroes in Paragon City.