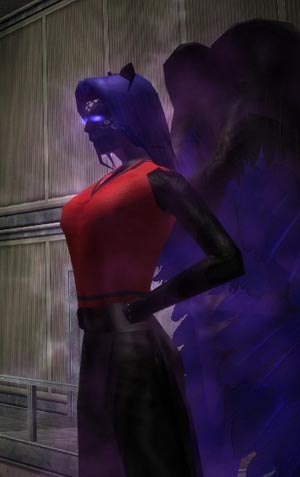 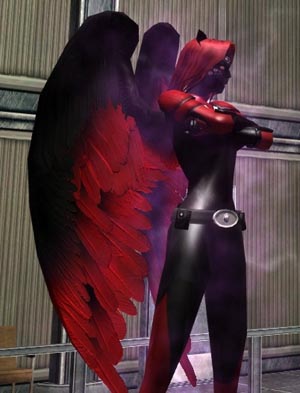 Okay it's not terribly original, but it's what I made up, impromptu and on the spot when I first played her. The first impetus to create her was the idea of using "Hiss & Purr" as bot names for a Bots MM. Mindre's player didn't want to use it, so I said I would. So I made Angelica. I was shocked that I got the name.

When you've got a young man that's basically signed his life away to work for Crey, you've got a young man that is very very bored and lonely. One particular young man decided that he had two things that might help him solve this - a genetics lab and lots of samples. Like samples of African black panthers and fallen heroes from the Rikti war. It was a side project at first, not something he really ever took serious, and worked hard to splice to genes properly in his spare time stuck at work all day.

Angelica began life as a panther. She doesn't have much memory of this time of her life, except for cages and being poked with sticks by humans. But then a nerdy kid geneticist at Crey gave her an injection that blended her genes with that of a fallen heroine from the Rikti war. Her first memories were of him having his way with her in the lab. She was so disgusted and humiliated by the experience. He'd declawed her as a safety measure, on the genetic level. But that didn't stop her from punching him, grabbing a laser pistol and shooting him until he stopped screaming. However then she started to learn about the consequences of that action. She fled the Crey lab looking for freedom, and was attacked by Crey. She ran to the police for help. Crey pressed charges. Angelica was sentenced to life in prison for first degree murder, and locked up in Zigursky.

When she was at her lowest point, when the whole world seemed against her, Arachnos came, like angels in the night. They rescued her and many other villains from Zigursky and set them loose in the Rogue Isles. However Angelica felt out of place in the Destiny project. She was not a villain at heart. She was a good person. The heroine whose DNA she had been given gave her a number of new traits and abilities. She used some of her new found inventive cleverness to invent robotic constructs to help protect herself, and her newfound darkness powers to help keep herself alive. However she never stopped longing to return 'home' to Paragon City and freedom from the oppressive tyranny of the Rogue Isles.

That chance finally came in 2010 when Angelica happened to reject an Arbiter's requests to kill innocent civilians and was due to be executed... until Longbow managed to screw up their plans, and Angelica switched sides. Surprised, Longbow listened to her request to return to Paragon City. They asked her to used her powers and robotics skills to help clean up Paragon City as repayment for the great and extensive misery she managed to cause there during her tenure as a villainess. Eager to atone for this, she willingly agreed, and set about working as freelance heroine, determined to prove herself to anyone willing to listen.

However not everyone is willing to listen. Some just say "Catgirl - she must be an idiot." Some say "An ex-villain? We can't trust her!" Some just laugh at her. Angelica tries to ignore those people and carry on best she can, trying to make a name for herself as a good guy through actions and deeds.

Speaks with a lisp, purr, or other speech irregularities. She is very much the cold blooded predator that a panther is. Her robots are just mechanical minions to act in place of her claws. But despite the prickly exterior, there's a softer feline inside, that is the young girl created in a lab that is still scared of the world.