Enantiodromos is a former City of Heroes/Villains forums contributor who played on Virtue and Freedom, and had a handfull of his old characters in prior versions of Virtueverse. Author to guides such as "Mind, Confusion, XP," "How To Be A Natural", and "Guide to Splattrollers," and has been playing since July of 2004. Member of the Repeat Offenders Network. After a long hiatus he has returned as a Virtueverse contributor with a few of his best Homecoming characters, essentially all of whom are on Everlasting.

La Viajera Magic Vigilante, Kinetic/Pistols Defender, L50+1 +6v
Can't or doesn't give or answer to any Christian name, and no memories she can bear to piece together, but plenty of nightmares. And a number of skills, both as a pistolera and a bruja. Which would never be enough. But there is a hunger for the road. A hunger to find someplace safe, and to help others find someplace safe. She is La Viajera, and she is the best there is at what she does-- helping people go where they need to go. 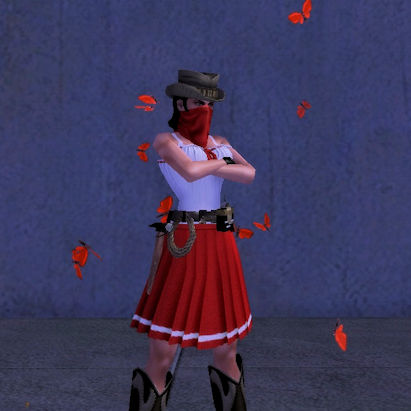 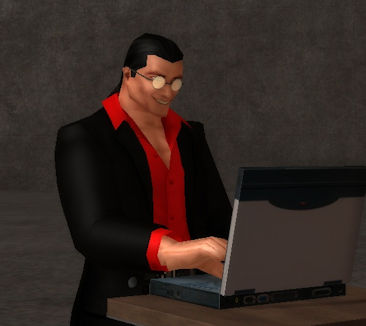 Oak Tree Magic Hero, Bio/Super Strength Tanker, L50+1 +4v
Long did the Great Old Ones of the Courts of Life debate what response to make to humanity. Only a few felt action was needed-- those who had communed most closely with the childlike apes, and the champion they germinated was scarcely more powerful than a single mighty tree. Then the Hamidon was created, the Courts of Life fell into chaos-- even madness. Oak Tree stumbled into this life without guidance, with no sense of the weight of responsibility he carried. Eventually, a vigilante sorcerer tried to take control of Oak Tree, but died defending him, and the Tree absorbed him. 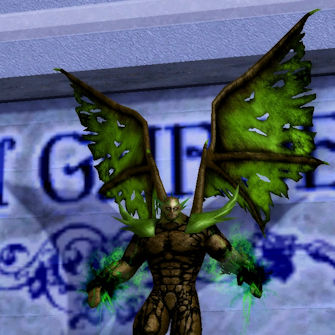 Emerald Sabrewing Mutant Vigilante, Widow, L50+1 +7v
Lost and possibly last member of a species of avianform sentients from a distant star, with incredibly sophisticated auditory & visual communication forms, forming a vast hyper-mind when many are in the same place. In isolation, individuals still display astonishing levels of prescient ability. Initially paranoid and hateful of humans, Emerald's life was saved by the Doctor in passing, and after breaking into torchwood facilities on the Rogue Isles and learning of his character, she dedicated herself to helping humanity and awaiting the Doctor's return. 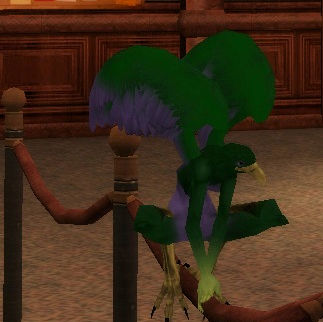 Spider Monkey Mutant Rogue, Savage/Will Brute, L50 +1 +45v
One more experimental program. Its paradigm: create the superhuman not by subtracting inferior traits, but by compounding strengths of all primates. Spider Monkey, a meta-primate-- one of the few specimens that survived-- possesses extraordinary superhuman strength and toughness, in addition to what was for some time though to be limitless speed. Technically this is not true, but is instead superhuman speed coupled with short-term prescience. (Tests of sheer linear travel speed demonstrate this limitation.) Iterations also include Spider Monkey's clone, who has taken up heroic acts in Paragon city, and Brass Monkey, a construct Spider Monkey pieced together out of the scraps of a fight between Nemesis Rex and Luminary. 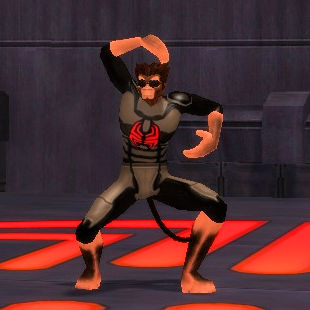 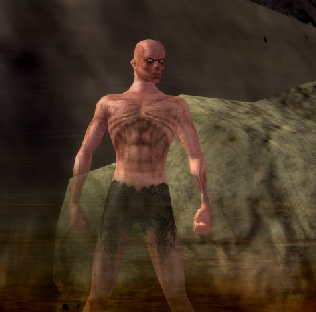 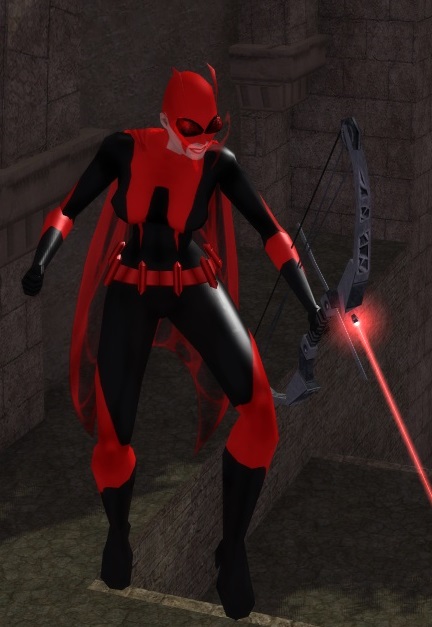 Entropy Dweller Mutant Rogue, Time/Dark Defender, L37
The end of time and the universe is a quiet, dark place where a few races parasitic hybrid monstrosities are the last remnants of living beings. Natural laws are malleable and occasionally, one of these beings slips backwards to an earlier epoch in the universe, promptly disappearing an a puff of ash in the relatively bright, hot, dense earlier eras. Entropy Dweller a mutant from this time, with a strange inborn power to survive such transitions. 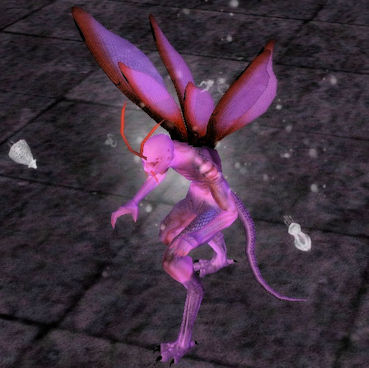 Madame of Pearl, Mutant Hero, Water/Time Corrupter, L50+1 +9v
Before she disappeared, the Goddess Merulina found herself at war with a species of advanced mollusks whose nautilus ships allowed them to sail the oceans of time. In a bid to end the war, a descendant of Merulina interbred with one of these alien beings, intending her offspring to be a powerful champion for peace, and ruler of the Oceans of Time. But the hybrid was flawed. It would take millions of years to hatch. The Coralax and the descendants of Merulina, the Carnival of Oceans, kept this memory alive for a time, but soon they devolved into an obscure cult, the Cult of the Blue Oyster. Much later, in Paragon City's distant future, the Rikti and Mender Silos rediscovered the time travel science of the Nautilids, and warred on each other across time. In a bid to broker peace between the two, the Dream Doctor travelled back in time and awakened the Granddaughter of Merulina and the Nautilids. Onto the shores of Paragon City stepped she whose name the Rikti, Menders, Coralax all knew: Madame of Pearl. 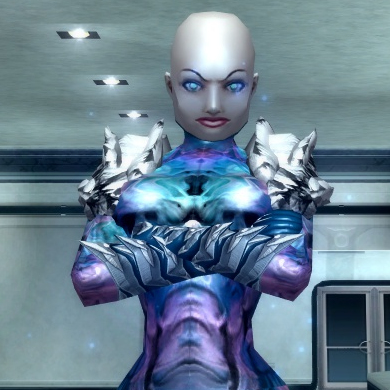 Mother of Immigrants, Magic Hero, Shield/Mace Tanker, L50+3 +9v
A mighty woman with a torch, whose flame Is the imprisoned lightning, and her name Mother of Immigrants. Her beacon-hand Glows world-wide warning; her flashing eyes command the tyrant's fear and idle rich men's shame. "Keep, ancient lands, your storied pomp!" cries she With silent lips. "Give me your tired, your poor, Your huddled masses yearning to breathe free, The wretched refuse of your teeming shore. Send these, the homeless, tempest-tost to me, I lift my lamp beside the golden door!" 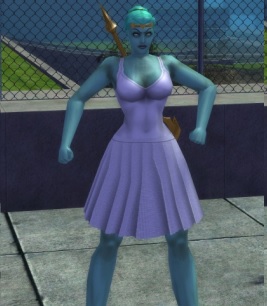 Hoplon Kaukhos Magic Hero, Super Strength/Shield Brute, L50 +1 +40v
Paul Ganas was a poor kid growing up in the shanties by the mouth of the Red River, between Helen Gate and Eastgate. All his friends struggled to get noticed by the tough guys they idolized --warriors. Paul trained harder than any of the others, but resented the appropriation of Greek symbols, disliked fascists, and wanted out. With a partial ride as an archaeology student at Brown University, he spent several years on digs, until after a series of unfortunate and embittering experiences, he stole a magnificent find on a dig he was on in Aidonia, near Nemea-- a strange bronze hopelite shield that, in the hands of the right person, was tremendously powerful. In fact too powerful for mortals. Paul has learned the shield has a connection to the Warriors, and believes he can unite and change them. 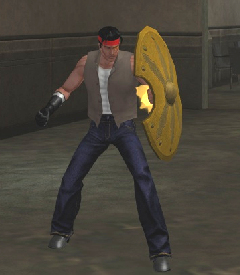 Mu Ronin Natural Hero, Dual Blades/Electric Armor Brute, L50+1 +16v
From a proud lineage of European barbarians whose sorcerous bloodlines have served the peacekeeping Republic of the Spider-Queen of Mazimbabwe for two millennia. Gifted in the Mu arts of energy channeling, relentlessly trained from an early age in fighting arts and their own specialized abilities, the Mu Sword Saints are generals in the Republic's army. When Asai Bhakin discovered that the Republic's greatest scientists, at the behest of the queen, were concealing the discovery of other dimensions where war and terror raged, he defied his responsibilities and left (his) Earth for ours, leaving behind him as he leapt through the portal, a circular letter to his peers and superiors, regarding the true nature of duty. 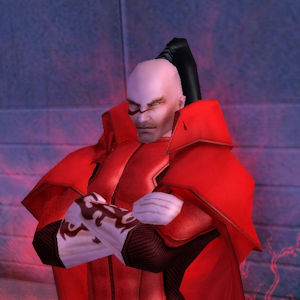 Beast Priest, Mutation Hero, Street Justice/Willpower Brute, L50+1 +3v
Ramon Reyes was seven when his father was murdered in front of him by a local power broker. Growing up an orphan in Chihuahua, he learned wrestling and, donning the leopard mask, wrestled abroad and earned the nickname "beast priest." Eventually, he had his revenge, returning to the streets of Chihuahua and murdering his father's killer. But Ramon did not escape reprisal, and like a family curse, his son Juan also was orphaned while young, and also grew up on the streets of Chihuahua. Juan took up wrestling wearing his father's mask and name. Learning what his father had done, he rejected vengeance and instead invested his inheritance and earnings in running an orphanage. When the Talons of Vengeance became aware of him, they tried to warp him, but he refused their call and fled into the mountains, where he fell into a cave and made a pact with an old Aztec God. 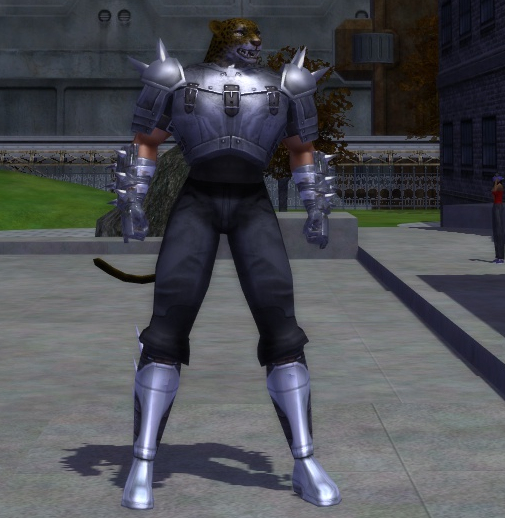 M'Sieu of Mystery, Magic Hero, Illusion/Darkness Controller, L50+1
Mansfield Casey, known for his role on the Imperium-approved rom-com about the ace pilot who kept a sorcerer supreme in a bottle, hated to disappoint fans. When they contacted him about rumors of evil magic, he tried to contact the Carnival of Light in First Ward, but intially had little success. Until the day a fan brought him a lost ruby pendant, which, putting on, he began to remember his double-life working with the Carnival, training in sorcerous powers. Mansfield is still not sure why the ruse, but his sorcerous training has advanced by leaps and bounds despite the carnival being tight-lipped about their reasons for keeping his activities secret from himself. 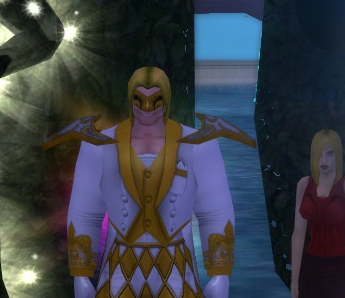 Core Wielder, Science Hero, Titan Weapons/Electric Armor Brute, L50+1 +9v
A clockwork specially designed by Praetor Keyes to serve as a Mobile Reactor Core transport utility unit. Then elite clockwork Hacker George X McKie made off with the 1150, and worked with the resistance as "Core Wielder." But when they came to eliminate him, George was forced to flee Praetoria to primal earth, by uploading as much of his personality to Core Wielder as he could. Core Wielder's weapon houses an infinite energy source. 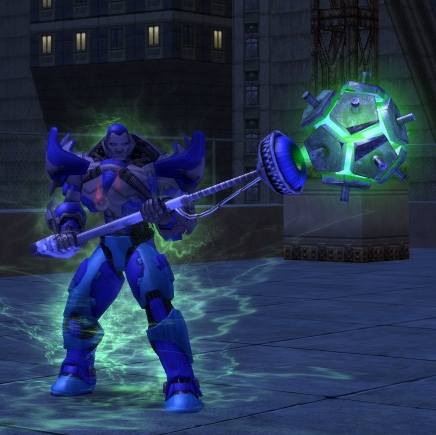 Sidereal Obscenity, Mutation Villain, Dark Armor/Radiation Melee Tanker, L50+1 +14v
There is something hideous about the dark between the stars. A malevolence of nihility that the most incisive scientist and the wisest magus alike seek to understand the essence of, but in so doing are confronted by that which makes them recoil in horror.
Kore's Disciple, Magic Hero, Plant/Dark Controller, L44
Boxing Ursula, Mutation Hero, Dark Melee/Willpower Brute, L38