The son of two former superheroes, Marcus Kelly will do everything in his power to protect Paragon City and make his parents proud.

Marcus Kelly inherited his spectacular mutant power from his father Edward Kelly; the original Human Flashbulb. On his twenty-first birthday his mother, the semifamous '70s superheroine Donna Defender, gave him the Defenderbelt - the source of her healing powers. Promising to carry on the family tradition of superheroics, Marcus has recently begun to realize that he is becoming far more powerful than both his parents combined. Going well beyond his father's ability to create bright bursts of light, Marcus is slowly developing full mastery of the light spectrum. As he gains practice and experience, he is finding that he can create complex illusions and even hard-light constructs and weapons. Along with his wife, who has recently taken up his mother's Donna Defender mantle, Marcus has devoted his life to ridding Paragon City of evil for good!

Marcus' family and friends are very important to him, as well as also being important to the people of Paragon City.

The Human Flashbulb and Donna Defender, Circa 1976.

Marcus' parents were a mildly famous superhero duo in the 1970s. His father (Edward Kelly) was the original Human Flashbulb, from whom Marcus inherited the mutant ability to channel bright bursts of light through his eyes. His mother (Donna Kelly) was the inventor-turned-superheroine known as Donna Defender. Currently, Donna Kelly has retired from super-heroics and spends her time in her basement workshop, constantly modifying and updating her old crimefighting devices. Edward Kelly vanished into a dimensional portal during the Rikti War, and his current whereabouts are unknown. 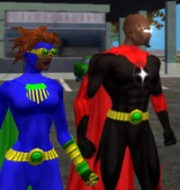 Michelle and Marcus on patrol in Steel Canyon

In the spring of 2006 Marcus married his college girlfriend, Michelle Simmons. As a wedding present, Marcus' mother gave Michelle all of her old crime-fighting gear - with additional modernizations and modifications - and Michelle proudly took on the mantle of Donna Defender from that day forward. Much like the original Donna Defender, Michelle is not the type of person who would act as a mere sidekick to her husband. She is a successful hero in her own right, having even once (alongside fellow "Galacto-Rangers" Rose Delphinium, Miles, and Ms. Mighty) saved Statesman himself from the clutches of the evil Praetorian Tyrant. Marcus is constantly awestruck by his wife's accomplishments, and the two are one of the few happily-married superhero couples in Paragon City.

Marcus has made many friends during his crime-fighting career, and they are all vitally important to him. He can frequently be spotted fighting crime alongside the likes of Rose Delphinium, Ms. Mighty, Foxy Ferret, Ether Chill, Pyroflash, Knight Sentinel, Xanatos, The Ensorcelless, Chogori, SincereAgape, Johnny Turbo, Monkey Girl, The Havok Brothers, Psi Cicada, Gadgix, Whitestar Sentry, Luficia, and the inimitable Galactoman. Marcus has also befriended the young pirate-themed villain Precious Bounty, and doesn't have the heart to arrest her. 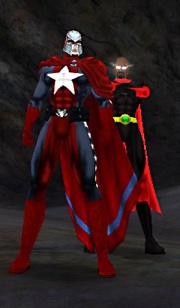 HFB with Statesman of the Freedom Phalanx

During his career, Marcus has worked with a number of Supergroups located throughout Paragon City.

Marcus was one of the earliest members of The Galacto-Rangers, and has often acted as Galactoman's strong right hand within the group... and though Galactoman has a tendency to treat him like hired help, the two remain close friends.

One of Marcus' proudest moments since first becoming a superhero was the day he was inducted as a reserve member of the legendary Freedom Phalanx. He had never dared even dream of such an honor as to fight alongside some of HIS heroes, and never stops being excited about his Reserve Member status. He is rarely called into active Freedom Phalanx duty, but still wears his badge as a mark of pride and distinction.

When the second Rikti Invasion struck Paragon, Marcus was one of the first to sign on as a member of The Vanguard and battle the Rikti Restructurists at every turn. Some of his close friends are often surprised by his willingness to work alongside villains in the battle against the Rikti, but Marcus feels strongly that a villain's mere willingness to fight the Rikti threat proves that they possess some decency, and are therefore deserving of a certain measure of respect.

Marcus - never one to miss out on an opportunity to join another legendary crime-fighting group - has also joined up with the recently resurfaced Midnight Squad. Despite his more or less total ignorance about all things magical, he has proven himself an asset to the group.

Marcus has also worked closely alongside The Challengers, The Frontline, The Freedom Force, The Galacto Guard, and The Action Pact.

The Human Flashbulb has a number of different abilities, due to his combination of intense combat training, genetic mutation, and high-tech gear.

Having been raised by two street-level superheroes, Marcus has been trained in self-defense and hand-to-hand combat since he was a small child. He is often able to subdue criminals without any sort of super-powered effort.

Marcus inherited his father's mutant ability to create blinding bursts of light from his eyes. Over time, and through intense training, he has developed his control of light to the point where he can now create complex illusions, manipulate hard-light constructs, and even become totally invisible.

On his 30th birthday, Marcus' mother gave him her first "Defenderbelt", the invention that allowed her to begin her crimefighting career. It is able to heal Marcus whenever he encounters danger, as well as heal others from a distance at the touch of a button. It also creates an anti-gravity field around its wearer, as well as a moderately effective forcefield. Marcus' mother is constantly updating the Defenderbelt with new modifications whenever she has time in her basement workshop.

Well of the Furies

Recently, Marcus met up with an agent of Ouroboros named Ramiel, and has been working to unravel the mysteries of the Well of the Furies. Marcus distrusts Ouroboros due to the fact that it is led by a future version of Lord Nemesis, and he distrusts the Well of the Furies even more... but he is willing to take the risk to protect Paragon City and the world from the new threat that villainous Incarnates pose. 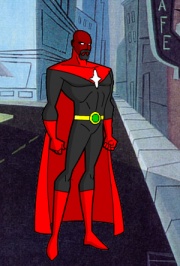 Marcus' major goal for the future is to find his father, who went missing somewhere in the multiverse during the Rikti War. He spends much of his time at the Portal Corporation offices, dimension-hopping in the hopes of stumbling across his father along his travels. 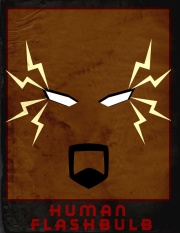 HFB as drawn by Ransim
During said dimensional travels, Marcus came across the dimension Alpha Upsilon 24-2. In that dimension, The Human Flashbulb was a crazed Archvillain who killed the entire population of the Earth and died bitter and alone. Marcus is constantly haunted by what he witnessed on that alternate Earth.

He has also been made aware of an assassin named Marcus Kelly operating on Praetorian Earth, and he is obsessed with tracking him down. He frequently infiltrates Praetoria and runs sweeps of the city and its underground tunnel system searching for his murderous alternate self, to no avail.

Marcus also desperately hopes to someday be called into duty as an active member of The Freedom Phalanx, which would make real a childhood dream. He is currently still on reserve status with the group.