"The people who are trying to make this world worse are not taking a day off. How can I?" - Bob Marley

Mister Astonishing has been a fixture among the super hero population of Paragon City since the 1950’s, when the mantle was first assumed by Aaron Rossiter I. How the Rossiter men have gained their powers is uncertain (some theorize that they have some sort of extraterrestrial heritage somewhere in their bloodline, while others think maybe it has been given by some divine source), but there can be no denying that they have been instrumental in the protection of Paragon City.

The Rossiter family came into money during World War II through the sheer luck of James Forsythe Rossiter, who was a delivery truck driver with a habit of betting on horse races. After investing his winnings into stocks, bonds, and mutual funds, he soon found himself a millionaire. His teenage son, however, found that something far more useful than wealth had come into his life. He found he had super powers.

Aaron Rossiter I first appeared in Paragon City as Mister Astonishing in 1954, operating as a free agent, but frequently teaming up with the Freedom Phalanx. He was also drafted to super-powered covert operations during the Vietnam War via the Might For Right Act (passed in 1956), until it was repealed in 1967. He retired from active duty in 1974, passing the mantle to his son.

Aaron Rossiter II began his operations almost immediately, and very few citizens noticed any change at all. In the 1980’s, he began working closely with Back Alley Brawler in the war against the street drug known as Superadine (also called “Supes”) and worked at many other endeavors during this time as well. He was widely regarded as being one of the most beloved of Paragon City’s freelancers, and his enthusiasm and love of the work brought joy and courage to many. He was one of the many heroes who assisted Statesman and the Freedom Phalanx during the initial Rikti invasion of 2002 at the age of 45, serving on the Alpha Team. Shortly afterward, he unceremoniously retired, without so much as a statement to the public, and was believed to have been killed during the invasion. The mantle of Mister Astonishing was hung up for another 5 years, until the 27 year old Aaron Rossiter III returned home from Chicago to learn his father was dying of leukemia.

Aaron Rossiter III assumed the mantle of Mister Astonishing in accordance with his father’s wishes in an updated costume, though keeping the same belt, the recognizable gold and blue color scheme, and gold A across his chest, though, unlike his father and grandfather, without the blue mask across his eyes, feeling that it was a hindrance to his peripheral vision. When he "re-emerged", many were shocked to see Mister Astonishing's return, and some were concerned that it may have been an elaborate ruse. He hasn’t been active long enough to make much of a mark yet, but has been an instrumental part of repelling the second Rikti invasion, which began shortly after he first took up duty. He has also done quite a bit of work striking out against Arachnos and Crey, and assisting Vanguard in the Rikti War Zone. 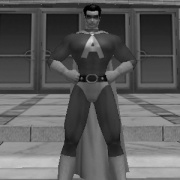 Golden Age Mister Astonishing.
The original Mister Astonishing costume consisted simply of spandex tights, a leather belt, a cloth cape, and suede boots and gloves. However, the new one was specially crafted by Freedom Corps from the same material used for Longbow uniforms; an ultra-light spandex/Kevlar/polymer fabric which is 100% tear resistant, flexible and extremely resistant to fire/shock/ice/ballistic/blunt damage. The boots and gloves are integrated into the upper and lower portions of the costume. The only original component of the Mister Astonishing costume is the belt, which serves aesthetic purposes only. When he had first taken up duty, some thought he was an imposter, since many believed Mister Astonishing died during the invasion and the current costume was so different than the classic one they were all so familiar with. Even the Freedom Phalanx, Statesman in particular, were skeptical that he was legitimate. They were soon pacified when, after meeting with the Phalanx and proving his legitimacy, Statesman publicly stated to the local media that this was, in fact, the real Mister Astonishing.
File:Misterawesomeversuscouncil.jpg
Mister Astonishing battling the Council.

Mister Astonishing is a man who feels both tremendous pride and tremendous pressure in his role. His mantle is both a blessing and a curse. He knows he must work hard to live up to the work his father and grandfather did, and the pressure weighs heavily on him. His public face as Mister Astonishing is confident, self-assured, and unshakable. But in private, Aaron Rossiter lies in bed at night secretly and silently lamenting his inherited legacy.

To his friends, he is warm and open. To the citizens in his charge, he is kind and compassionate. And to those who bring evil and corruption, he is steadfast, unwavering, and relentless.

He makes it a point to avoid collateral damage and safety risks to innocent civillians as much as possible, so he does not use environmental objects, such as cars or pieces of masonry, as weapons. ((OOC note: I do not have Hurl in my power set specifically due to this.))

He is also quite a philanthropist, donating money on a monthly basis to drug rehab centers, homeless shelters, battered womens' shelters, and Colossal Girl's charity for orphaned children of super heroes killed in action and during the first Rikti War. He feels there's more to being a hero than wearing tights and a cape and beating up criminals, and strives to reflect this in his actions.

Mister Astonishing is possessed of a superhuman strength matched by few, as well as being invulnerable to almost any kind of damage imaginable. He also has the ability to fly.

Despite his nigh-invulerability, Mister Astonishing is vulnerable to Rikti weaponry and fallout levels of radiation and, though highly resistant to most illnesses, is not entirely immune to disease, as evidenced by the second Mister Astonishing succumbing to leukemia.

Crey Industries and the Malta Group also have weapons designed to sap the powers from super-powered individuals, which can leave Mister Astonishing vulnerable if he is hit by one.

He is also vulnerable to magic and psychic attacks.

Mister Astonishing has three different suits he wears in the field. One is his standard suit. Another is one made of a nomex/kevlar weave covered in a thermal material to protect him from radiation. The third is a suit of Vanguard Impervium armor that he wears in the Rikti War Zone which has been specially painted for him in the gold and blue color scheme. He sometimes wears the original Mister Astonishing costume when he does public appearances, but not often in combat due to its lack of durability in comparison to the current one.

Since joining the GAH, he has carried a GAH comm unit with him at all times.

Mister Astonishing was not affiliated with any supergroup, considering himself available to any group who needs him at any time. This has recently changed as he, after careful observation, recently joined the Gods of the Golden Age, feeling that freelancing was more of a setback than an asset in the current generation of costumed crimefighters. He chose the Golden Age Heroes based on their performance in the field, moral values, and commitment to justice.