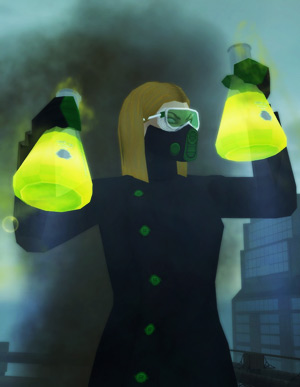 It worked in the movies!
Well it ain't working now!
What do you mean the movie lied?![1]

A Date with Rigor Mortis

Life had been nothing but average, in that dull beige colored sort of way for one quiet blonde research assistant. Dull, ordinary, and simple with a regimented routine. Life had after all always been a routine, do well in school, go to a good college, get a degree, get a good job, get published in leading scientific journals. That routine didn't include other people however, they don't understand why routines are important, they like to interfere with plans with their own frivolous desires and needs. So everyday was the same, wake up, eat breakfast, shower, arrive at work promptly at 5 A.M., feed the test apes, then dutifully go through the list of daily tasks required before going home, eating dinner, watching three stale regurgitated sitcoms and going to bed at 9 P.M..

The raid had been straight forward, the radical group of animal rights activists, spewing their nonsense about animal intelligence. They couldn't possibly comprehend the importance of the apes to science, to advancement. It's also likely they didn't comprehend the consequences of locking the blonde research assistant into the chemical testing chamber. It's also reasonable to believe they didn't realize the potential lethal nature of the current test chemical 2-4-5 Trioxin.

It didn't take long for the lingering gas and residue in the chamber to kill the dull blonde research assistant. A lifeless body was found several hours later, the victim of animal rights terrorists, the papers would blare.

Except the dull blonde research assistant wasn't dead, and many hours after being delivered to the county morgue she woke up, angry, and hungry as hell. Typically stored under pressure in large steel drums, chemical agent 2-4-5 Trioxin[2] was developed originally by the Darrow Chemical Company for the United States military. It's purpose was to serve as an herbicide for marijuana plants. Imagine the surprise of the Army when they realized the gas also restored function to the nervous system of cadavers, dismembered body parts and even dead animals and insects.

An incredibly toxic chemical, single exposures to concentrated amounts of 2-4-5 Trioxin can kill a human being and then revive them again from the dead. Unlike zombies created through voodoun magic, or other means, those created via 2-4-5 Trioxin retain their intelligence and former abilities, including the ability to reason. That is at least until the rigor mortis kicks in and the hunger begins to gnaw at your insides like some sort of fetid creature trying to claw its way out.

Later tests on subjects and cadavers exposed to 2-4-5 Trioxin showed a marked increase for violent, often uncontrollable behavior. Subjects who ended up in such states were often unable to reason once their hunger had moved to this stage. What is notable is that in most cases the IQ of the subject was a strong determining factor in their ability to avoid completely succumbing to this state of hunger induced rage.

The Love Affair with Science Science had been her first and only love, it was calculating and as unforgiving as she. Chemical engineering had come naturally, and though she had started as a mere research assistant she had aspirations of moving beyond to her own research and grants. As a young child curiosity had motivated her to explore, question and do things that many others, her parents included found to be questionable or horrifying.

A dissected cat, scores of dead, dismembered insects, mammals and birds, that quickly moved to the desire to learn how certain things reacted to others. Why were chemicals poisonous, how did they affect living creatures, non-living items, etc. As she grew older, her desire to experiment was replaced by the desire to learn, and falling into the comfortable routine of the scientific method. Teachers and professors in college would often describe her as brilliant, but socially maladjusted, even more so then her peers.

It's not to say she was needlessly cruel, or overtly emotionless, just that she seemed to lack a certain level of human compassion that even her peers exhibited. Things that would gross out, or unnerve her peers would merely fascinate her. So its no surprise that she upon waking in the cold storage of a morgue she immediately began to assess her situation in a systematic fashion. She asked the normal questions, what, why, how?

It was that curiosity rather then aversion that would drive her to find a more permanent, and sustainable method of living in her current state of unlife. After all, making this form sustainable would be a necessary goal if she was going to manage to exact some revenge on the foolishly misguided animal rights activists that had disrupted her routine existence. 
Sensitive to the touch.[3]

Revenge, contrary to popular belief isn't best served cold, its best served as immediately and effectively as possible. Its also entirely preferably if you get to enjoy the terror as your targets experience the full extent of your plan.

Trioxin: I do not see enough COWERING! Cower fools! COWER BEFORE SCIENCE!

Lunar Phase: You people think you are so powerful, but you fight in groups of like 12, take one on one.
Trioxin: That defeats the purpose of teaming up to destroy you now doesn't it?

Masked Renegade: A party? WHY WASN'T I INVITED!?
Trioxin: No one likes you Renegade.
Masked Renegade: Uh, I beg to differ. I pay $9.99 a minute on a phone service just to hear that someone likes me. So... who looks stupid now.

Trioxin: You'd make an excellent test subject Renegade, just hold still so I can catch you.