Adjutant Agilo is a 7 year council and 5th column veteran, joining after hellions burned down his barber shop.

Patrick Agilo was born in Italy, living there for 6 years his parents finally saved enough money to immigrate to the U.S. Now living in a run down apartment while his father worked a minimum wage job while he went to school in paragon dropped off by his father everyday on his way to work. seeing how his family's success depended on him completing school, he did so. living through the normal hardships of bullying and homework. Graduating high school he took a job as an assistant to a elderly barber in a small shop in downtown paragon to fund for collage while being taught to cut hair on slow days.

things turned interesting when Patrick got a phone call from his home in the early morning when informed his employer died that night from a heart attack, and more so when he left Patrick the deed to the barber shop. Now abandoning plans for collage he ran the barber shop full time sending money to his parents occasionally.

As all businesses, Patrick had to deal with skulls and hellions demanding extortion, normally chasing them off with a shotgun and Italian curses, and suffering mild burns. in 2002 Patrick had another late night phone call, this time his shop had been burnt down and it was suspected arson. Without insurance he had no source of income and was desperate, but who would hire a high school educated Italian American? why the 5th column!

Life in the column

Patrick was normal to Adapt to a military lifestyle, while not one for being physically fit. he soon shaped up, passed training, and was given his rifle. surviving the rikti war and council overthrow with his comrades, he rose to the rank of adjutant and had a comfy military career.

...or maybe not, in 2007 while off duty and drunk in a bar with an archon and squad mates, Patrick made insults to council leadership, when the archon called on that. Patrick became verbally aggressive and called the center a poor leader and a leecher of military forces. The council happy to make anyone who even thinks of the words "center" and "suck" in the same sentence a fuzzy freak of nature, scheduled Agilo for such a week later and moved him to the eclipse ranks.

When Agilo's base had a man power surplus, he was assigned to Port Oakes base #316, headed by Dr Von Dread Now adjusting to their...questionable work style an allies.

One of the rare experiences of love Agilo has had beyond highschool, when drunkenly stumbling about Cap au diable, he came across the reporter cornered by two angry men yelling how they had been portrayed in last weeks news, dispatching the two out of impulse the Woman thanked him, telling him "you're not so bad...for a council troop". he now watches the news when it is on and he has free time, having a very clear crush on the reporter and too shy to talk to her (With good reason, who in their right mind dates a warwolf?)

One of Patrick's hobbies in life, Agilo is a Fan of classical of most kinds and limited band and swing.

All fuzz, all the time

While most warwolves learn to switch between normal troop and rock throwing machine, Agilo ignores to, why is a simple answer to him. he understands that his state was declared a punishment, and to him this is bypassing the punishment and thus cheating the council and his honor.

Agilo shows the personality of Most council soldiers, not overly kind yet having emotion and loyal to the center. Agilo's case is this but with 90 or so I.Q. points burned off. often speaking in slow drawn out sentences. He is normally calm but when frightened or stressed will scream, panic and get aggressive, and in combat situations speaks in one word expressions usually words that mean to hurt or kill, or will outright make unintelligent roaring noises. 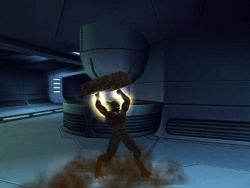 Raid Engineer Harper One of Agilo's closest friends, Harper and Agilo normally spend their days getting into trouble by pranking Mind Lord Heba, drinking, or getting dragged along in other's affairs.

Dr Von Dread the silly Archon of the base, von dread's cheery demeanor among his troops has resulted in Agilo growing a respect and loyalty to him.

Mind Lord Heba After Harper and Agilo's first prank on Heba, resulting in him ending up purple for a time, since Agilo has always disliked Heba and often suggested violence on him, Harper always asking him not to as he is useful to him.

Warwolf Kordrenis Agilo and Kord often fight like a married couple, and over a multitude of things. From Kord's pet cat to the dignity of eating dog treats as a snack food, most of the time this just ends up as them growling at each other then moving on, at one point should they openly fight, lots of property damage would likely result.

Ambassador Shintou "Bug man" is one of the people Agilo dislikes most, After being ordered by his base archon to kidnap his fiancee; he and a few allies came by and defeated him and dread, freeing the woman. He now holds a grudge for that defeat, justifying it with "it was orders" and sometimes challenges him to duels to feel better, most of the time losing.

Like most council warwolves, Agilo has a thick hide able to shrug off most handgun rounds, sharp claws if required and super human strength.

Agilo is basically stupid, so any most form of outsmarting or tactics will out-do him, and having a weakness to psionics, Agilo is also prone to pause when serene music plays.

Seems to have unusually beige Claws, the truth behind this is they are manicured and is one way he keeps them clean as possible.

Agilo was actually spawned due to a diceroll, wanting to join Requim's decree i did the roll dice emote with these rules, 1-2 will make a vampri, 3-4 will be a galaxy, 5-6 will be a warwolf, i rolled a six and went with it