The character of Agent Britain was conceived by Cyphre to join in on the extremely fun idea of the Steadfast Soldier Initiative, created by ColonelH. He will hopefully become a very functional, non-American addition to the SHIELD-influenced, paramilitary-psi-arcane-super-themed SG, S.C.O.R.P.I.O.. He is a rugged old soldier, scientist, inventor and hero, inspired in part by Marc Slayton, The Winter Soldier and Union Jack.

• History:
Nathan Charles Edison was the only child born of the short union between Natalie Edison, an English former model and topless showgirl, and Charles Bullingdon, a high ranking member in the Ministry of Defense... a scandalous but little publicized extra-marital romance that was echoed by the much more infamous Profumo Affair over thirty years later. Raised quietly in the small town of Maldon, Essex, Nate was a shy and studious youth, living a relatively quiet life with his mother and her boyfriend, Peter Hensley. After the death of his mother in a car accident, Nate took a fellowship at The University of London's School of Oriental and African Studies (SOAS).

In 1943 during the peak of the second world war, Nazi super-soldiers StormKorps terrorized the British Isles while the Japanese Empire's Imperial Wind tried to seize control of the Pacific. Fearing the worst, the allied militaries proposed a joint super-soldier project in case they became tactically crippled in those key areas. The project was titled "The Steadfast Soldier Initiative" and from it stemmed many super-soldier projects. One of those projects was "Lazarus", the super-soldier method designed by Dr. Arthur Frank that gave birth to the American super soldier, Colonel Hero.

An extra-governmental intelligence and security organization formed to meet the rising storm of exceptional threats beyond the usual scope of normal law enforcement and military forces. SCORPIO is dedicated to protecting the nations and peoples of Earth from terrorists and all technologically-advanced, extraterrestrial, psionic, superhuman, occult, paranormal and supernatural menaces, and often assists such organizations as Alpha Watch and The Cerulean Legion in apprehending threats to national security and world peace.

Agent Britain can often come off as a loner, though this is not the truth of the matter. In actuality, he rather enjoys the company of others but prefers to listen rather than speak. A true gentleman, he values honor and loyalty ....counting numerous friendly acquaintances, but few true friends. He has had romantic and platonic relationships with several women, and keeps in touch with a majority of them, often sending them little gifts when he is too busy to make a personal visit.

Nathan is extremely intelligent and keenly observant, considered a leader in his field of history and archaeology. Due to an increased lifespan and diverse career paths and interests, he has traveled the world and amassed an intimate amount of knowledge of foreign languages and cultures.

Having spent many years in the field as a scientist (and later as a Egyptian-themed hero) after completing his formal education, Nathan has become an expert in the field of Egyptology (a major field of archaeology, the study of Ancient Egyptian history, language, literature, religion, and art from the 5th millennium BC until the end of its native religious practices in the AD 4th century).

During his time in the British Special Forces the British Secret Intelligence Service (SIS) and also as a London and then Paragon-based 'super' hero, Nathan has become a seasoned unarmed and armed combat expert, and holds a black belt in Tae Kwon Do and a brown belt in Hapkido. He is proficient with most weaponry, including firearms, though he is partial to bladed weapons. He has demonstrated sufficient skills to defeat the high-ranking Tsoo warriors and Council soldiers in single combat. He is also an accomplished pilot and highly skilled in the field of espionage and covert operations.

Nathan is an olympic-level athelete.

Agent Britain' work relies at times upon non-detection. He has become quite adept at moving silently and blending into the shadows. He is able to sneak up on most enemies undetected and subdue them using either lethal or non-lethal means when he needs to do so.

Agent Britain possesses four (two on each arm) 13" blades, or 'claws', that can extend from his cybernetic arms through mental command via nanites in his bloodstream or through a coded touch-pad response on Nate's palms. Created of an classidied metal alloy, the claws are razor sharp and can cut through most known solid materials. Agent Britain' chances of slicing completely through a substance depends heavily upon both the amount of force he can exert, and the strength, density and thickness of the substance. His metal arms are about 1.45 times as strong as normal human weightlifter (Nate can bench press around 1000 lbs) and also give added weight and hardness to his blows, and thus dramatically increase the effectiveness of his punches. 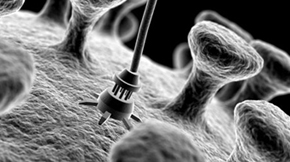 The advanced nanites running through his veins give Agent Britain a meta-level 8 regenerative healing factor, allowing him to heal quickly from injuries that would most certainly kill a normal man. Agent Britain's healing factor also affects a number of his physical attributes by increasing them to superhuman levels. His stamina is sufficiently heightened to the point he can exert himself for numerous hours, even after exposure to powerful tranquilizers. His agility and reflexes are also enhanced to levels that are beyond the physical limits of the finest human athlete. Due to his healing factor's constant regenerative qualities, he can push his muscles beyond the limits of the human body without injury for days and even weeks on end, so long as he makes certain to eat often.

The nanites also have the effect of making Agent Britain's mind highly resistant to as high as level 9 telepathic assaults and probing, including alien and extra-dimensional psionic attacks, as well as slowing his aging process to a crawl. Though he is close to 60 years of age, Nate has the physicality and appearance of an extremely fit man in his early to mid 30's.

Edison has created remotely-controlled and summoned, floating 'Power Drones' that have the ability to stimulate his body's nanites for short periods of time, boosting their effectiveness. This has the very desirable effect of granting him bursts of extra strength... which in turn increases his damage output and his ability to avoid attacks. These drones are easily damaged and are for some reason often targeted by enemies.