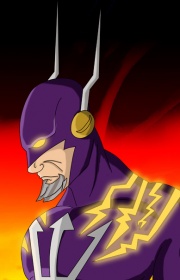 Nicolai Furst, aka Baron Blitzman, was not always the powerful speedster the history books remember him as. Originally, Nicolai was a small-time crook that utilized a "Zapp Gun" to harness his own innate ability to control electrical charges. (For his own powers were too weak to function on their own.) His criminal career lasted only a couple of years before he was beaten and arrested by the superhero Xanatos during a failed bank robbery. After his arrest Nicolai was left to rot in the Ziggurat and was largely forgotten to the superhero community at large....

But Baron Blitzman is forgotten no more! The purple headed menace is back! Broken free from the zigg by powers unknown, Baron Blitzman is now on the warpath. His powers or speed and lightning much greater than before, he has only one man lined up in his sights: Xanatos. Target #1.

While, in the years that followed, Baron Blitzman fought against Xanatos to such a violent extent that many eventually took him to be the hero's greatest foe, he ultimately fought alongside him when he needed it most. During Rularuu's invasion of earth in 2012, in an event that has come to be called "The Battle for the Multiverse", Baron Blitzman gave his life; heroicly turning himself into a single bolt of lightning, tearing open the ziggurat, and bolstering Paragon City's defenses against the ravager with a small army of super powered criminals.