BaronessSamedi is modeled as a female version of "Baron Samedi", the character played by Geoffrey Holder in "Live and Let Die". She has the same rich French/Creole accented voice, the same obsession with Tarot cards, and the same maniacal laugh.

In all guises, Samedi has an anodized stainless-steel plate covering the right side of her face.

Samedi usually appears in a black dress and thigh-high black stilettos, covered in white tribal designs and adorned with bones. She paints her face to resemble a skull, and her upper arms and gloves are also laced with the 'spines' of small animals. Her belt has a grinning skull on it, as does each shoulder; she wears another on a chain around her neck, so that it nestles within her cleavage. She wears a bisected silk cape and a white top hat, and carries a bone-white carved cane. Her eyes are usually open and staring, with no discernable irises; technically she is blind, but through some magical means can still 'see' perfectly.

When she is incognito as "Mary Baptist", her attire is usually leather pants and motorcycle jacket, stiletto boots, and an alluring leather bustier. Her hair is usually in an afro, instead of bound tight under a hat. In this guise she eschews the white "skull" makeup, instead wearing blood-red glossy lipstick and matching eyeliner.

She also has been seen in a black velvet dress.

Samedi is ... a little bit crazy. Getting shot in the temple by her newly wed husband and left for dead might be a contributing factor, or it could be the fact that Papa Legba, the Loa of Death, has been 'riding' her ever since. She's danced the mambo with Death since her late teens, and although this has allowed her to keep her youthful form for decades beyond expectations, it's also hardened her into a ruthless and sadistic killer, with little to no compassion for those weaker than she.

Samedi's abilities are all related to Papa Legba, the Loa of Death.

Samedi can project shadowy tendrils, bolts of 'netherforce', and hurled curses. These attacks drain the vitality of whoever they hit, as well as reduce the target's accuracy slightly.

In addition to the projected effects, Samedi can wrap her hands in inky tendrils, then proceed to pummel a foe into submission, or reach forth to tear portions of their lifeforce away, to restore her own.

In addition to her directed attacks, Samedi can call forth effects that are more insidious. She can create pools of sticky cloying darkness on the ground, envelop herself and her allies in thick fog, or drape a deathly cloak around a foe, plunging them (and any nearby foes) into darkness. She can channel the spirit of Death through her gaze, petrifying many foes in their tracks. She can sap a target's ability to regenerate, and use it to heal herself and any nearby allies. She can also use her foes as a 'sacrifice' to revive one or more fallen allies; the targets of this spell are left stunned, their vitality drained.

She can also pull allies to her side through the spirit realms; the trip takes seconds, although what one sees or hears in those seconds can be terrifying to some.

Samedi is not bound by the Earthly law of gravity (although she still must breathe to live; she is limited to altitudes where there is enough oxygen to breathe unassisted.)

Samedi's attacks are terrifying, but not very powerful. She does better as support for others.

She is claustrophobic, a result of the 'zombie' ruse she pulled to get out of Haiti, which involved being drugged to appear dead, and then closed up in a casket for three days, paralyzed, blinded, and unable to move.

She must now rely on synthetic tears to keep her eyes moist, as her tear ducts no longer function. She rarely blinks.

Samedi relies on magic for her sight, specifically the loa of Papa Legba. Magic-dispelling effects render her blind. 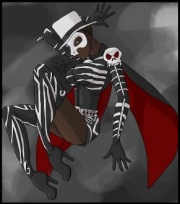 Jean-Marie Bautiste was always meant to be a priestess of voudoun, and was groomed for the role from a very young age. When she reached puberty at 15 and her body blossomed from a girl to a woman, in a 3-day rite, she was 'introduced' to Papa Legba, the Loa of Death and Transition. She came out of the frenzied dance/ritual an extremely fit, sexually charged dervish, yet within her eyes shone something powerful and dark. From that day on, she was able to predict when others would fall sick or die, and also 'boost' fertility of women in her village. It was said that if "Maiden Samedi" spent a night with a couple, they would conceive.

During one of many of Haiti's civil wars, word came down from Papa Doc Duvalier that the "Maiden Samedi" needed to disappear, as he couldn't adopt the role of "Baron Samedi" with a real houdoun doing a better job of it. The task was given to one of his young recruits, who wooed her, courted her, married her... then shot her point blank in the face with a .22 derringer that he'd concealed in his tuxedo cummerbund. The shot went slightly wide, and struck Jean-Marie in the right temple, scarring her face and shattering the bone, but not penetrating. She dropped as if poleaxed, and the would-be killer bolted.

Jean-Marie woke up from the week-long coma a changed woman. No longer cheerful and friendly, an iron mask covering her shattered cheekbone, she had been consumed by the Samedi persona, cruel and sadistic... and wielding magics that up to that point had only been spoken of in legends.

Her husband was the first to fall to her Touch of Death, his face frozen in an expression of eternal terror. Several other victims followed, until an entire squad of Tonton Macoute was dispatched to kill the woman. They found instead a casket with Samedi's body, already cold and prepped for burial.

They didn't realize, she only LOOKED dead....

A month later, a woman claiming to be "Mary Baptist" rented a room in the French quarter of New Orleans. She had an anodized stainless steel plate covering the right side of her face, and was said to be dour and unfriendly, but an excellent soothsayer. She made a decent living selling 'love potions' and other voodoo paraphernalia, but then was discovered to be blackmailing several of her clients. Arrested and tried for larceny, fraud, and extortion, she was under escort to the Louisiana State Prison, when she escaped, her guards all dead of what appeared to be fright.

Several more appearances followed, in Atlanta, Charlotte, New York, then Paragon City. A run-in with a hero in Paragon landed her in the Zig, where she was placed in a warded cell (and forced to wear clothing with anti-magical runes sewn in). She languished there for ten years, completely blind, until the very first Arachnos 'breakout' occurred and her wards were broken.

Samedi has befriended a young heroine named Holly. She was enjoying the girl's company when a rather brusque and irritating being calling himself Shade Nefarious stated that the girl was HIS to do with as he saw fit, and that Samedi was trespassing. After a rather heated exchange (in which Shade told Samedi that if she didn't back down he'd 'remove her from all planes of reality'), Samedi decided that she didn't need this kind of hassle over a mere girl, no matter how special.

Since then however, Samedi's done a lot of thinking. She went looking for Holly after hearing the girl wasn't feeling too happy with herself... and somehow, they managed to reconcile.

Since the brou-ha-ha with Shade, Samedi has reunited with an old friend and lover, the minotauress Jessica Meade. The two seem to be quite happy to have found each other after over a year of separation. Samedi has decided that Jessica, who is hermaphroditic, will be the one to give her a daughter; Jessica has also asked for Samedi's hand in marriage.

Samedi engaged in a duel with a demon-being calling herself Dark Widow, who had suddenly appeared to claim her for her "Widow Army". She managed to actually capture the beast, breaking loose the collar around her neck, which resulted in the being's soul being ripped from her...

...or it would have, had Samedi not used the Monkey Fight Club patrons as 'donors' in her Howling Twilight spell, which restored the creature's soul (or rather, substituted pieces of souls from the patrons!).

It seems that Samedi now has a pet, of sorts, which she's rather befuddled by. On the one hand, she doesn't want "a mouth to feed" but on the other hand, Dark Widow is a powerful ally, and rather pleasant to be around once you get used to the horns, tongue, and short dark fur. She's given the demon her freedom, but so far, Dark Widow doesn't seem to care - she's still extremely affectionate toward the houdoun that 'broke her free'.

Samedi and Jessica's last meeting resulted in pregnancy, which is progressing with no complications (although the baby is large enough to make the houdoun appear to be carrying triplets). However, Jessica's continued absences are starting to wear on Samedi's heart, as she does NOT want to raise the child alone. Sadly, the two have not yet set a wedding date. The minotauress has taken work with Rogue Entertainment, as a "regular job" instead of the mercenary work she was doing before. Samedi's thoughts on the nature of the job are ... tolerant, as she understands the reasons behind Jess wanting a regular paycheck.

Samedi gave birth to a 7½ pound baby girl, whom she christened Annabelle Christienne Bautiste-Meade, in the Sharkhead Infirmary on May 1st 2008. Jessica was nowhere to be found at the time, and has yet to turn up since.

With Sayuka's disappearance, Dae Se Chan has dissolved the cartel known as the Crimson Dawn. Samedi has taken up employment with the Stiletto-Heeled Executioners, alongside her former Dawn comrade, Dame Demolition. It is rumored that others from the Dawn will follow.

Samedi was originally rolled during CoV Beta, then re-rolled on Triumph after the end-of-beta Freedom Phalanx Invasion event. I've since moved her to Virtue, after attempting to recreate her twice.

Samedi occasionally will burn a Tarot card. What significance this action has is unknown.

Although well into her nineties, she has the appearance, vitality, and libido of a woman in her early 30's. She can induce fertility in nearly anyone, or alternatively, take it away.

She speaks in a rich sultry Creole accent, and when in her Samedi guise, has a habit of referring to herself in the third person. The accent is less noticeable as "Mary Baptist", but it's still there.

Know a rumor about Baroness Samedi? Add it here!