Kate O'Riorden is an active member of the Hyperion Force and often works with its members. Before joining the Force though, Kate often joined forces with plain clothes Longbow officer Pebble and the dark hero J Kurayami, the former of which has unfortunately since left Paragon City whereas the latter has recently joined the Hyperion Force.

Mango
Besides her superpowered friends, Kate has one other individual who she is incredibly close to her, that being her kitten Mango. Kate takes the little orange cat nearly everywhere, including her missions against the numorous enemies of Paragon City. Unknown to Kate, Mango has recently displayed signs of above average intelligence and possibly sapience. Regardless, Kate often jokes about how she's teaching Mango to be a superhero and even has a little red cape that she sometimes ties around his neck.

Kate is a lively and enthusiastic soul with a gung ho personality. She oftens finds humour in even the most dangerous of situations. However, she is very protective of her friends and has on more then one occasion confronted enemies vastly more powerful then herself in their defense.

File:Supercomp.jpg
Kate using the Hyperion Force supercomputer to look up gay porn, much to the ire of Bidon De A, Arroan and John Flag.
Kate's enthusiasm for life does however have its downsides, such as her nigh inability to exercise a little self control and think before speaking, this often manifests in her accidently insulting others or giving them annoying nicknames which aren't at all welcome. An example of which would be when she used to call Arroan Eunuch Boy, which eventually led to a short live rumour that Arroan was indeed a eunuch. Just like her speech, her actions sometimes lack forethought, which have resulted from mild annoyences of others to actually putting herself and others in danger. However, for all its shortcommings, her light hearted recklessness is generally welcomed.

Sometimes, she exibites an almost childlike curiosity towards whatever catches her attention. She has been known to tug on wings, tails, horns and other strange growths which adorn some less then human residents of Paragon City.

Kate received her powers after being cursed by a rogue M.A.GI agent, therefore her powers are magical in nature. However, she has recently taken to augmenting them through technological means via her battle suit.

Her main powers generally fall into two categories; ice based projectiles that she flings from her left hand and a firesword that she can create in her right.

Kate is capable of forming ice in the immediate area around her left hand. This allows her to fling shards of ice of veriying density at enemies. While these ice blasts form the basis of her ice based powers, she is capable of other feats including freezing targets in blocks of ice, sending forth chilling winds and even summoning hailstorms. 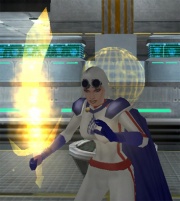 Arguably the power Cap'n Contradiction is most associated with, the firesword is Kate's favourite weapon when engaged in melee against her enemies. However, in a rather cruel twist of irony, Kate is only capable of summoning the firesword in her right hand, which would have been fine had it not been for the fact that she heavily favours her left.

Because of this, she has a nigh iconic uncordination about her when fighting with the firesword, nevertheless the sheer power of a sword made of scorching flames is often enough to get her through sticky situations. 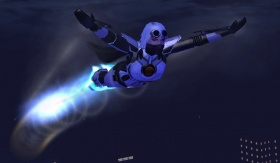 Kate flies through the night sky in her battle suit
Shortly after her encounter with the mage who cursed her with her powers; Kate began to develop the ability to fly. Initially starting as simply being able to levitate short distances, her power has matured into full flight. She also recently received a pair of rocket boots from her friend Kherai and has attached them to her battle suit, further augmenting her speed and control in the air.

Due to her job as a mechanic, Kate is no stranger to machinery and has been able to fix quite a few minor mechanical failures within the Hyperion Force base. Her skills however are nothing compared to in-house gadget guy Revibe, nevertheless she is an able substitute should Revibe not be able to land a hand.

While not an ability persay, Kate has an effect of making her adversaries underestimate her, mainly due to her at times childish nature and her almost complete lack of knowledge about superheroes and villains in Paragon City (she rather infamously still believes that Arachnos the name of a cartoon show). This often gives her the advantage of suprise in battle as villains find out rather painfully that she is a lot more competent at throwing shards of ice.

Also, her left hand is uncommonly strong for a woman of her weight and build, unfortunately this is offset by an inversely weak and uncordinated right.

Kate's custom made battle suit which she claims to have stuck together with discarded parts she found in Founder's Fall. It is equipped with rocket boots which aid Kate in her flight as well as a teleportation system, though the latter is currently malfunctioning. The suit has two main layers, an inner black heat retardent fiber mesh and an outer metal plating, the exterior plates are spaced apart between sections to allow Kate maximum mobility.

One of the three magic artifacts given to Kate by the Cabal, Sally, as Kate now calls it, is an enchanted blade which deals great damage agains't supernatural enemies. Also, unlike her firesword, Kate is free to use Sally in her dominant left hand, thus resulting in stronger and more skillful sword fighting.

Another of the three magical artifacts given by the Cabal. Earl (Again named by Kate), has the power to create protective force fields around her, shielding her from harm.

The last of the three artifacts and unable to come up with a name for it, Kate has turned to calling this bow Ungeneric Bow. So far, it hasn't really shown itself to be any different then a normal bow, but Kate keeps it with her anyway.