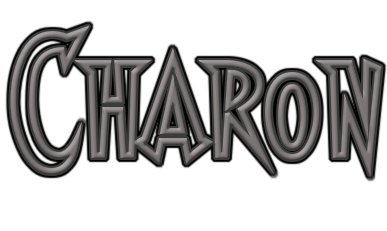 Many consider Charon a myth told by locals to scare hoods, deadbeats and criminals away from Kings Row. Named for the ferryman of the dead, Charon was first sighted in the early nineties, when he was credited with the savage beating of several of Kings Row's most infamous gangsters. Those who have conducted their research will know that behind Charon's mask there was a man pushed over the edge, his life taken away in gunfire and bloodshed. While the rest of Paragon's heroes thwart world domination, Charon remains on the streets; a ghost looking out for those who would be victims.

Charon possesses no superpowers. Instead he relies on his elite skills and abilities, honed through a lifetime of training both in the years before becoming the vigilante Charon and during his crimefighting career ever since.

Charon spent many years training under martial arts masters, vigilantes and superheroes. He is a master of several forms of martial arts and street fighting techniques. He is, of course, most proficient with his trademark quarterstaff, a weapon left at the scene of his fiancée’s murder by her killer. He has spent over twenty years mastering the use of a quarterstaff in combat, and has developed his own unique fighting style which is a mixture of traditional staff fighting techniques – designed to disorient, disarm and neutralise opponents - and less elegant strikes designed to cause as much pain and suffering to his aggressor as possible.

Having trained to the point of physical perfection, Charon has honed his agility and reflexes to near-superhuman levels. In conjunction with his heavily fortified costume he is able to anticipate, avoid, block and absorb blows from opponents of even superhuman strength. Outside of combat, his highly honed agility aids him in stealth operations; Charon is extremely efficient in the art of infiltration and, although he often chooses not to, is capable of sneaking up to opponents and neutralising them without much of a struggle.

Charon’s costume is made from a combination of Kevlar and impervium weave, and as such is nigh-indestructible and protects the wearer from harm, even from superpowered assailants. In addition, Charon wears a utility belt and a chest harness which carries several pieces of equipment that aid him in his crimefighting activities. He carries several small arms for ranged engagements, including throwing knives, caltrops and small grenades of various types. In addition to small explosives, Charon has been known to utilise smoke and flashbang grenades as well as tear gas to disorient and debilitate criminals. Charon also carries a grappling hook for scaling buildings, a medical kit for patching himself up after battles, and a flashlight and locking picking kit for infiltration work.

Robert Ian Black has always been hardened. He was brought up in orphanges; because of his rough unbringing he developed a steely exterior but could still be a kind and caring person, especially to his fiancee Maria.

Following Maria's death, Robert began to experience episodes of psychosis and displayed symptoms of multiple personality disorder, moving backwards and forwards between two personalities; his original personality, and 'Charon', a cold, calculating and efficient vigilante who is interested in nothing except the apprehension of criminals. As Charon, Robert is short, terse and remorseless. The creation of this new personality has been theorised by psychologists stationed with E.L.I.T.E. to be a way of dealing with his grief and in fact may be indicative of full-blown mental illness.

Over time, Robert has ceased to exist; Charon has become his dominant personality. Furthermore, his 'secret' identity became public knowledge during the 1990s and now those who care to do their research will know that Charon is Robert Black. However, this information is of no use to anyone; for all intents and purposes Robert is now Charon, a full-time crimefighter with no life outside of his neverending war against the kind of 'scum' that took his old life away from him. His residences and safehouses are registered under false identities, and knowledge of his past identity is useless; Robert left behind no one through whom enemies could exact revenge. Robert Black no longer exists.

Robert Ian Black was born an orphan. His father died in an automobile accident three months before his birth and his mother during it. He was immediately taken into state care and spent the rest of his childhood being moved from orphanage to orphanage, slowly growing more isolated and alone. He occasionally fell into the care of foster families, none of whom kept him as a member of their family for very long.

A rough childhood soon taught Robert to toughen up. However, Robert avoided the allure of criminal activity, which began to consume the lives of some of his peers. Instead, Robert became an introverted but hardened child, who would disappear into his own head for weeks, sometimes months at a time. Eventually he focused his over-active imagination on an intellectual pursuit after finding a dusty book of Greek myths in the orphanage’s library. He found the ability to disappear through the pages into a fantastical world of gods, titans and monsters incredibly therapeutic, and forgot the dreary, rain-soaked world that existed in Kings Row; the world outside of his window.

At the age of eighteen, Robert graduated from high school and won a scholarship to study at Founders Falls University, where he began an undergraduate degree in classics and ancient mythology. For the first semester of his studies he felt deeply unhappy; he did not fit in with the other students, who were largely from affluent backgrounds, and found it hard to connect to his peers on a social level. Towards the end of his first semester, Robert began seeking jobs on the docks, and was making formal arrangements to drop out of college and go back to the kind of life he knew. Returning to his dormitory one night after working on the docks, Robert literally ran into the student living across the hall from him: Maria DeMarco, the future love of his life.

Robert found it difficult to understand how a woman of her beauty could love him; his cold disposition and hardened face were not features he considered to be attractive. Nevertheless, Maria seemed to love him all the same, and he finally found something he had never had before: a family. Maria introduced him to her father, Salvatore, and convinced Robert to stay in college. For once in his life, Robert had found something akin to happiness. He proposed to Maria in December 1988; their wedding was to be held after their college graduation.

But Maria did not graduate. The following year in the fall of 1989, Salvatore DeMarco came under extreme pressure from a local gangster: Frank LaRusso, alias Knuckles. Knuckles had recently become the apparent victor in the infamous ‘Gish Wars’, and was attempting to secure of all of his turf in The Row. Salvatore was the owner of Underworld Antiques, a shop that was not exactly as it appeared: beneath the dusty watches and candlestick holders was a basement filled with dangerous and powerful magical artefacts, and Knuckles wanted his slice of the pie. Refusing to pay protection money had grave consequences, however; soon Salvatore began to receive death threats, and his car was firebombed in October 1989.

A few weeks later on a fateful night in November, Robert was researching a paper on the afterlife in Greek mythology, and was carrying out extensive reading on Charon, the ferryman of the dead, who took souls across the River Acheron for a price. It was as he was researching the ferryman in FFU’s library that he realised he was late; he was due to walk Maria home from her father’s shop.

He arrived just in time to find Maria locking up the store for the night. After a brief argument they began to walk towards High Park and her father’s somewhat dilapidated apartment. In the darkness, a group of masked assailants were following them, waiting to make their move. As they entered the alleyway that connected High Park to The Gish, their aggressors made their move. Four thugs wearing balaclavas ascended from the shadows, led by an inhuman looking man wearing a spandex body suit of green and yellow, carrying an array of weaponry. Robert fought, but it was his fate to watch as Maria was beaten, sexually assaulted and killed. His attempts to save her were valiant, but in vein; the odds were stacked against him. Robert was knocked unconscious by the lead assassin, who dropped his chosen weapon – a quarterstaff – to the ground; a calling card to show that this had been his work.

Robert woke up in what he immediately assumed was hell; a dank underground cavern with a river flowing in front of him; a dark void beyond the river. Approaching him was a small boat, manned by a grotesquely deformed old man; a man who identified himself as Charon, Ferryman to the Underworld. He handed Robert his rowing staff, and uttered only two words before Robert violently awoke in a hospital bed: ‘Not yet’.

Robert awoke in Crowne Memorial Hospital, violently shaking as he sat up and pulled the wires and needles from his skin. Despite the pleadings of medical staff, he stormed from the hospital and out into the night. Back at the crime scene, he kept to the shadows as two detectives discussed the case, suggesting perhaps that they should visit the Cloud 9 Bar; this seemed like Rabidus’ work, and he was on Knuckles’ payroll. As the detectives walked away to call for a forensics van, Robert slipped into the alleyway and picked up the staff that lay there on the ground.

The Cloud 9 fire has been infamous ever since. Before any law enforcement official could reach Knuckles’ drinking hole, the Cloud 9 had burned to the ground, killing fourteen people. It was later confirmed that several of those killed in the fire had been employees of Frank LaRusso, and that at least two of those who perished in the fire could be linked to the Maria DeMarco crime scene via forensic evidence. The teenaged barman who had been working in the Cloud 9 that night – and the only survivor of the blaze – claimed that the fire had been started by a lone man carrying a stick; a man who had barricaded all of the doors from the outside before throwing a homemade Molotov cocktail through the front window. The identity of the man would never be confirmed by the police – though the latterly formed Bone Squad Task Force would later come to link the fire to Black – Robert himself would know that these were the first lives he would take as Charon in the name of revenge.

Robert disappeared after that, and the few who knew him would never hear from him again.

Charon left Paragon City in the spring of 1990, and travelled the United States. He trained to become an elite combatant under the best and the worst: he bare-knuckle boxed on a number of underground circuits for brief periods, and took part in a great number of street fights on his path to physical perfection. During his time travelling, Charon sought out and trained under some of the world’s greatest heroes and vigilantes, including Staff, Springfist and The Dark Watcher. He returned to Paragon City in 1991 during the summer of a record heat wave. Where Robert Ian Black had once stood, now only Charon remained: a ghost on the streets of the Row.

Upon his return to Paragon City, Charon bought a body suit made of Kevlar and woven imperivum on the black market; an all-black stealth suit that had once belonged to the Urban Commando. Charon made a number of modifications to the suit, including adding grey stripes and crafting a mask that obscured his face; a mask that came to embody his ‘Charon’ personality. 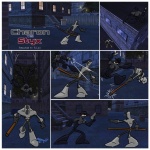 Charon faces off with Styx.