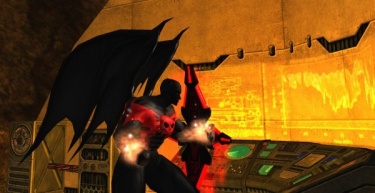 Demon Wing journals his entries at his megacomputer within his Playboy Mansion.

“I am the lord of the wastelands, a modern day man of steel. I gather darkness to please me, and I command you to kneel!!” Dudley rehearsed these words very carefully, trying them out with different tones and inflections. He was a demon now, so he needed to sound like a demon. Who knew sounding like a demon was so hard?

Dudley wasn’t always a demon, oh no, back in the seventies he was just a pimply kid, who liked fast cars, big-breasted starlets and heavy metal. He loved the band KISS, they were his favorites. They looked so special, they printed comic books in their own blood, they beat up Doctor Doom. KISS spat blood, breathed fire, and they levitated their drum kit and shot fiery rockets from their guitars.

He had heard KISS stood for “Knights in Satan’s Service”, and according to some, the band were agents of the devil, placed on Earth to corrupt America’s youth and then bind them into a lifetime of servitude to Satan’s dark purpose.

The thing is, they were right, that’s exactly what KISS was.

Dudley was living proof of this reality. One day when he learned that burning black candles summoned demonic forces, he burned several of them and then played the KISS song “God of Thunder” backwards on his record player. It cast a demonic spell, and Dudley was cast down into the fiery depths of hell. 11666 days later, Dudley returned as a demon, a real living demon.

Wow, KISS was awesome, what other rock band could do all that?

Dudley stood up from his crouched position, and tried the phrase again, “I am the lord of the wastelands!” It didn’t sound impressive though, he still had the voice of a little boy and so he sounded like he was trick or treating.

At least Dudley’s physical appearance was damn intimidating. He stood nearly eight feet tall now, with a massive black frame standing upon two thick cloven feet. He didn’t have a tail like some demons do, but he did possess two giant black wings that extended out from his shoulder blades. He could fold them in or out, and the wingspan was an impressive 15 feet across.

Of course he couldn’t fly yet, he hadn’t learned how to use the wings, but he was positive KISS would grant him that power eventually. In fact, he was convinced KISS had created him, so that he could supplant Satan in hell, and allow KISS to serve as the overlords of Hell and Earth. His reward for his service would be an eternity with 40 beautiful virgins.

“Mmmmmm virgins,” he thought to himself, “…and he began to think of a harem that contained Jacklyn Smith, Cheryl Tiegs and the entire Dallas Cowboys cheerleading squad.

“I need a name,” he said out loud to himself. “A name that people can call me and worship me by. It needs to be a cool name, like ‘Doctor Doom’, or ‘Brainiac’”.

Dudley walked into the alleyway, and with open air, allowed his long black wings to extend out fully. He gazed to his side to admire them, as he practiced flapping them.

‘Demon Wing,” he thought to himself. “I’ll call myself Demon Wing”.

And with that decision Dudley became a legend, at least a legend in his own mind. 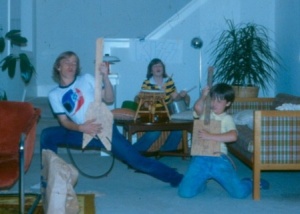 Last known photo of Dudley Winger days before he was committed to the asylum. Dudley is the younger boy kneeling on the floor.

The following is from the files of noted psychiatrist Doctor North and records his observations of Dudley Winger on January 8, 2006…

I observed Dudley for several hours today. He kept muttering “I am the lord of the wasteland” to himself, and would not respond to any external stimulus.

Finally, after several hours of repeating the same phrase and drooling, he stood up, looked from side to side and said, “I need a name. A name that people can call me and worship me by.”

Then Dudley smiled, sat back down and urinated into his adult diaper.

The death of Dudley’s parents 30 years ago has created such psychological trauma, that he has developed a schizophrenic delusion, that only he seems to understand. The man literally lives in his own world.

I will endeavor to look up the phrase: “I am the lord of the wasteland”, and see if it has any literary meaning. 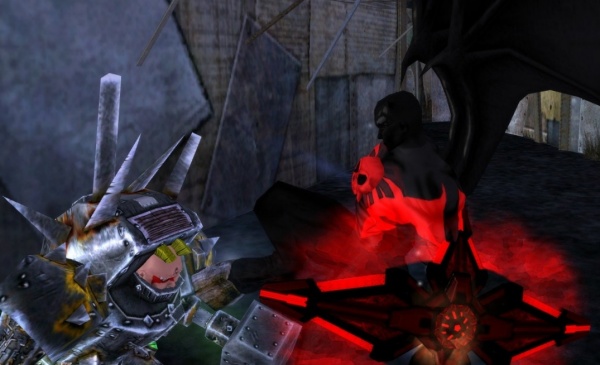 The observations of what goes in Dudley's life by the doctor and the patient, are vastly different. Which one has the better perception of reality?
Retrieved from "https://virtueverse.net/wiki/Demon_Wing/Chapter_1"
Category: Story