Before he merged with Will Aching, Eclipse was a broadly emotionless being who made decisions based on pure logic. Even now, he still has trouble interacting on an emotional level, and is more apt in the company of electronics than organics. Nonetheless, he finds himself steadily drawn in by the passionate nature of humanity, and is getting better at the idea of "feelings"; he certanly feels guilt over his past, a strong desire to make amends, and a sense of loyalty to Calibre's soldiers.

When he's working, Eclipse is an excellent soldier, though he works better with little or no autonomy. His problems with human interaction are mostly mitigated by the presence of a structured, purposed group; generally, he is more comfortable on the job than off.

The entity known as Eclipse Wing is composed of two indivuals - Eclipse, formerly a Nictus working in league with the Council, and William Aching, a young man formerly working for Calibre under the alias "Wing". During a fairly recent incident known as the Subradian Incident - the same in which Martel fused with the Kheldian Halo, and Romeo Salvatore and Drawforce with their more primitive energy symbiotes - Eclipse and Wing were captured and subjected to an experiment initiated by a Rikti cell attempting to create a new Kheldian-like being based on their own energy signature.

The experiment was ultimately interrupted by Calibre's other Agents, and the captives extracted before it could be completed, but many of the processes had already been initiated. Eclipse, his energy-based form altered by the scientists' interference, was forced to merge with Agent Wing. The process did not go as planned, however, causing a sort of feedback loop which prohibited the two entities from coexisting like a normal Warshade. Eclipse, entirely self-interested, would have attempted to destroy Wing, but never had the opportunity. Wing, whose mission as a Calibre operative was to rescue the captives at any cost, willingly gave his body over to the Nictus.

Though he was given little choice when he was "escorted" from the facility by Calibre, Eclipse was shaken by this act of sacrifice. Reacquainted with the concept of altruism, he joined Calibre's ranks as "Eclipse Wing".

Though it is perhaps wishful thinking, Eclipse believes that parts of Agent Wing are still alive in him, and that it may be possible to one day recover his host's shattered psyche. Recently, he took leave of his duties with Calibre to explore Praetoria, hoping to make contact with the Praetorian William Aching and regain something of agent Wing's personality. How much Calibre knows about his plan is unclear, though chances are they are keeping close tabs on him.

Eclipse Wing is a Calibre operative, and has worked with most of their members at some time or another. He remains something of an outsider, however; feeling immense guilt over Agent Wing's sacrifice, he is unable to face Will's comrades easily. This particularly extends to Saxon Valiant, who looked upon Will Aching with his usual big-brotherly perspective, and did indeed harbour some resentment towards the kheldian he died for. 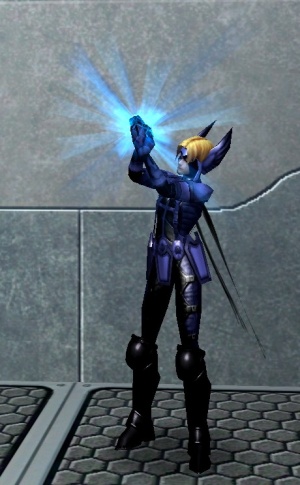 Possibly due to his guilt and empathy issues, Eclipse doesn't function so well when he has to act autonomously. Placed on the spot without orders, he is likely to falter and seek an authority before acting. Likewise, he has trouble interacting with his comrades outside the scope of a mission.

As a kheldian, Eclipse Wing is also vulnerable to Void weaponry and similar powers.