Despite his rather dubious image, Honeytrap is a mage with a powerful gift - shapeshifting. Since childhood, he held a mastery over his own form that could put fully-fledged mages to shame. Not so for other magic, however. Summoning was beyond him, healing made no sense, even the basic principles of elementalism eluded him.

Frustrated, Honey used his one gift to seek magical training wherever he could. No-one, however, could lead him to the understanding he craved - only to greater failures. Embittered, he turned to the life of a conman, letting his pride and ambition drift away in a slow flood of petty crime.

Honey's second chance came from Calibre, a heavily classified organisation concerned not with magic, but global security - and espionage. As they benefit from his wits and his powers, he is able to use their resources to search for the keys to his magic once again.

Despite his youthful appearance and playful manner, Honeytrap is a shockingly mature individual. Having studied everything he could, playing both villain and hero, and experiencing much of humanity's best and worst aspects, he has been shaped into a wise and well-rounded person. He certainly feels the burden of his past misdeeds, but he is past the stage of letting guilt rule his actions - as long as they are truly willing to become something better, he believes, anybody deserves forgiveness.

As one of the earliest Calibre operatives, Honeytrap has settled thoroughly into a sort of "team mum" role, viewing himself as an emotional healer and confidant. He's always concerned with the wellbeing of his teammates, to the point where he can be kind of scary in their defence. He's not above giving orders, pulling rank or using subversive tactics to get his allies what they need, with or without their approval.

Embittered by his inability to grasp "real" magic - and able to slip free from most problems with judicious use of his one gift - Honey has visited most areas of the world that see high levels of metahuman activity. He even spent several years in the Rogue Isles, contemplating exactly how far he would go in order to reach his goal. In truth, however, he never had the stomach for true villainy; after a brief career of wickedness, he reverted to small and petty crimes, concerned only with keeping himself alive.

It was a simple matter for Calibre to bully him into cooperation with the right combination of carrot and stick, but they really didn't need to; Honey was naturally inclined toward more noble goals, and really only needed something to pull him out of his despair. He settled happily into the world of high-stakes espionage, his magic making him an exceptionally useful spy, although he remained unable to master magic for the sake of combat.

Recently Honey requested leave from Calibre operations to explore Praetoria, and went through a brief stint working with the soldiers of the Resistance against Emperor Cole's regime. He was unable to discover a key to his magic, however, and returned to the unit in frustration. This did, however, lead him to begin interacting with other Paragon heroes online. There he eventually came into contact with Cole Craugh, a formally educated witch who became his tutor of sorts, and finally helped him reach the revelation that fully unlocked his powers.

Calibre is the centre of his life right now; he has particuarly strong relationships with Saxon Valiant, whom he frequently bullies into taking breaks, and Swivel, whom he often visits for gaming nights. As is his unusual approach to physical intimacy, he's also sexually active with both men.

Vey recently, Honey has started communicating with other Paragon residents online, and is beginning to develop relationships outside of his team for the first time since his criminal days. 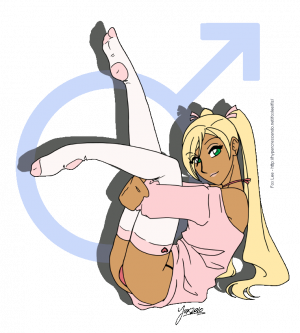 "The whore's the true embodiment
Of everything that's excellent
It leaves no room to shame or bore
And I, My Lords, embody the whore."

Honey has masterful control over his own form, and is able to assume almost any shape that's generally humanoid. He can't mimic other powers, however, unless they are strictly related to physical form or conditioning (for example, he could grow wings or become huge, but not copy a mutant's radiation power). He combines this with a cunning intellect, a talent for acting and his native intuition, to make himself an ideal infiltrator.

Since his "tuition" with Cole, Honey has learned more about the source of his personal arcane power, which is built on themes of conflicting/complimentary and emotional connections. As he describes it, he is a person of such plurality - in terms of ideas, methods, characters, relationships, lovers - that no formal magical theory could possibly work for him. The magic Cole helped him find, therefore, is not a method of spellcasting so much as a method of translating raw arcane energy into kinetic force. It draws power from Honey's myriad emotional connections, pulls it into a stored charge through various "winding" movements mimicking a spiral, and discharges it by sharply breaking the spiral motion.

This new method offers little finesse, but it did give Honey the combat ability he'd previously lacked, being as it is essentially a means of generating small localised explosions. It's not as brutally effective as Saxon or Swivel's attacks, but it's at least as effective as gunfire, and easier to direct. When he has surprise on his side - which he usually does - his powers are distinctly lethal.

Honey carries as much of his Calibre kit as he can get away with alongside any given costume, usually favouring his emergency teleporters, travel aids and targeting HUD if he has to choose. He is frequently equipped with purpose-built devices, usually courtesy of Downplay or Eclipse Wing, if the mission calls for it.

Although he has finally developed combat techniques to go along with his shapeshifting, Honey is still a fairly fragile combatant, and is at a distinct disadvantage if he can't rely on stealt and deception. He also can't alter his clothing when shapeshifting, which can make the spy thing a bit difficult.