There's no good way to call yourself a fallen angel. At the best, it sounds a plea for attention; at the worst, it sounds like a plea for pity. That's why "Kyrie" was always reluctant to talk about her background, from her service in the heavenly choirs to her ultimate rejection of Yahweh and his authority. She described herself simply as an anarchist - one not without order, but without leaders.

However, there was more to her story than she knew. By chance discovered by her brothers, Cottus and Gyges, it seems Kyrie is the hecatonchires Briares - a being created in ancient Greece to destroy the gods themselves. Slumbering for millennia after her last battle, she was appropriated by the hosts of heaven and reborn in her current form, intended never to remember her true purpose.

Kyrie started out as a light-hearted attempt to make a female character who was, unlike the majority of Fox's women, somewhat feminine (that is to say, more along the lines of London Reign than Red Barren). She was mostly an opportunity to use bits of the "Bridal" costume pack, and was also planned to use a black-and-gold colour scheme inspire by Starbuster until her player decided that the red looked better (the black got transferred to Iron Road). The idea of an antitheist angel came out of a desire to use the name "Kyrie" somehow[1], coupled with a desire to express Fox's anti-religious views. The last line of Kyrie's bio is, therefore, a stylised translation of her name.

"Anarchy means 'without leaders', not 'without order'."
- V, V for Vendetta

Once a largely mindless weapon dedicated to a singular goal, Kyrie - like her brothers - has become more and more human with each rebirth. This had quite different results in each case, but to Kyrie - the eldest of the three, and possibly the most powerful - it meant falling more and more into the mindset of "big sister". In her present incarnation, she can't help but think of everybody as her kid sibling. On the up-side, this makes her generally kind and protective, with good judgement; on the down, it means she can be a bit condescending and abrasive to those who don't take well to being called "kid".

Kyrie does not take well to authority, neither having it nor giving it. It's not that she refuses to respect others, or thinks herself better than them, but rather that she gives her respect to nobody unless they have earned it. In turn, she feels that anybody respecting her without reason is foolish. She treats tradition and structure with irreverence at best and outright hatred at worst, and is automatically distrustful of anyone who tries to hold sway over her; when it comes to power, she follows the philosophy that anybody who desires it almost certainly shouldn't have it.

Above all, Kyrie is strongly anti-theism. In all her experience, deities use humanity without conscience or care, and never have mortals' best interests at heart.

"But you know what drives me out
Out of my mind?
"It's whatever makes you see, makes you believe
And forget about the premonition you need to conceive
That the images they sell are illusion and dream
In other words, dishonesty."
- Poets of the Fall, Illusion & Dream

When she first came to Paragon City, Kyrie remembered only the recent portions of her history. She had awoken from her last dormant period to find herself amongst Yahweh's heavenly host, without memories of her past and in a form that could only be called an angel. Believing their tale that she was a newly-created angel, Kyrie served as a faithful soldier of heaven for some hundred years before she began to question the ways of those around her. The relatively uncaring attitude with which they regarded humanity ultimately led to her "fall" - or as it has been phrased, her vague saunter downward[2] - which happened only a few years from the present day.

Exactly who arranged for Kyrie's "capture" is still a mystery. Heaven, in her experience, was equal parts military and bureaucracy, running almost without direction; she never got to meet any of the higher-ups, and certainly not Yahweh himself. Nonetheless, she holds the entirety of the Judeo-Christian heaven in contempt for her misuse, particularly in light of her true purpose.

Very recently, Kyrie ran across her long-lost brother Gyges in Pocket D, who happened to be conversing at the time with Solar Witch, the girlfriend of the third hechatonchires, Cottus. As the girl tried to explain to the pair that they were Reforged's brothers - or sisters, as the case were - her own powers allowed her to detect that Kyrie also was not really an angel. After a measure of argument and misunderstanding, Reforged met with Kyrie and managed to jump-start her memories, resulting in a sort of "reboot" which refreshed her sense of what had gone before.

Formerly a servant of the Judeo-Christian heaven, Kyrie now associates primarily with the vigilantes and anarchists of Skid Row. As a "hero", she has forged contacts mostly in magic-infused Croatoa. Since meeting them by chance in Pocket D, Kyrie became aware of her brothers - Cottus the Striker, now known as the hero Reforged, and Gyges the Big-Limbed, who has established himself in the Etoile as the casually villainous Rough Hex. She considers herself indebted to Reforged's totally-not-girlfriend, Solar Witch, who first noticed her connection to the other hecatonchires, and that she wasn't actually an angel.

During her time in Paragon City, Kyrie has become romantically involved The Rose Paladin. Though they seem at odds over the issue of law, Jos's belief in absolute equality and Kyrie's hatred of corruption actually lead them to a similar place, embodied by the Paladin's remark that we would arrest God if he had the chance. They also share a mutual (if unspoken in Jos's case) appreciation of physical perfection, which Kyrie shamelessly exploited by starting to attend his gym.

More recently, Reforged sacrificed his supernatural powers to become a normal human, and in doing so inadvertently bestowed them upon Cearmaidh, a descendant of whom he was completely unaware. Sensing the change in her brother's state, Kyrie went after the young man, believing he had stolen Cottus' powers. Though it has since been made clear that the transfer was unintentional, and Kyrie has taken the youth under her wing at Troy's request, she still feels a vague disapproval toward Lachlan - essentially, she's angry at him instead of Troy for making what she feels was a stupid choice. 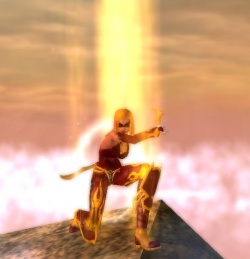 Kyrie and the girls in action

Like her brothers, Kyrie can wreath her immortal body in divine flames, damaging foes and invigorating herself. She can consume energy from living creatures around her to heal her wounds and replenish her energy, or to store and turn against her enemies. She cannot extend her flames very far from her own body, but fortunately, a small radius is usually good enough.

As an abomination, Kyrie is an inherently divine being severed from the need for belief; she does not require worshippers, but neither can she benefit from them. She is effectively immortal; sufficient damage can return her to her dormant state, she cannot be killed (at least as far as anybody knows). As she is specifically a hecatonchires, Kyrie also has the inherent ability to harm even gods with her blows, and is extrememly resistant to divine magic.

Kyrie wields two beautiful swords, which she calls Invidia and Discordia[3]. Like her, the blades have been reborn many times over the ages, originally being a hundred blades wielded by Briares' hundred arms. As such, they are divine in nature, created to cut through even the armour of the gods. Invidia and Discordia appear to be exquisitely-crafted shortswords made of gold - though far harder and more durable than real gold could ever be - with intricate tracery carved over their blades. Kyrie treats them with an almost human level of affection, fondly referring to them by name or as "she".

By design, achieving her intended purpose (slaying a divine being) causes Kyrie to fall into a deep, magical slumber. This is akin to sating a great hunger; the more powerful the being, the longer she is "satisfied". This is perhaps not a common enough occurrence to warrant mention, but it was what allowed her to be hijacked by heaven in the first place.