La Diablesse, or 'Dia' as she is known in the Pocket D, is a succubus. Brought into being from the loins of Lilith ages past, she has spent approximately the last two millennia imprisoned on Earth, as a result of a botched summoning by a young Oranbegan mystic. The mystic, sadly, didn't survive the encounter, although some would say it was the happiest night of his (short) life. Dia discovered that she was essentially shackled to the mortal plane itself, and could never return home without first breaking the geas placed upon her.

Since that time, she's wandered from one budding civilization to another, sowing discord, indulging in debauchery, and so forth. Being around mortals has instilled in her a great desire to feel 'as they feel', as they seem to enjoy their sad short little lives by orders of magnitude more than demons.

Her role in the Rogue Isles seems to be that of a free spirit. Bound to no one, driven by no one, she meddles in whatever affair strikes her fancy. She is most often seen in the Pocket D, as a 'volunteer' bartender and as a socialite. 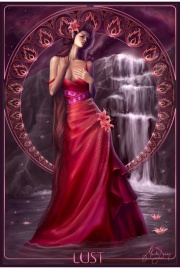 Dia is a newly appointed member of the school's faculty, holding the Chair of Lust. Her students are Sandre and Rizz. She's also currently 'training' Felicia Onyx, as part of a deal she brokered with the girl for a minor shadow-stepping ability.

Because she acquired Sandre from Charisma Calloway, and has had other liasons with the cat burglar and Chair of Greed, Dia regards Charisma as a very close friend, and occasional 'no strings' bed partner. It is true that they do play dominance games with each other, but they're played for the sake of fun, and not power-brokering.

Dia at one time was the Succubus Queen of a group of demonesses calling themselves the Succubi di Diablo. She managed to carve out a lair within the bowels of the Devil's Cape, and sealed it such that entry was only possible via an incantation at specific ley lines within the Isles[1]. Although the furnishings were sparse, the main feature was a stockade with a sacrificial altar, where she and her sister demons brought captured Longbow agents and heroines to be corrupted. She had some success in this regard, as the ranks of the Succubi grew considerably during this period.

Dia was approached by another succubus, the corrupted persona of Black Rattlesnake, as an emissary of Lilith. The direction of the Succubi took a much more morbid and cruel turn since this new demoness joined the cabal. Dia handed the crown to the Rattlesnake and stepped down.

As a succubus, Dia's abilities revolve around lust, desire, and carnal debauchery, as this is her nature, to tempt other beings into activities that bring about their ethical or moral downfall.

And if morbid eroticism wasn't enough, Dia can use the deep-seated dark terrors within the psyches of her victims against them, drawing them into nightmares so real and vivid[6] that those who succumb to them will feel real pain and suffering, as well as cower in place, petrified with fear.

Dia can bring forth hellfire and use it to attack her foes, either by contact or at range. She can also use her magics to periodically intensify the heat of her flames[7], and also use the pain and suffering of nearby mortals to replenish her energies[8].

Dia's other powers and abilities all center around her succubus nature.

Dia feeds on her sadistic conquest of others. As she attacks, her desire to inflict pain, increase sexual frustration, and sow discord will rise, until she reaches a point where her own arousal will exponentially increase her powers of fantasy and control. When this stage is reached, she can trigger a "Hellish Climax[9]" where her power can affect all manner of foes, even those that are normally strong-willed enough to resist her.

Normally Dia flies by means of the soft leathery wings sprouting from her back. However, when in human guise, she still can fly through the air. This appears to be some type of magical or demonic negation of the laws of physics. 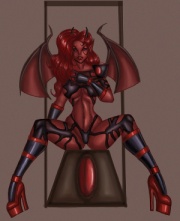 A Queen upon her throne 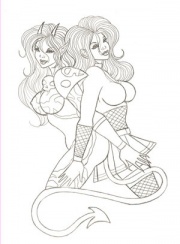 Two sides of the same demoness...

Dia has been approached by a heroic half-demoness, Barbelitha. Dia is amused that she would be sought out as a mentor, and has all sorts of plots and plans in regards to this. Her main quandary is as follows: Since an 'innocent' demoness is such a rare find, what does one do once you've got her in your grasp?

Dia has been rather successful in holding her own against the alien invaders, as long as she keeps moving, or stays on the periphery of any major conflicts. She's no match for multiple attackers, and although she is capable of dominating aliens, it's harder than her usual targets, as their mindset is so different.

Dia was approached by Katarina Zemanova with a bit of a problem - Kat had fallen in love with the succubus-turned-human Tserulyan, but Tseru was only going to be around for a few scant months, unless certain conditions were met. Those two were that Tseru had to find someone to love her unconditionally... and spend a year in Hell in her place, to forestall Tseru's transformation back into a demon. Seeing that the likelihood of Tseru ever finding a lover who would accept this task... Dia took it upon herself, saying that since Kat loved her, then as Kat's mother, Dia would love her too, no questions, no regrets. Upon Dia's enfolding Tseru into a motherly hug... the pact was sealed... and Dia disappeared in a flash of flame and smoke[10].

At times classy and cultured, or times playful and teasing, cruel and sadistic, or even subservient, Dia tends to morph from one persona to the next. It is speculated that her personas are a direct mirror of the subconscious desires of her 'victim', and that her true personality has yet to be determined. As such, she's a chameleon, adapting to fit best with whoever she's with.

It has been speculated that Dia is partial to women as targets. In truth she has no sexual preference whatsoever, but for some odd reason, women are drawn to her more often than men[11]. As a succubus, one would think that she would need men to feed upon, but in her current state, she's able to draw sustenance from the emotional and psychic energy given off by her partners - in this manner, she's a bit of a parasite, albeit usually a pleasurable one. 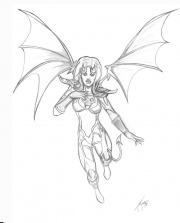 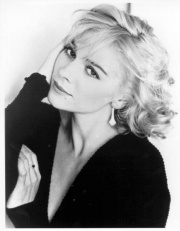 I originally conceived Dia as a player version of the Succubi that appear as Circle of Thorns bosses. She doesn't have all their abilities (and isn't as powerful) but I worked hard on getting her costume to be at least similar. Of course, the first time I took her into the D, she got hit upon, and I decided, hey, she's a succubus, let's run with this.

Thanks to a client-side costume mod, her 'demonic' costume looks VERY close to that of the CoT Succubi. The Tops/Bottoms With Skin "Blast" pattern looks much more blasted, basically.

The Mind/Fire dominator build just leapt out at me as a way a succubus would operate, and she's almost as fun to play as she is to RP with. She's developed a LOT for what was originally supposed to be a Pocket D "village bicycle".

I try to RP La Diablesse as a seductress and a slut, with few if any morals or ethics. She may appear to be 'emotionally' involved with other characters, but her fickle nature makes these connections tenuous at best.

If CoV were made into a live-action movie, Dia would be played by Kim Cattrall, only with red hair.