Born and raised in Paragon City, Ray had a very normal (and boring) life up until his accident. A student at Rhode Island State University, Ray was on his way to his apartment in Talos Island. He was stuck in traffic on a bridge when a super-villain, on the run from authorities, destroyed the bridge's support columns, sending it and everyone trapped on it into the bay below. The impact of hitting the water knocked Ray unconscious.

He awoke in Chiron Medical Center, with sharp pains on the side of his neck. Doctors met with him as he awoke and explained that not only was he underwater for more than an hour before rescue teams pulled him from the wreckage, but that he had some 'odd growths', possibly as a result of the accident. When Ray asked what they meant, they motioned to the sides of his neck, directly where Ray was feeling the pains. Reaching his hands up to his head, Ray felt raised flaps of skin under his ears. 'We've sent your x-rays and various test results to G.I.F.T. and S.E.R.A.P.H.,' the doctor explained, 'But... From what we can tell, they appear to be gills.'

The test results came back days later and verified the doctor's suspicions. The stress of the crash triggered Raymond's latent mutation gene, which manifested as gills and other enhanced abilities. Over the course of the next few months, Ray worked with G.I.F.T. to discover and develop his abilities.

Deciding to put his newfound abilities to good use, Raymond decided to join the ever-growing number of Paragon City's costumed heroes. The Seadevil first appeared on June 22nd, 2006 just off the shores of Talos Island. He started by running tasks for City Hall, arresting small-time Hellions and Skulls.

As his security clearance slowly rose, Seadevil naturally began to tackle more and more difficult tasks for the city. However, it was when a call from Positron went out that Seadevil would reach another turning point in his still-young heroic carrer. Positron needed assistance in foiling a plot by varying villain factions and assembled a task force consisting of Hurricane Jane, Sixty Below, The Freudian Slip, Xanatos, and Seadevil himself. After completing Positron's task, the group soon disbanded, but not before Xanatos himself invited Seadevil to join his supergroup, The Defenders of Paragon

The Mysterious Mr. Z, benefactor of the supergroup United Sanction Society, organized a tournament of champions to take place in the Arenas located in Talos Island and Port Oakes to decide who is the mightiest. Many heroes and villains took part in this battle such as: Justice Prime, Xanatos, Bloodywedd, Dragonberry, Gwendolyn Snow, Ledgerdemain, Mr. Mud, Coyote Storm, Darknesse, Capt. Starfall, Inertial, Umbral Wrath, Humor, Vindicator, The Widowed, Grae Blizzard and many, many more.

Seadevil was initally teamed with The Freudian Slip but wound up competing alongside the Kheldian Ahn Quan against Grae Blizzard and Libertyman and lost a close match.

Seadevil was part of a coalition of heroes who came together to combat The Sadistic Seven in their plot to round up their own army of Shivans and invade Paragon City on Valentine's Day 2007. Both sides battled fiercly in the combat zone known as 'Bloody Bay' but the heroes eventually triumphed and the Seven, along with their various accompliances, were driven back.

Seadevil likes to think of himself as a light-hearted jokester but can come across as a bit of a smart-ass, often ribbing older heroes like The Imperial about various topics. This carries itself over to super-powered conflicts, with Ray often trying to make jokes in the middle of combat. Despite the non-chalant manner he tries to display, Ray still sees himself as a new hero and looks up to the city's signature heroes in the Freedom Phalanx. He even became 'star-struck' when he met Statesman after aiding in taking down Tyrant, who captured Statesman on Praetorian Earth. Statesman himself thanked Seadevil for his assistance, an honor Ray is very proud of and won't hesitate to share with others. 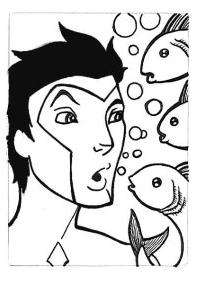 Raymond's mutation has turned him into a fully amphibious life-form, capable of living on the surface and being able to stay beneath the water with no ill effects thanks to gills behind his ears. In addition, his body has mutated to allow him to survive the pressure of the ocean's lower depths with ease. As a side-effect of this, Raymond's physical strength has greatly increased, allowing him to lift (press) near 10 tons and enables him to leap across rooftops with relative ease.

Ray is also able to emit sounds of various wavelengths from his vocal cords, akin to echolocation. With practice, he is now able to utilize this as an offensive weapon; ranging from being able to topple a small car with sonic 'blasts' and bouncing various pitches off an opponent's inner ear to induce sleep or disorientation.

Much like an electric eel, Raymond's body is capable of emitting a strong electrical charge as a means of defense. The upper limit of the charge has yet to be determined. This ability combined with the aforementioned sonics make up the Seadevil's primary means of offense.

Lastly, Seadevil has been known to display a form of telepathy, appearantly limited to sea life. On more than one occassion, Seadevil has summoned some form of sea predator to aid him in a battle.

Offensively, Seadevil seems to rely solely on his mutation to deal with threats. However, his suit has been designed to allow for easier underwater travel, equipped with fins on the forearms and back of his legs and and webbing between the fingers of his gloves

Guru Zombies: During the Halloween season, members of the CoHGuru.com community play as zombified versions of their main characters.

In their native universe, Dr. Vahzilok released a plague that killed and zombified the vast majority of the city's superheroes. While most became minions in the Doctor's zombie army, a few (led by a zombified Psy-Beetle) led a resistance that eventually took down their dimensions Dr. Vahzilok. After this, the resistance managed to, through unknown means, escape to a different reality. After finding this universe still intact, the Zombie Horde renewed it's mission to destroy Dr. Vahzilok, this time before he can subject this universe to horrors they are all to familiar with.