Vagrant Investigations is a small private detective agency located in Kings Row, though it'll handle any case in Paragon City. Magnum Vagrant, the eponymous man who founded the agency, chooses what cases he takes on a case-by-case basis, choosing only those that conform to his own unique sense of morality and ethics. It has a reputation, mostly from Magnum, as being the best P.I. agency in Paragon. They specialize in metahuman and superpowered affairs, which stems from Magnum's experience in the SAS and later, MI-13. After a long absence, Vagrant is back and ready to start up his firm once more. 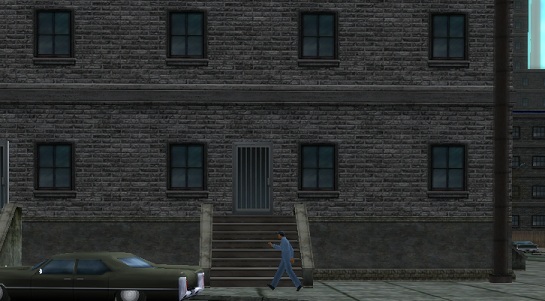 The building where the office is found in the Gish, wedged between two abandoned warehouses. Oddly enough, there doesn't seem to be any gang activity in those warehouses. A pawn shop occupies the first floor, the faded pink neon sign above the entrance occasionally sparking with age. A flight of stairs to the right of the entrance to the pawn shop leads to the office, and a frosted glass panel on the door reads 'Vagrant Investigations', with the open-eye logo sitting underneath. The office itself smells faintly of old whiskey and smoke, and a light haze seems to hang around the office. A broken ceiling fan whirs weakly above the small, cramped room, adding a broken tik tik of sound occasionally accompanied by the faint hiss of an old radiator in the corner. Two, old yellow light bulbs hang low from the ceiling, casting the place in an a slightly eerie yellow glare. Four desks are somehow squeezed into the tiny space, though it's quite obvious that the room is a bit too small for them. Nameplates adorn the personalized desks, reading 'Magnum Vagrant', 'Diz', 'Amelie Girard', and 'Liaya'.

The Pale Professor - A german scientist zombie/skeleton...thing, he is quite knowledgable in the scientific fields.

Sercilus de la Rosa - The Praetorian version of the stillborn twin he never knew he had.

Diz the Goblin - A dimensionally-displaced mage hunter, she provides a stout ally in combat and a supplement to his own detective skills.

Liaya - A technophile djinn who responded to a newspaper ad for a 'computer specialist', she's flighty and temperamental, but her hacking skills can't be questioned.

Athanasius Crey - A magical scholar and swordsman Magnum met at Pocket D, his help has been invaluable in several cases.

Scarlet Visor - A costumed Hero who works out of Kings Row, Magnum picked up her number at a bar and provides her tips when he has a case that's too much for him and Amelie to handle themselves.

Azzy Watanabe - A slightly off-base precog working for Strike Force Zero, her insights have been valuable, though the true value is debatable.

Powell Berkshire - A Paragon Police Department homicide detective attached to the FBSA. He's overworked, underpaid, and unappreciated, but still somehow manages to be an honest man amidst the corruption of the Paragon PD. He and Magnum have been friends since Magnum's first time in Paragon City, and he's always willing to help Magnum out on a case, but he's just as quick to call Magnum for a favor if he stumbles onto something big. He's fully aware of the inadequacy of his position, but isn't against using un-orthodox methods to effect a change despite that.

Vayela Turanski - An unscrupulous journalist working for the Paragon Times, she and Magnum used to have a relationship, but Vayela's lack of morals kept Magnum from pursuing it. She's still willing to help him out on a case, but always in exchange for a favor or a tip on his cases..

Juno Vagrant - One of Magnum's sisters, she's ruthless and cutthroat to an extreme. However, as the representative of Vagrant Industries in Paragon City, she's also an excellent source for information on the business community and the upper-crust. She won't go out of her to help Magnum normally, but she'll still help on occasion, since Magnum is still family, however estranged.

Bek Ni Chan - A small time grifter ex-Skull that claims to have 'gone straight' after serving three years in the Zig for confidence schemes, he still associates pretty well within the Paragon City Underworld, and he's been an invaluable source for tips and information on the various gangs and powers. He usually asks cash for this information, though sometimes he needs help to dig himself out of a hole he'd dug.

Feel free to use any of the NPC contacts listed in your own RP and plots, just contact Magnum if you do, so he could work it into his own plots.

We're usually active sometime after 10 or 11PM EST, and have a plot or two running at all times. If you want to be a client or associate, just mail Magnum in-game, or send him a message on the wiki. VI is a heavy, mature roleplay group where proper grammar is required, as well as thought and creativity. It's a noir-themed group, drawing influences from the classic detectives of fictions - Holmes, Spenser, Marlowe, and a few new ones, like the Dresden Files and the Cal Leandros series. If a heavy-RP environment with a rich theme and fully realized characters sparks your interest, feel free to contact Magnum.

Magnum runs plotlines on a regular basis, with current plotlines chronicled in the Stories page.

Vagrant is back, of a sort, which means he's restarting the group. Contact @Quentra if you're interested.