The Union Supreme was a heroic supergroup on the Virtue Server. The general theme of the group was one of Modern Age heroism with Silver Age sensibility in the vein of Kurt Busiek's Astro City. The Union was an Roleplay intensive supergroup.

A list of former members of importance can be found here. 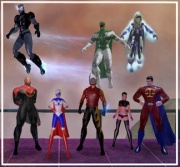 The Instigators
The Union Supreme's origins came about during a crisis.

In January, 2009, the United Nations held a confidential meeting in Martin Hall at Astoria Plaza. The Plaza had been mostly abandoned for years, overrun by criminals and the Banished Pantheon. A security team secured the Hall, but failed to detect the sub-basements where the Council-under the command of Archon Rossi-were manufacturing an anti-alien weapon.

By the time of the meeting, the weapon was nearly ready for deployment. Rossi sent Council troops, both human and robotic - but none tainted by the Nictus - to take over the building and take the UN representatives hostage. The attack did not go undetected.

The City Council and the Mayor authorized a small strike team led by the hero Solairis to rescue the hostages and stop whatever plans the Council hoped to advance. In addition, while the Plaza was cordoned off, a number of other heroes breached the cordon in a variety of ways to assist in whatever way they could.

In the end, Archon Rossi and his troops were defeated in a battle royale.

As the crisis developed, a briefing at the Department of Defense given by Lieutenant Colonel Nathan Fuller (ret.) encouraged the formation of a "Union Supreme" headed up by Solairis, and urged that this Union work under the auspices of the United Nations. Due to the fact that this group would be operating on United States territory for its home base, Fuller felt that the approval of the Joint Chiefs was necessary in order for a Union to become reality.

Shining Centurion spoke with Solairis after the hostages were freed, and the Council routed; Solairis, and close associates of his, spoke with others who were present at the incident.

On January 11, 2009, Solairis, Gods Speed, Liberty Rose, Champion Woman (Champion Girl at the time), Shadespawn, the Egalitarian, Shining Centurion, Steel Brigade, Sonic Zoom, and the Emerald-Sentinel would be officially presented to Paragon City as the Union Supreme. Others would join soon after.

The group would experience many ups and downs in the next few years. At times, the group fractured, only to reform to adapt to the changing world. They dealt with threats from the entity Omnus and its Unbidden, an attempt at Darkening Talos Island by the Banished Pantheon before Mot made its return and forced the sealing of the doors to Dark Astoria, and participated in the Praetorian War.

The events concerning the coming of Battalion and onward remain unchronicled.

While the Union is made up of equals, a structure has been put into place to help prevent the Union from falling into anarchy.

At the top of the hierarchy is the Chairperson, who gives the Union direction and helps determine the actions of the group as a whole. Below the Chairperson are the Protectors and Guardians; the Guardians steer Union task forces against the familiar threats of the city, while the Protectors are often the first to encounter new dangers to Paragon City and the world. Below them are the Sentinels, the veteran members of the Union who can be relied upon to offer assistance against any dangers that threaten. Most of the general membership of the Union are considered Heroes, and each are considered exceptional heroes in their own rights. Finally, the Reservists are made up of the new and inactive heroes in the Union, offering a pool of resources that can be called upon in times of great need. 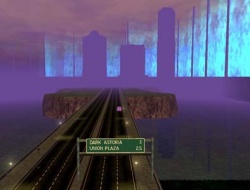 The road to Union Plaza

Union Plaza, formerly Astoria Plaza, is an islet on the southeast side of the Talos Island region in Paragon City. Three buildings make up the base of operations for the Union: Martin Hall, Parker Tower, and the Kent Building.

If you wish to display the character's rank in the Force, add to the CharMod parameters

Use the rank listed in the SG roster.

Also, at the end of your page, you may also add the template {{Union Supreme}}, which offers fast links to other members.

The following 20 pages are in this category, out of 20 total.