Diamondskin started out as my nod to the light-hearted characters of the comic world. He was my homage to The Tick. Now, due to changes in his story, he is following simialr story lines as The Thing as he struggles to fit in a world where he looks like a monster.

The Ever Lovin', Green Eyed
Diamondskin 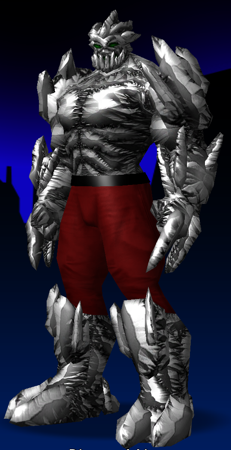 Thinking he was Diamondskin
When he awoke, the tried to remember. He remembered he was Subject #857394.34b, part of the Paragon City Law Enforcement Enhancement Program (PLEEP).  He remembered a magical talisman, one in which he crushed with his bare hand. He remembered a bright flash of light and a lot of pain. From there, the memory is fuzzy. Bright lights, mumbled words, men and women in robes with books, a floating sensation. Now he is here, in this crevice. Is he in a canyon? Where is he? He needs to call his friends...

From that point Diamondskin was rescued by Hyperion Force from the bottom of a rift in Faultline. He learned that after he crushed that talisman, he vanished in a flash of light. They feared he was disintegrated or something worse. That had been a month back. Now he had strangely reappeared in Faultline. Even more, he was changed beyond recognition. He was a human in a red and white jumpsuit with incredible durability and strength. Now he is a hulking block of crystal, even more powerful than before. No longer mentally unstable, Diamondskin finds himself in a monstrous form.

Then, when the Union Supreme went to investigate a Devouring Earth attack at Ginger Yates' lab, the Union found a bewildered Diamondskin was standing near the door and muttering to himself. When the Union addressed Diamondskin, he acted like he was waking up and a bit disoriented. Not sure why he was there to begin with, he asked to join the Union in their efforts to save the scientists once he was caught up on the situation.

The Union and guests were able to save the remaining scientists in the installation. During the rescue mission, an unusual Devouring Earth crystal, one comprised of ruby and acting as a make shift leader, addressed Diamondskin as some kind of traitor. The Ruby told Diamondskin to abandon the humans and return to the Earth.

The results of the tests were shocking. Ginger discovered that Diamondskin was not just cloaked to the Devouring Earth, but in fact he was one of the Devouring Earth! This was a confusing discovery as Diamondskin was human at one point. Then an incident with a magical item had apparently disintegrated him, only for him to return a few months later but in a hulking, crystalline creature. As a matter of fact, Diamondskin remembers "waking up" in Faultline upon his return, but can not remember anything from the time of the "disintegration" to his waking up in Faultline.

Going on the only lead they had, and by a suggestion from Ginger, the Union traveled to Faultline with Diamondskin to investigate the area he "woke up" in Faultline. Upon arriving, they found the general area crawling with Devouring Earth. Combating the creatures, the Union finally comes to strange magical portal deep underground amongst the wreckage of Faultline. It was from this portal that the Devouring Earth have been emerging.

Entering the portal, the team finds themselves in an parallel dimension. With a little investigations of the surrounding area the Union fight off a group of Circle of Thorn of this dimension. These Circle seemed a bit more savage then the Primal counterparts. The Union came across some journals and another portal. With in this portal, the Union find within the dark and disorienting tunnels a person being held captive by a binding ritual from the Circle of Thorns. Freeing the person, they discover that the prisoner is none other then Diamondskin! A human Diamondskin!

Returning to Primal Earth, the Union comb through the notes they acquired from that other dimension. It seems that in that world, the Devouring Earth are the "natural" residents while Humans are the "mindless monsters" bent on killing and replacing the Devouring Earth. Surely a bizarre reversal of roles! When Diamondskin was "disintegrated" by a destroyed magical artifact, he was instead transported to this strange dimension. The accident left him on the verge of death. The Circle of Thorns discovered the dying Diamondskin and placed him in a healing stasis field in order to save his life. Seeing his immense power, the Circle wanted to save Diamondskin so he could join them in their war against the Devouring Earth.

It is not clear what happened after that. Sometime after that last journal entry something happened that lead to "Diamondskin" to wake up in Primal Faultline with no memory of what happened. That part in time still remains a mystery.

What happens to the two Diamondskins is unknown at the moment. Seeing the bewilderment of the Devouring Earth Diamondskin, Doctor Spectro invited him to stay at the Kent Building while things get sorted out. Seeing his life as someone else's, he accepted the invitation until he can figure out what the future holds for him.

Currently, Diamondskin is having some personal troubles. He is coming to terms that he is in actuality a Devouring Earth creature from another dimension imprinted with the mind of the original Primal Earth Diamondskin (now calling himself the Congressionalist). Feeling shunned by normal society, he has a tendency to be very morose and bitter.

Despite his gloomier outlook on life, he never waivers in helping his friends. He is still a true hero, always ready to sacrifice himself if the need arises, even as he comes to terms with being a monster with a human mind.

Diamondskin's diamond body is superhumanly strong since his bodily tissue is vastly more powerful than the organic muscular and skeletal structures of a normal human.

Diamondskin's body is composed of diamond, the hardest natural substance on Earth, his body is virtually invulnerable to conventional physical injury. He has shrugged off rocket launchers, thousands of volts of eletricity, exposure to temperatures as high as several thousand degrees, powerful lasers, Titanium bullets, falls from tremendous heights, and tremendous impact forces without sustaining injury.

In spite of his great durability, it is possible for Diamondskin to be injured or even be destroyed. However if part of his body is injured or broken, he rapidly regenerates the damage. He once regrew a shattered hand in less than an hour. However, if most or all of his body is shattered, he requires outside assistance to gather the shattered pieces before he can reassemble himself.

He possibly has a connection to Hamidon. It is unknown if the Hamidon will have any control over Diamondskin if Hamidon "calls to him."