The Congressionalist started out as Diamondskin, my nod to the light-hearted characters of the comic world. He was my homage to The Tick. For a long while, the world believed he was transformed into a crystal monster, but that turned out to be a doppelganger and Diamondskin renamed himself the Congressionalist as a tribute when he found out Statesman was dead. 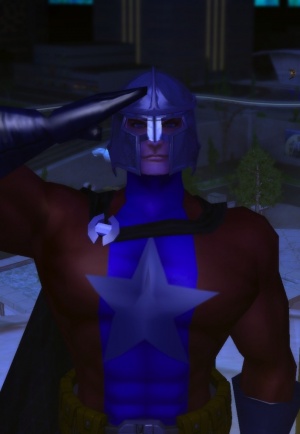 Original PLEEP Diamondskin
Subject #857394.34b was part of the Paragon City Law Enforcement Enhancement Program (PLEEP).  While Paragon City has a good relationship with it's hero community, it was felt by government officials that a more loyal and government controlled group of Metahumans should be acquired.  So PLEEP recruited and developed the scientists and candidates.

Subject #857394.34b was an early, somewhat, successful implementation of PLEEP.  He had high strength and an extreme durability.  He was given the code name of Diamondskin.

Unfortunately, Diamondskin was subject to some unfortunate side effects of the early PLEEP process.  Diamondskin can not remember any of his former identity and he developed rather extreme personality quirks.  With his personality wiped clean, he mentally absorbed the PLEEP manifest and programing directive.  Without an associated personality to give balance and judgment to the PLEEP material, he became a bit extreme and simplistic to his approach of Law Enforcement.

As a result, he became quite annoying. The PLEEP staff could not tolerate his simple single-minded dedication of Law Enforcement.  If it was not for his optimistic, friendly, and very naive nature, Diamondskin would have been classified as an unstable person.  As it was, he was annoying and lacked any real way to interact with society outside of a Metahuman Law Enforcer.  Ultimately, Diamondskin was considered a failure and too great a potential menace.  Diamondskin was put in cyro-stasis.

Then the Rikti Invasion happened.  With the need for more heroes in the aftermath of the Invasion, a technician working on his own, released Diamondskin.  Seeing his beloved Paragon City in danger, he rushed out to take on Evil and Wrong-doing-ness! 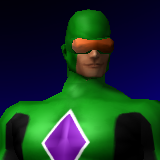 But the alternate Diamondskin, claiming to come from Earth 9682 ("Pinnacle"), was determined to get to his proper home. With the aid of other Hyperion Force members, they proceeded to build the Transdimensional Projector. Unlike other alternate dimension, this "Pinnacle" is a symbiotic dimension. Symbiotic dimensions "lie close" to each other that they share many aspects of history and people, only small variations exist between the dimensions. Because of the dimension's "close" proximity, it makes it very difficult to identify and travel to. The Transdimensional Projector was going to "slice" that dimensional wall and allow both Diamondskins to trade places and repair the dimensional flux that cause the problem to start with.

Finally, Pinnacle Diamondskin was able to isolate Virtue Diamondskin to a cluster, or String, of dimensions. Unfortunately, some form of "static" prevented any clearer search. Investigating the source of this static, Hyperion Force discovered some form of mechanism creating the interference. Also, a minor villain from the Virtueverse, Thermite, was found guarding the machine with a small group of troopers.

Dealing with Thermite and the machine, Hyperion Force continued to follow leads that lead to the base of The Traveler. It was revealed that The Traveler planed, through the use of newly discovered technology and studying the Virtue Diamondskin's unique ability to adapt to dimensional realities, to merge a String of dimensions together. The act of merging dimensions would release an immense ammount of unknown energies that The Traveler was interested in harvesting. Some of the dimensions in this String was Pinnacle as well as Virtue.

Able to rescue Virtue Diamondskin, Hyperion Force fought with the Entropy Legion villains, the Union of Dire Ambition troops, The Traveler, and the machine that was merging the dimensions. In an epic battle, Hyperion Force was able to shut down the machine. Sadly, some dimension were merged durning the battle. The native home of Diamondbrute was one of those dimensions, as well as many others that Hyperion Force had visited on their journey. The Pinnacle Diamondskin returned home to asses the damage and to search for a possible way to reverse what the Traveler had done. The Virtue Diamondskin was left in his home dimension of Virtue, unaware that he was even gone, thinking he was in Cleveland most of the time.

Men and Monsters and Imprisonment

Recently, due to yet another mishap with a mystical artifact, Diamondskin found himself shunted to another dimension. When he returned to the Virtueverse, a few weeks later, he was found changed in many ways. His body had fully taken on the crystalline structure that had been introduced into his cells. He also appeared to be cured of his mental delusions. Now, more powerful then ever, Diamondskin tries to find his place in a world where he finds himself looking more like a monster than a superhero.

Currently, the Congressionalist is trying to catch up on the time he was in stasis, he is finding it hard to keep up with the changes. Galaxy City is destroyed, Statesman and Sister Psyche dead, he is feeling overwhelmed at the moment. While mostly cured of his mental instabilities, he find his time away very hard to deal with.

Despite his odd outlook on life, he never waivers in helping his friends. He is still a true hero, always ready to sacrifice himself if the need arises.

Thanks to cellular augmentation through unknown processes, but involving some form of crystalline replacement or augmentation in his cellular structure, the Congressionalist possesses immense superhuman physical strength that originally enabled him to match individuals such as the Statesman, but recently greatly increased after performing rigorous prolonged weight-lifting training.

The Congressionalist's muscles produce considerably less fatigue toxins than the muscles of an ordinary human, granting him superhuman levels of stamina.

A side effect of the crystalline structures in his cells, the crystals appear to have a unique frequency signature that is adaptable to the dimensional frequency he occupies. In other words, he "becomes" a native of that dimension, able to survive as one born of that reality. This does not grant him any additional powers, but allows him basic survival as if he was born there. The extremes of this side-effect power, for example if the dimension was pure plasma, is unknown.

He still has lingering issues with his grip on reality. The stress of trying to be the hero Statesman was is also wearing on him.