Radium Blight is my nod to the tragic figure who decides to strike out against everyone. In some ways, he is pretty simple: angry at the world and trigger happy.

Can someone be a born loser? Are there people, who despite how much they struggle and work, they will never be able to come out ahead? If there is, Philip Hornsby must certainly be one of these unfortunate people.

Born in the Eastgate section of Paragon City, RI, Philip’s family had to flee their home when the event known as "the Hollowing" happened. Philip had also lost some family, like his grandparents, during the Rikti Invasion, as many of them lived in White Plains and Baumton, all of which are now Rikti War devastated zones.

With Eastgate sealed off, the family split up. Philip’s sister, Ginny, moved to Overbrook while his parents moved to Astoria. Sadly, having very little money, Philip could only afford a modest apartment in King’s Row. But he had a promising job at Crey and things could go well if he could get a break or two.

Sadly, those breaks were not to fall for Philip on the positive side.

Ginny died when the criminal Faultline destroyed half of Overbrook. His parents were victims of the dark magic tragedy that turned Astoria into Dark Astoria. Philip’s other brother, Derik, died from a Vahzilok attack in Perez Park.

From Bad to Worse

With all the tragedy that he has endured, Philip was about receive a true blow to his life.

While only a simple lab tech at a Crey subsidiary, he was popular with his supervisors and was a hard worker. While everyone acknowledged, even Philip himself, that he was not going to be the brains behind any new discover, everyone felt he was a solid and hardworking employee. He was the kind of guy that was a “backbone” to an organization.

Because his supervisor liked Philip so much, he let him in on one of Crey’s newest experiment, the Isotopic Accelerator. Sadly, this would be the last project that he, and the rest of his friends, would be part of. It is not known what went wrong, because of the devastation to the lab, but what is known is that Philip walked out of that lab...sorta.

Whatever the Isotopic Accelerator was suppose to do, it ended up transforming Philip Hornsby into a creature of highly radioactive material. To contain his rampant radiation surge and massive toxicity, Philip had to be contained within a containment suit. Without his suit, his body would stockpile decay that could blow Paragon City into a crater.

How, his family lost, his friends gone, locked in a containment suit, and not even human anymore, Philip’s mind snapped. Calling himself Radium Blight, because of his body’s most prominent energy signature matching the decay rate of isotope Radium 226. Now Radium Blight is going to strike back at the world that has struck him so many time.

After Radium Blight started his new life, he was taken in by a group of villains called Entropy Legion, led by the enigmatic Skelros. They modified his initial containment suit to be much more flexible and to blend in with normal society better. Seeing the potential of the Legion, Radium Blight took control of the Legion, banishing Skelros from its ranks. His next move was to make an alliance with The Union of Dire Ambition, which Skelros had a conflict with. Seeing a resource out of their enemy's hands, The Union accepted Entropy Legion under its protection.

Because of the benefits involved, Radium Blight has no intention of breaking away from the Union of Dire Ambition as of yet.

Radium Blight is a bitter and angry man. Nothing in his life had gone right. He paid his taxes, worked hard, did some minor community work, but still life seemed to smack him down. After the accident that transformed him into a monster, he looked at life differently. Now that he was not human, he is angry, hot-tempered, and uncaring. He is now all the things he was not before, and this time, things will be different. 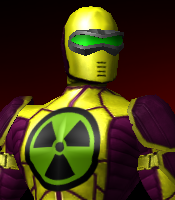 Is a capable technician. While not able to go out and make discoveries on his own, he can perform many mechanical and scientific tasks. He is dependent on having access to formulas and notes in order to perform many tasks that are not part of the basic knowledge of the mainstream scientific community.

He has become very knowledgeable about radiation and its effects on the human body as well as inanimate objects.

Radium Blight emits nuclear radiation at all times and can only remain in the presence of other individuals for short periods of time if he's wearing his null-radiation body harness. Also, absorbing large quantities of radiation can affect his emotional state.

Radium Blight has been permanently transformed into a living energy field. He can't return to human form.