The concept for Betty Highside[1] came about from my love of sport motorcycling and sport-touring. She's the embodiment of the thrillseeker crotch-rocket 'squid' persona that I cannot in good conscience allow to surface when I'm riding, as squidly behavior gets you hurt in the Real World.

Betty "Highside" Harris is a minor villain known for high-speed hijinks, such as BASE jumping off of buildings in Port Oakes or riding her motorcycle up or down the side of the Golden Giza Casino in St. Martial. Her philosophy isn't that of most villains, in that she's out for more power or more riches or more... whatever. She just wants to be left alone, un-hassled by the Man, allowed to live life on her terms. As such, she's rather uncomfortable associating with most villains; they 'creep her out'. Influences are Bohdi from "Point Break", Dominic from "The Fast and The Furious", the MotoGP racer Valentino Rossi, and lastly, the totally awesome Tim "Pashnit" Mayhew.

Personality-wise, Betty's rather flippant and disrespectful of authority, except where that authority is earned. She also tends to be flamboyant when it comes to riding, or partying. On the job though, she's all business; she takes her teammates into account, and tries to plan "jobs" so that it goes off quickly, quietly, and without undue bloodshed or damage to property. Occasionally she'll cut loose where the whole POINT is to attract attention and then thumb her nose at the police that are dispatched to the scene[2].

However, this outward flamboyance hides a very insecure and hurt young woman. Disowned by her father after she was caught burglarizing small shops to fund her motorcycling activities, she's come to rely on herself as the only person that can be trusted. Her experiences with Wild Childs have reinforced this.

Betty usually loads the magazines with dum-dum rounds of the appropriate calibers, and tends to aim for the sternum or solar plexus, so as to knock targets unconscious instead of killing them. She's also swapped out the usual napalm mixture for a fast-burning alcohol mix. It burns bright, and hot, but evaporates quickly, resulting in only minor burns (but it sure freaks people out a lot!)

As such, no fatalities have been recorded in any engagement with her. At least with anyone who reports such things.

UPDATE: As she's seen firsthand what happens when the truly vicious and disturbed go free, Betty has begun to use killing force on some of her jobs. Again, she hates to kill, but sometimes... it's better than the alternative.

As a target is damaged, Betty looks for ways to 'put it down quicker'[3]. Most corruptors look to make a victim's demise as painful and gory as possible. Betty goes for the mercy shot.

With the disappearance of Sayuka, the Crimson Dawn is no longer a safe place for Betty. So instead she's arranged a cover identity as a college student at Aeon Univeristy.

An avid thrillseeker, Betty keeps herself in shape for the next 'Big Stunt'. As such, she's quite fit. She's usually seen in full motorcycle leathers and a helmet, the pink color matching that of her 2001 Suzuki GSX1300R "Hayabusa"[4]. The motorcycle's top speed is approximately 215MPH. It has been modified with a kinetic shield to protect the bodywork in the event of a crash. It is also fitted with a Mr Turbo intercooled turbocharger, and a small 'jump boost' device positioned just forward of the bike's center of mass. This allows her to leap over small obstacles without the use of a ramp. 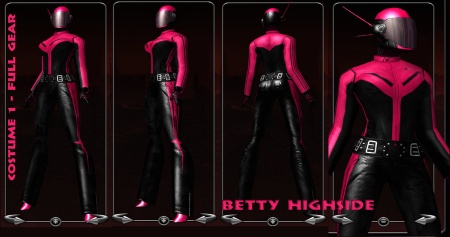 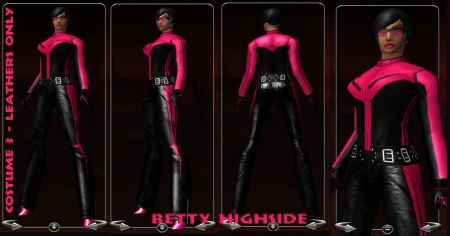 This is Betty with her helmet off, but still in her leathers. You might see her riding like this, but not very often. 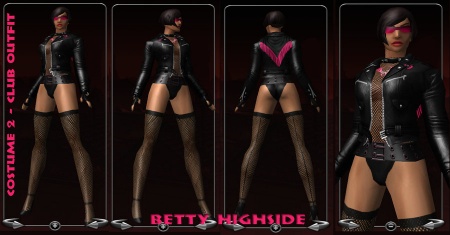 And lastly, there are times when you gotta leave the heavy thick protective stuff behind, and show up in something a bit more friendly.

Call her 'goth' at your peril.

Betty has had a bit part or two in a few Virtue storylines. I've yet to write up a full story for her though.

Betty was one of hundreds of villains deposited in Paragon during the chaos, but instead of killing or burning or 'blowing shit up', she pretty much just rode around at high speed making cops spill their coffee.

She did commit a break-in at the Steel Canyon Icon, taking a small prototype called a Polyphasic Closet. Basically this device is a "pocket dimension-based" storage unit that allows her to stow her bike and riding gear on her person instead of having to find a place to park it and/or lock it all up.

Once she escaped with the device, she led cops (and soldiers) on a merry chase through Paragon, culminating in Atlas when she lowsided her motorcycle and was arrested. However, soon after she was tried and sentenced on a plethora of lower 'scofflaw' charges, she inexplicably vanished during transport to the Zig, out of a locked SWAT van while it was in motion.

There's this zone, where torque and traction and cornering forces are all balanced. One little nudge, and bad things happen, but the longer I stay there, the more turned on I get.

You want to get in my pants? Cross the finish line first, or ride bitch.[5]

I hate having to be the bad girl, shooting people, roughing them up, et cetera. I just like riding on my terms. Is that so wrong?

I never met a cop I couldn't smoke in ten miles.

Do I LOOK like a paddock girl to you?[6]

Yeah, I prefer girls to guys. Guys let their balls do the thinking. Girls are cool with enjoying the ride, no matter who's got their gloves on the bars.

There's a point where you just gotta leave the whole 'civilization' thing in the dust, and just dance with the world. Not many places you can do that anymore.

Some say the Hayabusa is too much bike. It's like straddling a fucking rocket. You gotta get real intimate with the throttle, the brakes, the suspension... you don't think, you FEEL how it's all working. I make sweet love to that machine every time I swing my legs over.

Cagers[7] just don't get it. They ride around in those metal coffins, all insulated from the world. When you're screwing it on in the corners with your knee down on the pavement, it's a dance. You can't dance in a car. All you can do is bob your head to the radio.

Betty has been known to do 'road trips' when under stress or when needing time to get her head straight. She has toured many locations in the US, including the Sierra Nevadas and the California Gold Country, the Pacific Coast, and several locations around the Puget Sound. However, her favorite part of the country is the deserts of southern Utah and northern Arizona. She came to her decision to turn 'vigilante' while participating in a Navajo ceremony known as the Blessing Way.

These are all songs that I like to have playing when Betty's doing her thing. If I were ever to do a demo movie of her... hehe...

Heard about a rumor concerning Betty Highside? Edit this section, and add it.

((Not so much a rumor as a song I thought you should listen to, I read page and like the character, a song that would go fuckin' great with her is "Welcome to the Jungle" by Guns and Roses, seriously like to a T.)) Silent Sniper 23:56, 1 November 2011 (CDT)

"Now I Need a Smoke"