Would a child with no human contact grow up with an appreciation of the values we consider to make us human? Would an animal which gained human intelligence still function merely on instinct - or does that intelligence carry with it the inherent burden of morality?

The woman officially named "Amanda Caine" after being adopted into the Supergroup Project Corona doesn't much care, though its administrators find her a fascinating case study. Born in the Amazon as what would seem to be a normal member of her species, the cause of Caiman's mutation into humanoid form is still unknown. It is certain, however, that while she lacks some of the finer points of human behaviour (such as not eating everything that doesn't move), she developed a strong enough moral calibre on her own to seek hero status in Paragon city, finding along the way two friends to whom she is intensely devoted.

Black Caiman, generally known simply as "Caiman" to her friends, is a Martial Arts/Invulnerability Scrapper played by Fox Lee One of the original members of the Supergroup Project Corona, she was designed to work as part of a team based on the Leadership power pool, but also as an in-depth role-playing character. The rest of her character developed alongside Project Corona; she was started at the same time as two other characters, with the goal that they whould always team together, and share the Leadership power pool to represent effective teamwork and training. Thus, the Project Corona concept resulted.

Since she was originally made due to the need to have a character on a particular server (she was only moved to Virtue later), Black Caiman's appearance was originally somewhat random, and inspired her concept and build rather than the reverse. Her green hair happened to be reminiscent of an alligator, which led to the reptile chest texture and scars. The tech Crey boots, combination with long legs, gave the appearance of disproportionately large feet, and in turn the idea that she should be somebody who fights with her legs. Thus, she became a martial-artist gator.

Caiman has a fairly simply personality, and is still a bit like an animal in any ways. It's not that she isn't intelligent - she's at least as cogent as the average person, probably moreso - but she has little room in her life for in-depth thinking and philosophy. She does has a strong sense of morality, however - and, though it is somewhat unusual by virtue of developing without human influence, she is generally a good and upstanding citizen. Except for the appetite.

Caiman's history before meeting Bec and Therm is largely unknown, due in no small part to her memory being vague on the subject - her mind developed into that of a human only towards the end of her mutation. Indeed, the cause of said mutation is still unknown, though Project Corona's researchers would dearly like to know. What is known is that she wandered somewhat aimlessly for some time and distance before hearing talk of Paragon City,at which point she decided to make it her destination.

Caiman was one of the original members of the Supergroup Project Corona, and has since taken up residence at their base in the absence of wanting her own house or apartment. Now a Field Trainer who instructs new recruits for the group, Caiman is viewed by her unlikely colleagues as a valuable asset (and coincidentally, a very interesting study case).

Caiman shares a close friendship with two younger (but no less experienced) Project Corona members, Bec Querel and Thermal "Therm" Sink. Though the details of how they came to be travelling companions is a little vague, it seems that Caiman 'adopted' them as part of her development into a human consciousness. This unspoken bond makes her tremendously protective of Bec and Therm (though she understands enough to not be overbearing on them), and she is rarely seen without them. As a general rule, they do not set out on missions except in each others' company. 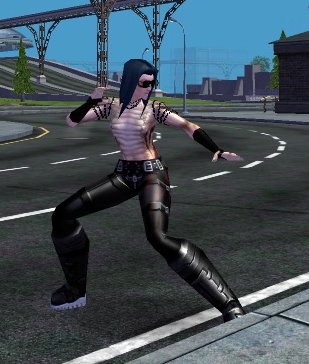 "Caiman! Tell me you're not eating the computer!"

Caiman is immensely strong, thanks to her mutated genes, and also immensely durable. She is immune to every poison and toxin with which she has been tested, and can consume and digest almost any (tests are yet to reveal any exceptions) matter with no ill effects. In addition, her teeth can shear through almost any substance.

Caiman practices what can be loosely referred to as "martial arts", though in truth it's no more than a series of attacks which utilise her very-oversized feet. In addition, she has received training from Project Corona dealing with team cooperation and tactics (though in her case, this is less due to tactical thining and more to instinct and adaptability).

With the exception of occasional specific tools acquired from Project Corona's technological department (such as travel devices), Black Caiman does not use any equipment.

In addition to her simple-mindedness, Caiman has some minor weaknesses relating to her mixed heritage. As a reptilian creature, she is cold-blooded and moves sluggishly unless she has the chance to warm herself up. Also, due to her unique metabolism, she must constantly consume tremendous amounts of food in order to sustain herself.

A subject which has caused some degree of distress to Caiman's teammates is her eating habits. Specifically, the fact that Caiman feels no reluctance to eat anything and everything which is no longer alive. While she's too moral to kill a sentient creature for food, she does hold the viewpoint that after its death, everything is meat - and as such, can often be found after a mission making short work of whatever corpses might have resulted. She says Warriors taste best, since they usually don't have any freaky magic or drugs in their systems, but has eaten everything up to and including Kurse's legs.