Caer was created, intially on the i12 Test server, for three major reasons: firstly, his player really liked the new "Arctic" costume pattern; two, his player had just recently upgraded her graphics card, and had never before been able to play a character with shiny or reflective bits; and three, his player thought the name "Clarion" was gorgeous, and wanted to do something with it even though it was taken.

When he was initially created, he had virtually no background at all. Or any foreground, for that matter. He just was. The information here was formed during play, based on his interactions with his two (very affectionate) teammates, and the desire to differentiate him from Laurel, a similar character played by the same character.

Caer was rebooted after the Freedom launch, because aside from Empathy Defenders do nothing Fox wants that Corruptors don't do better. It's not totally appropriate for his personality, but hey - it's just a word. As an unexpectedly huge bonus, he was able to trade his original name, "Clarion Caer", for just "Caer". Fox was extremely pleased.

Caer is optimistic, idealistic, and possessed with seemingly boundless enthusiasm. Not unlike Project Corona Prefect Laurel, he has high personal standards, and embraces the concept of heroism with just a touch of naivete. Engaging him in conversation reveals that he does think more deeply about it, though - he has a stronger grasp of psychology than might be expected, and has been heard to comment that he thinks most villains are just afraid.

Like most teenage boys, Caer is slightly socially awkward, prticularly around girls. He makes up for this with unquenchable optimism; his spirits can never be kept down for long. He does also have a slight inferiority complex - he's well aware that he brushes shoulders with those far above his own level, with a tremendous variety of unnatural powers. Feeling that he's been living in somebody else's story for far too long, Caer wants to make a name for himself, to prove himself to... well... everybody.

Caer was born in Wales, but - to the relief of his teammates - his family migrated to America earlier than he can remember, and thus he has little in the way of an accent. He does take a degree of pride in his ancestry, however, and has made a point of researching his native culture.

Growing up in Paragon City - Founders' Falls, to be exact - Caer spent his boyhood as a normal person in the midst of true superheroes. He developed a strong (if predictable) desire to walk in such footsteps himself, and pinned his hopes on the one sport in which he excelled - archery. Unfortunately, he was still far from hero calibre, and despite multiple applications to Freedom Corp, was not accepted as a member.

Caer was accepted into Project Corona some years before he acquired his magical abilities, under the "Prodigy" program, which sought to gather promising "natural" individuals and train them to a level matching metahumans. The program was quite serious, requiring legal contracts and personal commitments on behalf of the individual in order to discourage those who would not treat the training, expensive and dangerous as it was, with the gravity it deserved. Caer, of course, treated it with the utmost respect, but was still ultimately lacking as a hero - it was broadly felt that if he was ever allowed to do field training, he'd probably get himself killed.

Caer's "moment" finally came when he - frustrated by the entire situation - attempted to take on some freelance work. It was a mission of only minor importance - recovering a low-powered magical item stolen from Magi by a local group of Hellions. In all likelihood, Caer got himself captured and would have been in a great deal of trouble - but, somewhere in the confusion, it seems somebody tried to activate the stolen item's powers without understanding it, resulting in an arcane "shockwave" of sorts.

For reasons beyond his understanding - and still under investigation by Magi, who occasionally commandeer him for ongoing tests - Caer somehow absorbed the magical fallout that resulted. For a brief time, the boy manifesting immensely powerful command of various effects relating to ice and cold, utterly destroying the Hellions and most of the building they were in. The effect proved to be too much for the boy's body to handle, and he passed out soon afterward, recovered from the wreckage later by fellow Project Corona members.

When he awoke, the power had mostly left him - his current level of magical ability isn't even vaguely close to what he experienced that day. However, it does seem to be growing slowly stronger, giving Magi a lot to think about - they are still unsure of the exact nature of the artefact, which seems to have lost all magical properties in the incident.

Caer, of course, is thrilled. He's finally a hero.

Caer is member of the youth-focused supergroup, Project Corona. He is also kept under the watchful eye of Magi; they like to check up on him after what happened.

Caer's usual teammates are ex-Warrior Emblazoned and musical savant Quarter Note. He quickly developed a strong rapport with both of these individuals, though they occasionally get on his nerves by belabouring just how cute he is. They have also both shown romantic (or at least physical) interest in him, to which he is somewhat unsure how to respond. So far, he has spent most of his time being embarrassed and quiet; however, due to his slight inferiority complex, he occasionally rises to the challenge and shoots innuendo right back at them, just to prove that he can. As yet, he's not quite sure how he feels about following through.

He also has a somewhat shy, fanboyish admiration of Project Corona's more prominent members, especially the "Vanguard" members. It's not as if he isn't free to talk to them, but he mosly feels he ought to keep out of their way, and usually just regards them with quiet awe. 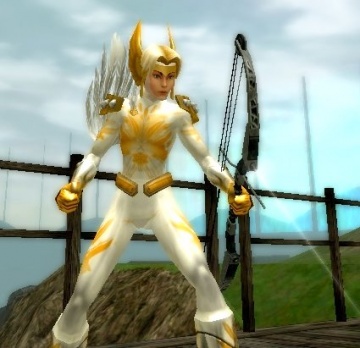 Despite their unexpected origin, Caer's powers are fairly straightforward: he can manipulate cold. This can mean a number of things, from chilling opponents and slowing their movement to using ice or frost to absorb energy and prevent damage. Caer's magic centres around the defensive, protecting his allies or weakening his enemies whilst his bow provides offensive power. In addition to his magical abilities, Caer's archery training is coming along quite nicely. He's no prodigy, despite his enthusiasm, but he has a solid ability with the weapon and he's getting better.

Caer has a number of more minor talents and abilities, but the only one that would be considered unusual in Paragon City is that he can speak Gaelic. Or, that is to say, the particular Welsh dialect of Gaelic spoken by his parents and extended family. He's quite thoroughly bilingual, though he does make comments to the effect of "we don't have too many consonants, you have too many vowels!".

Caer makes regular use of his Police Band radio (given to him by the Kings Row PPD), his raptor pack (on loan from Project Corona), a jump-pack (awarded as part of the Prodigy program), his base teleporter (likewise) and his Pocket D VIP card (a gift from his parents). Of course, his most important piece of equipment is a very well-made compound bow, the sort one might use for competition shooting or hunting (though Caer himself has no interest in bloodsports). This comes with a variety of specialised arrows, including explosives and incendiary devices, which were never an idea of Caer's but were happily provided by Project Corona's R&D department.

Caer also carries the artefact he "recovered" for Magi, which he was permitted to take for safekeeping when it was confirmed to have lost all its powers. Although it seems by all accounts to do absolutely nothing now, Caer still secretly likes to think it has some power, and has named it "Rhynnu" (meaning "to shiver"). He wears it as a cloak fastener.

Caer is naive, passionate and rather easily manipulated. He tries his best to be sensible, but there's no denying that he craves respect and wants badly to prove himself to those around him. In short, it's easy to get him to act without thinking.

While Caer's magic gives him some offensive power, and some abilities which protect his teammates, he has little power to protect himself. Beyond the magic and the bow, he's very much an ordinary human, and quite breakable.