Hyperbole is a Fire/Fire Blaster played by Fox Lee. He was salvaged from an older character when Fox picked up the new name on the Virtue Name Watch Thread, and realised it couldn't be more perfect for her bratty hyperactive speedster. His supergroup/regular team had already fallen apart, so it was a much welcomed chance to start fresh with a design Fox really didn't want to let go of.

Hype's nature is as obvious and straightforward as his powers; he is a brat. He's impatient, short-tempered, opinionated, disrespectful, selfish and vain, and those are his more endearing qualities. He's also somewhat dense and easily manipulated. Presumably Hyperbole is a good person, since he wants to be a hero, but as it stands, even his allies sometimes find it hard to appreciate him.

Hype is also somewhat oversexed, possibly due to being... well... a teenaged boy. Despite his rather camp appearance, though, he isn't gay; he isn't even bi. In fact, he has a distinct taste for older women and large endowments, and while he actively seeks partners, he has no interest in being "on top", so to speak. This fixation is probably due his lacking actual parents. He has been know to mercilessly mock people he believes to be less experienced than himself.

Like so many of Project Corona's members, Hyperbole was an unhappy child who lost his parents at a young age. Unlike the majority, however, young Bowie never found himself without a home or family - his parents had been successful professionals, who left more than enough money to see that their children were cared for. However, as the last of their children - five years younger than his brother Rhys and far younger than his two half-sisters - Bowie was by far the most affected by their loss.

A naturally bright child, Bowie turned his intellect to making trouble after his parents' death, becoming contrary and rebellious simply for the sake of attention. When his mutant ability to control fire emerged during high school, it led him to a local Outcast cell, and a string of petty crimes which would have landed him in juvenile detention. It was his brother who interceded on his behalf, begging Project Corona to take the boy under its wing and try to set him straight.

Hyperbole is a member of the youth supergroup Project Corona, and spends most of his patrol time teaming with other students or instructors. He has an unabashed interest in the institution's principal, Madison Shepherd, though he has otherwise has been known to bemoan the lack of "sexy" women on campus. He has a point - well, inasmuch as "sexy" means "cougar".

Hype also has a tenuous affiliation with another of Project Corona's young rebels, Prior. Being of similar age, the boys both sought to join the outcasts at about the same time - though Hype's brother saved him from the arrest that eventually befell his electrical counterpart. Prior is understandably bitter about this. 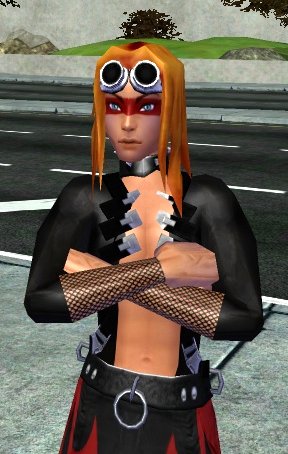 Little-known fact: Hype can also be viewed from the front

Like so many mutant powers, the core of Hype's fire manipulation comes down to energy; in short, he moves particles quickly enough to ignite them. This is the same reason he's able to increase his movement speed so dramatically when he concentrates on it. This power has little to no application outside of his own body and the "unattended" matter around him, however, so he's limited to indirect means; he can set you on fire or cause an explosion near you, but he can't hurl you around or augment your abilities.

Like a burning flame, Hyperbole relies on a constant source of fuel to power his abilities; though his mutant nature allows his body to handle this throughput, he still needs to provide a power source, and that comes in the form of tremendous amounts of food. Hype's metabolism moves like it has designs on the speed limit, and thus he's essentially always eating. In fact, the lure of constant free food is what tempted him to accept Project Corona in the first place, in spite of his contrary nature. He's looking to make close friends with the chef.