Conceived on the eve of his forced retirement from the Wraith Syndicate , Nikolai found himself alone with nothing more then a black book filled with contacts, four Swiss bank accounts, a few Arachnos uniforms and a farewell fruit basket courtesy of Ghost Widow. Nikolai set himself on creating an organization that would better suit his own interests, initially that was the plan though slowly its evolved into something else entirely.

Club Midnight Obscura was created on 07/07/07 along with the lovely Diavolina Nailo, the club scene is mostly dedicated to Industrial, Gothic, Dark Wave and Trance. Though lately he and some of his business associates have agreed to do "Theme Nights".

So far they've created Disco Night, Toga Night, Jazz and R&B Night. Monthly events such as Black and White balls and fund raisers are in the works.

Nikolai de la Larken - A rather peculiar man who tends to stand alone in the shadows as his staff work, smiling from time to time as he gazes at his silver with gold filigree pocket watch. On rare occassions he'll take over for DJ Azirael to spin his own sets for the crowd.

Diavolina Nailo - Nikolai's right hand gal, a beautiful yet stern blonde bombshell whose always to the point. Diavolina coordinates the general day to night festivities, manages payroll, new hires and beverage orderings. Often more strict then Nikolai, she has this unnerving habit of appearing right behind you when you least expect it. . .

Aaron Sum - A little bit Thai, a little bit rock n' roll. Another resident technician who keeps the club running smoothly with the aid of his robotic minions.

Adrien Dantias - A man who can get you anything, seriously.

Arianna LaCentime - Part time greeter and server for the club, is often seen after hours cleaning up and rearranging the furniture for the next event. Most of her time is spent studying and is often found upon the steps of Aeon University.

AshenFall - A ghost of a woman who simply wandered within and decided to stay, she's quite a friendly soul. Just have to get past the unsettling demeanor and the constant feeling of dread she carries like a sack of drowned kittens.

Dr. Dawson - Dawson, Doc, that guy. Dawson goes by many names but when it comes down to it. The Doc is always there to patch you up. . . just don't be surprised when he mocks you when you wake up after drinking yourself into a near comatose state.

Ebon Scarab - Runs back stage security, along with the others who happen to be there. Doesn't seem to mind that his general back up happens to be a legion of the undead and automaton ninjas.

Half-Jack - A woman who walked in one day, asked for a meal and just simply started to fix the DJ booth and sound system with little to no provocation. After she figured out how to increase the sound quality from the left row speakers, Jill soon found a job as the clubs audio technician.

Kaschei - Long time friend and associate of Nikolai, Kaschei often finds himself on the wrong end of the barrel when he and Nikolai go out for "Supply Runs" or "Tail Chasing". Having a friend who can manipulate radiation does have its perks, free power source. . . just have to collect some samples for the machines. . .

King Genesis - Club Midnight Obscura's bartender, with access to the internet through his cybernetic suit (which in turn allows him to make any beverage ever concieved) along with his automaton ninja's who often deliver the drinks and snacks to the club patrons or act as on the call security when a particular brute has had one to many to drink.

Lord Voodoo - A former Voodun priest whose more or less recently arisen from his grave, a pleasant individual when he's not summoning the undead in the middle of the dance floor.

Obsidian Night. - Not much is know about her, she seems to keep to herself though often opens up if drawn into an interesting conversation. She's a welcomed addition to the staff.

Marie Jean - A woman with the right connections, nothing is out of her reach and when its all said and done. The customer will more then likely be happy with what they've recieved.

Rafael de la Larken - Nikolai's brother, while not "working" for the club, he's around to make sure no one gets any ideas of misbehaving around Vivian.

Triste Nocturne - A woman that Nikolai befriended awhile ago through an intermediary, through a series of events he offered her a job at the club to suppliment her income.

Vivian de la Larken - Nikolai's younger sister, though she's a bit more cheerful and sarcastic then her older brother. Many consider her attractive if not beautiful, but most know to keep their mouths shut when Nikolai's around. 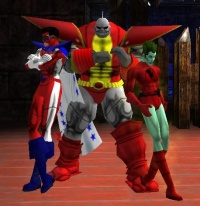 Heroic Costume Night - A success, many a contestant entered with their own renditions of hero costumes. Yet unforunately only three were able to win. Garret Prince (American Hero), Tenkalus (Captain Planet) and Shock Jaw (Colossus) were the winners of our first "Heroic Costume" night. Members of the Giordano's, Kingsmen's and SilverMoon Pub and Inn attended the event and through all the dancing, merry making and an ill fated drinking contest. It went well and many are looking forward to the next event hosted by the club. Plans are already in place for the next event.

A wide range of people gather to relax and mingle within Club Midnight Obscura, most notable would be those associated with the following, The Giordano Family ,The Kingsmen ,SilverMoon Pub and Inn ,The Coup de Grace, Iron Fist Dojo and The Blackest Heart.

Currently in the works

"How active are you with your events?"

Fairly active when running events, we generally host one to two "Open Nights" a week where everyone can come to mingle, role play and listen to whats being streamed. If someone approaches us a week or two in advance we can host a specific event inwhich only a particular set of guests can enter, unless they'd like an open night as well. Though through all of this we realize that peoples lives come first, so it isn't uncommon to see people who are inactive for up to a week or two on our roster. If you're looking for a group where theres a constant stream of people coming in and out, we may not be the best fit for you. Many consider us to be a Casual Heavy Roleplaying Group.

"What's your take on MRP and it taking place in the club?"

It's situational and questions can be asked if anyone is unsure as to whats alright, while its a club we do realize that people are going to drink and get a bit rowdy IC (In character), but anything else (Sex and drug usage for example) should be taken into team chat inwhich conversations and emote actions are held. A single warning will be issued and if its ignored, entry will be denied up to a week if not permanently. Perhaps it's a bit harsh, but we have a variety of people who come and go into the club and we'd like to provide a fun, friendly and exciting atmosphere for all.

Always, though we're looking for characters that would get along with a wide variety of people. Considering you've got a club owner who can summon the undead, a cybernetic bartender with automaton ninja's, a sweet yet serious blonde bombshell coordinator. . . not failing to mention the wide variable that is our club customer base, it'd be more enjoyable for all those involved if they were group players. Being alone to persue your own interests and storylines while being a part of the group is understandable, but if the character isn't helping at the club functions then it defeats the purpose of "working" at a night club.

"What are your IC club positions?"

The best way is usually through mail, sent to either Diavolina Nailo, King Genesis or Nikolai de la Larken. From there we'll contact you and set up an IC/OOC meeting.