Kid Regal identifies with his own personal hero and genetic donor Mr. Regal of the Paragonian Knights. His clothing preferences tend to mimic his only with a more modern or even futuristic bent. Only having arrived in this century about a year ago due to an accident with a Time Engine. He has yet to meet his "ancestor" or even the supposed relatives in this time. Comet 202 who is currently Regal's fiance as they have yet to marry. Or Major Supernova who it was revealed to be Regal's future biological grandson.

The other affiliation he is tight with is the All Star Teen Sentinels. Having been asked to personally join by Kid-Olympus, after he was found wandering around rather confused in Atlas Park on his arrival. Kid Regal instantly agreed, being in complete awe of where he was at the time. With the first meeting of the team they found he did not have an actual name. After many debates Bodkin-Girl, Kid-Olympus, Shade Girl, Ace Troubleshooter and the rest of the team voted to name him Ben.

Kid Regal tries to keep a good perspective on things. He's quick to make friends. Also has a tendency to be in complete awe of most modern heroes. Trying to get them to sign an autograph book of sorts so he can show his friends if he ever gets home. Unfortunately due to his circumstances he worries all the time about messing up time lines. He wants desperately to insure he will exist and not be erased, hence he spends a great deal of work time at the monitor desk.

Kid Regal has quite a number of powers. They divide into two catagories. Those previous to the time accident and those created due to the accident.

His previous powers were warped by the time accident. These now include: gravity field manipulation; kinetic transference; flight; heightened senses; and speed. He is still discovering new powers in this time and trying to cope with them.

Kid Regal is good at hand to hand combat when forced into it. Vesper Sparrow trained him to handle himself if his powers ever failed. Or if an enemy managed to get through his defences.

Kid Regal lives in absolute fear of Crey Industries both current and future dragging him in to be used as a lab rat.

Also rumor of some sort of metal that could make his life difficult but he has not said what it is.

Carries an item called "The History Crystal" which looks somewhat like a modern PCPD police scanner. He can plug in names and dates to find specific information.

The other item is a Sonic Screwdriver sort of a 45th century Swiss army knife.

Lastly he has built a couple of hover boards and is trying to teach Star Lad how to use one.

"Subject 0000001 Prime Alpha now receiving schooling and knowledge. Subject has undergone vat growth to equivalent age of 15. Mental capacity listed as IQ 200. Sensory input is at meta-human levels as ordered by Science Department Chairwoman. Speed and endurance will be boosted. Flight abilities are possible. Strength has been measured in tons. Strange anomoly has been detected in physical make up. Continued genetic theropy may eliminate it."

"Turn that off computer. What is the Countess going to say?" Chairwoman Anna Davis hung her head over the display built into her desk. She could already hear the security division soldiers approaching her door. A personal visit from the Countess could always go one of two ways, honor or dishonor. Anna knew what was coming. Her doom.

Anna stood at attention. The woman who walked through the door was dressed in basic corporate black and white. Her demeanor imperious. Two battle armoured guards took up stations by the door. ~Be seated Anna. You may address me as Your Grace or as Madame President~ The voice drifted through Anna's mind. She had forgotten about the crushing psionic powers she had displayed on numerous occasions.

Anna bowed and came out from behind the desk and sat in one of the cushioned chairs in front of it. The Countess took the seat behind the desk. "Now then. What is this about Subject 0000001 Prime Alpha? I went to visit the cloning lab and the primary lab it locked up. There was an odd smell of scorched electronics and the system there was on back-up generators. Explain this to me."

Anna licked her lips nervously. "Well you see Madame President. There was a slight miscalculation in the growth serum and the Subject has seemed to have developed a mutation. A flaw. But that could be remedied if you give us time."

"Define this mutation for me. I was unable to get into that lab. I want to know why its locked down. I wanted to see the triumph of our science. Mr. Regal's DNA is worth billions on the market due to the fact he has become extremely cautious about leaving even a strand of hair any place he has been. Previous attempts have failed. They finally killed Sovereign Charge, the second clone ever produced. And that product was several hundred years old. Regal is several thousand! Imagine an heir to that legacy. Our clone must be perfect."

"Yes Madame President. But you must understand we are dealing with a mixed DNA. His own children, grandchildren and many great grandchildren are deceased. Yet he lives on. We can not even get close to him. He's hidden himself away again from humanity."

"I don't care. I will have a perfect clone. Do you understand me? The cornerstone of our new meta-human powers program depends on this pro. . ."

Alarms started sounding. The buildings lights changed to a defensive red color. Calls went out to guards and a fight could be heard. Then the building shook. "Anna explain this."

The door burst off its hinges. A figure stood there siloetted by the flames of a burning office. The groans of security guards could be heard. "I want all the information on Prime Alpha. You will give it to me."

Incredulous the Countess glared at the figure. "And who are you to make such demands?"

"I'm Subject 0000001 Prime Alpha." He stepped into the illumination of the room. "And I am declaring myself an Emancipated Minor. You and your people have gone far enough. I have everything I need. My growth pod is destroyed. I'm sorry to have hurt the scientists and the guards but it was the only way. I will not be your super-weapon. You created me to have some individual thought and the schooling over the last few weeks has awakened me. "

He held up the barcode stamped on his arm. "No more of this series will be produced. Give me the files or I will go to the main AI and shut it down. Permanently."

~I don't think so. You are a product of this company and as that you are property. Guards! Red threat level lethal force is authorized!~

"Must do as Her Grace commands." she slumped over on to the floor. Poisoned from a tooth capsal.

"No! Dammit!" he slammed his fist into a wall. It shook and tiles fell from the ceiling. Regaining some control of himself he took stock of his situation. Have to think. Where did the scientists keep the clothes. He ran up to a list of various floors mounted on a wall and scanned it over. Grinning he opened the door and jumped down the shaft. Stopping at the proper floor. The guards were waiting for him.

"Hi guys! Could you direct me to the nearest clothing shop?" They opened fire. "Guess not." Dodging around the bullets and energy blasts he punched out a couple of the guards. The rest quickly surrendered and looked at him nervously. He walked up to one that was his height. "You'll do."

In a blink of an eye the guard was stripped down to his underwear and he finally had some clothes. "Well guys thanks for the party but I'll be going now." He ran out the way he had come in and jumped down the shaft to the lobby floor. Corporate types stared at him as he walked out the door. Then he stopped and turned back around. Putting his head back in the door he said, "Give my regards to the Countess. She's going to need it." Grinning he ran off into the night.

The police special operations had been put on high alert. Prime Alpha took it upon himself to try and avoid all patrols within the metroplex. "But where to go. . ." he spoke out loud to himself.

He had gone down a dirty trash filled alley. According to all the information that had been crammed into his head the area was called Undertown. It was one of the Crey Metroplex slums. It was considered a place to dump chemicals, wastes and failed experiments by the Crey Industrial Collective. Years before one of the Countesses had made deals with another set of competitors known as Nemesis and the Clockwork King. She also contracted out with Malta to train her troops in paramilitary strategy. The Clockwork bots and Nemesis androids were used as patrols in Undertown.

Nevously he looked about himself trying to be sure he wasn't spotted. A scream split the night. On instinct he ran toward the sound. Rounding a corner a girl was backed against the wall by several mutated gang members. He approached them at a run. "Hey! Why don't you pick on someone a little more your speed." He snapped at them.

They turned around branishing various implements of destruction. Then the smallest of them suddenly grew into the largest. Brimming with muscles and spikes of bone. That made him stop a moment then he set his jaw and waited for who would throw the first punch. It came from an unexpected source, the girl wasn't so helpless after all. She blasted him with ice. He smashed through it.

"So you are the one the Crey are all excited about? My boys and I will claim the bounty on your head."

They all dog piled on him at once. Many punches, blasts and screams followed. One by one he threw them off till he was down to the girl and her brute of a boyfriend. She surrounded him in a ring of fire while the other surrounded himself in fire and came at him. Not noticing the figures landing around them until Prime Alpha became invisible during a punch toward his face. Even he was surprised. The brute was suddenly being held stationary in the air. Another kid was there shooting bands of force at his enemy. A girl suddenly appeared and began turning the ground into mud. Several more showed up all in similar uniforms. They brought the two attackers down.

"We've been looking for you." a boy with some sort of bird symbol on his chest said.

"Good. then you know we will not harm or hinder you in any way. I'm Vesper Sparrow. My companions Beta Sprite, Ultramagi Girl, Star Spectre, and Intellect Kid. What shall we call you?"

"Now there is a good question. I don't really have a name."

Beta came up and whispered something to Sparrow. He nodded and continued calmly looking at 0000001 Alpha Prime. "You look exactly like someone who would probably be glad to see you. An old retired hero, well respected over the centuries."

"No doubt. We knew the Crey were cloning again. Okay we'll welcome you into our ranks, Kid Regal." he turned and walked off into the gloom not making a sound. 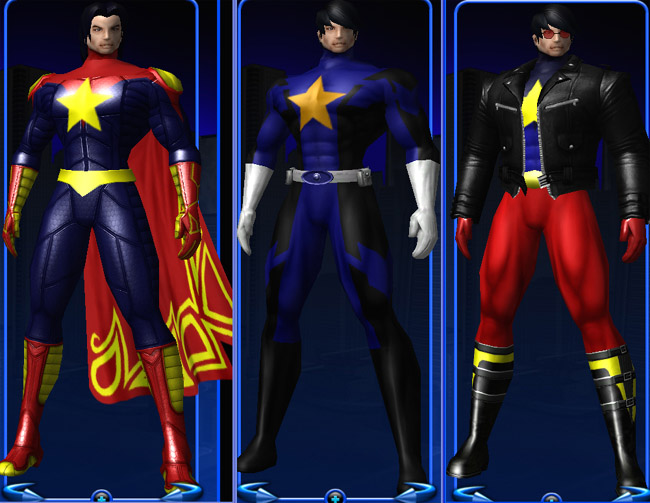