Bodkin-Girl defines her crimefighting career by her affiliation with Captain Crosshairs of the All Star Sentinels of America. All of her costumes are based on those worn by the Canadian hero, not to mention Bodkin-Girl also uses archery to defeat her enemies. She has been working with Cap for over a year now, and has improved greatly in both archery skill but moreso in strategy in tactics. Since her parents have no knowledge of her "extra-curricular" activities, she has come to think of Cap as a father figure of sorts, but also looks up to him as a personal hero, many of her personal interests (such as music) are heavily influenced by those of Cap.

Second-most important in Jen's life is her team, the All Star Teen Sentinels. She joined the team almost immediately after its creation by Kid-Olympus, and is considered a founding member along with Kid-O and Schattenmaus. Most of the friends Jen has made in the superhero community are members of this team. For example, Jen met her closest friend, the Sentinel of Twilight while teaming up with her on an assignment. The two girls have a very deep, strong friendship, and have been there for each other through both good times and bad. Jen has discovered two of her classmates from Paragon City High School were also teammates American Promise and Omega Lass. Jen is very close friends with both girls, formerly sharing a room with the latter when she stayed overnight at the ASTS base, until Omega Lass left the team. She has recently returned, but due to some major base renovations Jen has her own officer's room now.

Jen has also developed a strong bond with the heroine Ultradynamic. Natasha has gone out of her way to be there for Jen, from comforting her after her breakup with teammate Cole Snap to training her in hand-to-hand fighting styles that better fit her size and gymnastic ability. Natasha kept up this friendship even during the brief time when she had stopped dating Cap, and Jen has come to see her as a big sister of sorts.

Jen almost always has a positive, enthusiastic outlook, she's often called perky by her friends and teammates. While no super-genius, she is a very smart girl and learns quickly, which often gets her out of close calls caused by rookie mistakes. She makes friends easily, and holds loyalty to these friends as one of her most valuable virtues.

Bodkin-Girl has no metahuman powers.

Jen is extremely skilled with a bow and arrow, she is able to make very difficult shots in intense situations. She is also an accomplished gymnast, and uses this to her advantage in the field, performing agile maneuvers to get to a hard-to-reach lookout perch, or squeezing into places too small for Cap to fit. Thanks to Ultradynamic, she is starting to be able to handle herself in melee combat, at least against foes that aren't noticably superhuman, such as various hellions, the Lost, and initiate members of the outcasts.

Bodkin-Girl is, for all intents and purposes, a normal seventeen-year-old girl and, while in very good shape, she has all the weaknesses and limitations thereof. Also, due to being both physically attacked and later kidnapped by her, Jen is terrified of Reichsmaiden

She cannot be teleported without experiencing some degree of nausea (depending on the skill of the caster and the distance teleported) which is barely noticeable with base teleport equipment, as it is usually fairly state-of-the-art.

Bodkin-Girl uses a modified compound bow to compensate for her small frame and subsequent relative weakness. It was designed by Captain Crosshairs specifically fit to Jen's size and shooting style. 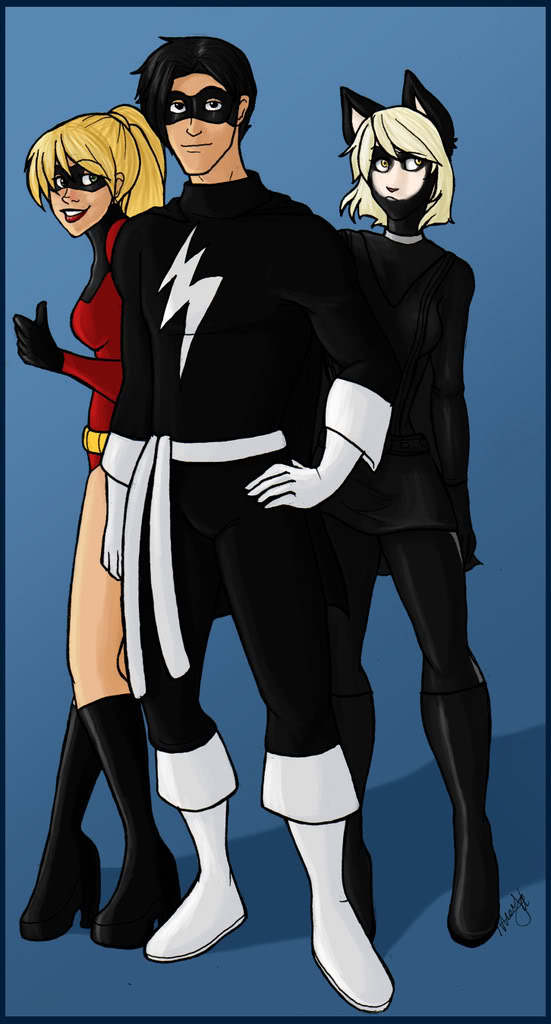