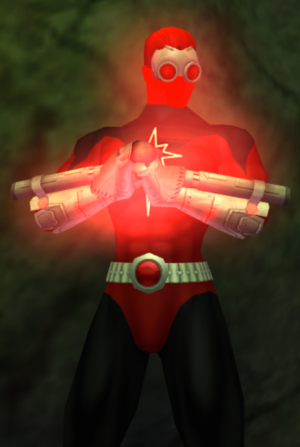 A two-bit hoodlum from Brickstown, Joe Jackman spent the first quarter of his life committing petty crimes, and developed a particular habit of robbing liquor stores in his late teens. After spending the majority of his twenties in and out of the Ziggurat, he started to wish he had been blessed with superpowers (if only so he could punch heroes in the face, as he had no intention of going straight). That wish was granted on 31 October 2011, when Jackman was thirty-two years old.

That Halloween night (wearing a cheap Ronald Reagan mask to hide his identity), Jackman held up a liquor store on the edge of Perez Park. Everything was going smoothly until he turned to make his exit and found the superheroes Android and Brickyard standing in his path. Desperate not to go back to jail, he bolted across the store's counter and through its back rooms, eventually managing to flee through a fire escape at the rear.

All too aware that the heroes would give chase, Jackman climbed the wall into Perez Park and ran deep into the woods, sprinting until he felt like his lungs were going to pop. But he stopped short when the sky above suddenly exploded in flames, and a bizarre object crashed into the park a few hundred yards ahead of him. Cautiously, with sirens wailing in the distance, he approached.

Jackman found himself following an eerie red glow through the trees until he entered a clearing, where he found what he later described to his underworld acquaintances as a "big metal thing" half embedded in the earth, bathed in a crimson light. Never one to turn down the chance to steal some expensive technology, Jackman found his way inside and discovered a strange humanoid lifeform – either dead or unconscious – at the UFO's controls. Jackman then did what any good criminal would do: stole its goggles, gloves, belt and suit and ran away as fast as he could.

Over the next few days, Jackman paid close attention to the news, expecting to see reports of an extraterrestrial discovery in Perez Park… but none came. Instead, a joint D.A.T.A. and S.E.R.A.P.H. task force silently cleared the site, later discovering that the alien craft had originated in a solar system somewhere on the shoulder of Orion, and that the energy contained within (since secretly designated "Orion-6") has the power to bond to human hosts.

Jackman didn't discover any of the finer details until later, but he certainly became aware of Orion-6; within a week of his ill-fated robbery, his body began to glow a soft red… and then a brighter crimson… and then a blinding scarlet, as volatile energy began to emanate from his skin. He found only one way to control it: to don the alien pilot's belt, which allowed him to regulate its flow and intensity.

It didn't take long for Jackman to transition from abject terror at the sight of his bodily transformation to being really quite pleased with the situation. After all, it's easier to rob liquor stores when you can shoot laserbeams from your hands.

After discovering his powers and honing their use with the help of his stolen extraterrestrial technology, Jackman embarked on the career he had always wanted: costumed criminal. He began with a number of simple heists, robbing banks, ATM machines and, of course, liquor stores. This string of robberies drew the attention of several Paragon City heroes, but none more so than Android, who had been tasked by D.A.T.A. and S.E.R.A.P.H. with tracing Orion-6's energy signature as it appeared all over Paragon City.

Android caught up with Jackman during his attempt to knock over the Golden Vault in Steel Canyon, purportedly one of the most superhuman-proof banks in all of the United States. The battle that followed caused property damage running to millions of dollars, as Jackman attempted to cut the hero in half with his razor-sharp energy beams. When the battle was over, Jackman had finally been defeated. The following day, as he headed back to the Zig, Paragon's citizens were reading all about the new villain the newspapers had dubbed "Laser."

Jackman was tried under his alias for superpowered robbery and sentenced to sixteen years in prison. He remained there until 30 November 2012, when he was broken out by Baron Blitzman during the Battle for the Multiverse, an event that saw Rularuu the Ravager escape the Shadow Shard and absorb thousands of dimensions. Laser aided in the battle against the Ravager's horde on the streets of Brickstown and, once he was defeated, disappeared into the sewers and went on the lam.

In the aftermath of Rularuu's attack, Laser met with several other villains who had frequently encountered Android and Brickyard, and four of them – Laser, Outline, Reacto and Coldray – decided to join together as the "Fearsome Four" for mutual protection. Or, at least, that was the original goal – before they got a little carried away. Together, they attempted to take out Android and Brickyard for good over a two-year campaign lasting until 2014… and, of course, they ultimately failed. Eventually all four men were defeated, arrested and sent to the Zig.

They remained incarcerated until 2020 when they, along with several other supervillains including Arsoner, Coalmine, Killer Chill and Datamind, were freed from jail during an assault by an army of as-yet unidentified assailants who were invisible to the prison's security systems. They were smuggled to the Rogue Isles, where they were invited to join the ranks of a new criminal organisation named C.R.I.M.E. or (Crooks, Rogues, Ingrates, Mercenaries and Evildoers), a group set up to directly oppose the supergroup The T.E.A.M., established by Android and Brickyard in 2012. 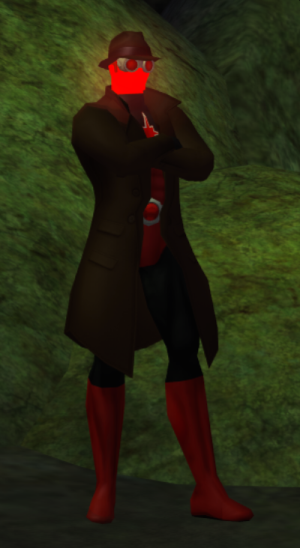 Laser's body is imbued with an extraterrestrial substance that S.E.R.A.P.H. has dubbed "Orion-6." It has been theorised to be a renewable energy source developed by a far more advanced civilisation, designed to replace fossil fuels – but all Laser knows is that it makes him incredibly hard to hurt and allows him to shoot laserbeams at people.

However, Laser is not able to control those abilities without the aid of technological devices stolen from the pilot of the alien craft that gave him his powers. The pilot's belt allows him to regulate the intensity of the energy flowing through and from his body (thus preventing him from destroying entire city blocks), while its gloves allow him to shape his energy blasts into razor-thin beams that can cut through four feet of solid steel.

Additionally, Laser also possesses the pilot's flight suit and goggles; the suit contains tiny anti-gravity repulsors that, when activated, allow its wearer to fly. Laser has yet to figure out the exact purpose of the goggles, but he does know that they grant him x-ray vision if he presses the right button.

Laser was once a member of the group known as the "Fearsome Four" with Outline, Reacto and Coldray: opponents of the heroes Android and Brickyard who banded together for mutual protection. He has also been known to work for several of the most high profile villain groups in Paragon City, including the Outcasts, the Freakshow, the Carnival of Shadows and several factions of The Family, including the Marcone and Verandi crews. He has also worked in the employ of several villains with far loftier ambitions than his own, including Earthworm and The Baron. However, he makes a point of refusing to work with groups he considers to be fascist, including Nemesis, The Council, the Fifth Column and, despite now living in the Rogue Isles, Arachnos.

Laser has recently become a member of C.R.I.M.E., a large and fairly informal coalition of villains who have banded together in the hope of destroying The T.E.A.M., a group of heroes who have frequently been responsible for many of its members' arrest and incarceration. Laser was asked by the mysterious benefactor of C.R.I.M.E. to sit on its governing council, though he has no real interest in power; he is solely interested in monetary gain.

Laser's closest allies are his criminal associates in C.R.I.M.E., particularly those who used to be his teammates in the Fearsome Four: Outline, Reacto and Coldray. He also calls several other members close allies, including Datamind, Coalmine, Arsoner, Killer Chill, Great White and Revolver II.

Laser has a particularly bitter rivalry with the hero Android, who – along with Brickyard – is partially responsible for giving him superpowers. He has also tangled with several other members of The T.E.A.M., including Metal Mage, Springfoot , Canid, Fastback, Blacksmith and Warp. And, although the Freedom Phalanx probably have no idea who he is, he is not particularly fond of Manticore.